Hi y’all, I haven’t written for awhile. I’m spending a Friday night looking at pictures of aliens on mars and checking any new 2012 Doomsday Prophecies. Now you might think the Devil would want all that destruction and end of the world stuff. Hell No!! In anybody’s version, the end of the world is where all the fun stops and you know who is kicked into the fiery pits to burn for all eternity. Does that sound fun to you? No, I hope the world will go on for a long, long time.

Which is what pisses me off about Christians who can’t wait until the End of Days! Ok, I know they’ve been waiting around for a long time to be vindicated, and have Jesus fly down and tell them they were right about everything all along, but damn if those freaks aren’t super creepy. There’s a sick, self-righteous pleasure in hoping cataclysmic disaster will decimate human civilization, so that those chosen few (who did little actual good in their lives except get lucky and ‘find Jesus’) can go sit and heaven and laugh at everybody else (all those folks who believe in evolution) burn in Hell.

For example, check out this video. Rather than giving any useful information (I guess they’re assuming viewers already know about the wacky theory of a planet X, nibiru, on a long eliptic orbit which comes near to earth every few thousand years so that its sentient beings can interact with earthlings) they just show lots of pictures of chaos and destruction of a big planet crashing into earth. BOOM. Bye Bye Blue Planet. At the very end of the clip, there are a few Bible passages. The message is clear: the world is going to be destroyed in a couple years by a distant alien planet, and so you’re running out of time to accept Jesus and be SAVED instead of burning in Hell like everybody else. 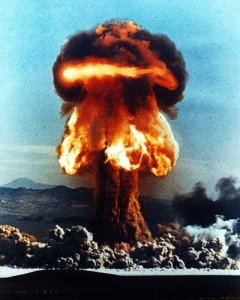 special? Cuz the Mayans predicted something bad would happen then. Did the Mayans have Jesus? NO! What did they have? Science. Do you think Jesus, on his own, could figure out the planetary orbits and precession of the equinoxes and predict 36,000 years into the future? Don’t you think those Mayan Gods, whoever they were, would’ve eaten Jesus for lunch? Not to mention the alien civilization from the planet Nibiru – Do you think they’re going to care what religion you are? Do you think Jesus is going to protect you as they murder and rape your family? Hell, maybe they were the originally “Giants” mentioned in Genesis who mated with humans. Did God stop them? Does God ever stop anything bad from happening?

Sorry, I’m ranting… it just gets me worked up. You’ve got the US government scaring people into giving away all their rights and freedoms, through a campaign of terror and lies, and you have Christian groups scaring everybody into turning to Jesus… wouldn’t it be nice if people could suck it up, read a few books and make their own intelligent decisions? But what the Hell do I know.