I’ve come across this fascinating list on The Divining Blog: “25 myths about religions around the world.” A list like this, debunking common misconceptions about religions, is much needed – but the list from the Divining Blog mixes some blatantly obvious truths with some much more subtle. It should really be called “25 silly things Christians believe about religion that aren’t true.”

I would go so far, in some cases, as to argue in favor of the myth, rather than against it. (If something is true 80% of the time, is it worth arguing that it isn’t always true?)

So here is an edited short list of my responses.

7 Common Myths About Religions that Might Actually Be True

This myth depends on what your definition of a religion is. If it is similar to what Dictionary.com calls it: “a set of beliefs concerning the cause, nature, and purpose of the universe, especially when considered as the creation of a superhuman agency or agencies,” chances are atheism might fall into the religion category. However, this decision from the 7th Circuit Court of Appeals ruling in 2005 that it was a religion only adds to the myth that atheism isn’t one.

I’m not someone who cares to argue over what the definition of what an atheist actually is; but I’m aware enough to know that most atheists don’t consider atheism to be a religion because it is a lack of a belief, rather than a belief. Even if we amend Atheism, capitalized, to refer to the modern movement against organized religion, it still doesn’t fit the bill. Is environmentalism or the green movement a belief? Is democracy? The modern movement of Atheism is focused on teaching everybody to use reason and science to solve humanity’s problems – without deferring to a “superhuman agency”. However, the Supreme Court recognized that only by falling under the category of “Religion” could it be afforded its constitutional rights

2. Most Christians are Conservative

As with most things, Christians and conservatism changes with time. However, in the most recent presidential election, the opposite would seem more true. In the 2008 election, The Daily Mail reports that 54 percent of Catholics voted for liberal Barack Obama, with only 46 percent voting for more conservative opponent John McCain.

The troubling thing with this passage is the leap from “Christians” to “Catholics”. Comparing 46% and 54% is like asking “Is the glass half full or half empty?” Can you really say that “the glass is mostly full?” No – neither are Catholics “mostly liberal; and I would bet that if you took into account all Christians in America you’d get a different story. And who cares who they voted for? How about checking whether they support gay marriage, freedom of Atheist advertising, abortion, and health care? While there are some liberal Christians, I’ll keep my myth about most Christians being conservative.

3. Only Christians go to Heaven

While everyone may believe that his or her religion is right, do they believe only “their kind” will be allowed into heaven if they are Christians? The little discussed matter is actually debunked on Beliefnet. Using a quote from the Pope, they report that “those who live in accordance with the Beatitudes–the poor in spirit, the pure of heart, those who bear lovingly the sufferings of life–will enter God’s kingdom.” Other Christians are reported as giving similar answers.

Do I think it’s true that only Christians go to heaven – or that anybody goes to heaven? No. One of the main reasons I left Christianity was because of its unfair exclusion of peoples based on purely geographical or cultural incidents of birth. However, despite Beliefnet’s article or even the Pope, it is a fact that many Christians believe everyone else will go to Hell. It is ridiculous for Catholics to say “See – we don’t believe this, so what are you fighting against? Oh – those fundamentalists? But they’re wrong… so just ignore them.” Rather, I ignore Catholics because they are often smarter, more open-minded and don’t cause trouble. The problem – even if in the minority – are the very real hundreds of thousands of Christians who believe I and everyone else not Christian will not be saved, and that God chose them to save us.

With creationism and evolution seemingly clashing on the battle of the true titans, the issue of the dinosaur’s role in Christianity is ironically taken on by Answers in Genesis. How they came to be and there ultimate extinction is discussed with many quotes from the Bible.

The fact that anybody in the world believes that dinosaurs didn’t exist, and that this is a “religious debate” rather than a case of ignorance, blind stupidity or mental illness, makes me feel like pulling my hair out – as does the answer given: basically, dinosaurs DID exist and are mentioned in the BIBLE, but existed less than 6,000 years ago, fought with humans, and were too big to go on the Ark! (I’m hitting my head into the desk now.) 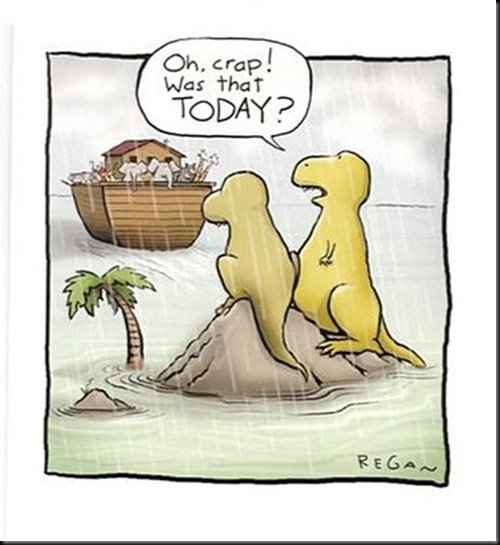 Although the story of the son of God getting married should have made it into the Bible, believers of this possible myth say that it was edited by those who opposed the union. In a lengthy response, Revered Dr. Mark D. Roberts takes on the topic. He uses biblical references and even the history of the era to discuss.

This one is more tricky: it is a common modern myth that Jesus and Mary were intimate or possibly married, thanks mostly to the Da Vinci code. And there is evidence for it – however there is more evidence that Jesus and Mary are literary characters rather than historical figures. So were they actually married? Not if they never existed. But did the authors of the story see their literary characters as married? Not really – but as spiritual personifications of the Logos and the Sophia, they are destined to be rejoined, and it is that mythical rejoining which predicated Christian ritual (of being married to Christ, dying to the old self and putting on a new body, etc.)

Among other religions, Christians are often referred to positively in the Islamic holy book, the Qur’an. According to Huda, the About.com Islam guide, Christians are “people who have received and believed in previous revelation from God’s prophets.” There are also several other relevant quotes regarding Christianity.

Yes Muslims believe that Jesus was a prophet and that Christians have some good teaching. This does not mean Christians are not infidels, and that it is not OK to kill Christians if they won’t convert. Islam is kind of like a dominant form of aggressive plant life. It is in its nature to grow and reproduce. Even if Islam “Allows” other religions (and I’m pretty sure it doesn’t) it would continue to try and convert unbelievers until there are none left. So “allow” isn’t really the right phrasing – what we need to ask is whether Islam can peacefully coexist with people of other faiths. The answer, every where and for all of its history, has been No it can’t.

The short answer to this according to Ven. S. Dhammika is “no.” Because religious ideas and especially god have an origin in fear, this is one of the main reasons Buddhists do not believe in god. He also uses quotes from The Buddha and other teachings.

This is more of a half myth. Using karma as more of a basis, they believe that it is the driving factor when undergoing reincarnation. The thinking that a person’s soul goes with him or her after death is not believed in by Buddhists.

I’m taking these two together. If we mean “God” as in the angry Old Testament Yahweh, then it is true that Buddhists have a more enlightened idea of divinity. However many modern New Age Christians talk about God in terms of “The Universe” or “The Source” – ideas that they are actually borrowing from Buddhism and Zen, which became popular in the US hippie movement. If we look at the beauty and invisible relationship between all things and call it “God” (as I’m also inclined to do sometimes) then the Buddhist’s God is no different from ours.

Likewise, with the concept of soul Buddhists are not that different from other religions. They believe that they will come back in a different form and that something survives after death and that their identity may sometime join the All. I fail to see the distinction: Christians believe their soul will go with them? As in, they are their body and both their body and soul will be saved? The idea of an eternal body is a perversion within Christianity, rather than a mistake in Buddhist thinking.

However: Buddhism is a religion, with rules, ritual and dogma, which means it often suffers from righteous thinking, obstinacy, and even militancy. While I agree with most of the philosophy, I heartily oppose much of the practice.

It’s far easier to list things that religions believe that aren’t actually true. You could argue that everything they believe is actually a myth – but I’ll restrain myself to the things every educated person knows about Christianity that Christians themselves don’t know.

1) Jesus taught a new system of goodness and morality

Actually Jesus taught absolutely nothing new. Christianity’s uniqueness comes from the innovative claim of his followers that Jesus was the son of God in human form – with an actual body – and like him their physical bodies would be raised. (Although even this physical body part was already present in lower Egyptian cults that emphasized a physical resurrection – hence the mummies.) The truth is there is nothing in the Bible that is new, and if Jesus was a real person, he borrowed extensively on the Stoics and Jewish-pagan cults like the Essenes.

Not true. They were written by communities claiming to have apostolic tradition stemming from a historical founder (although the earlier writings were probably created and regarded purely as spiritual literature). Check out Bart Ehrman’s new book Forged in the Name of God, or even Karen Armstrong’s The Bible.

3. The World Will Come to An End with the Return of Jesus

This mistaken belief has caused a lot of grief recently with Harold Camping’s 5/21/2011 prediction (which has now been shifted back to 10/21/2011). Whether or not they gave their life savings to Family Radio, most Christians believe in an End of Times when Jesus will sort the believers from the trash. These beliefs came from Stoicism, mystery cults and pre-Christian systems and Christianity actually attempted quite strenuously to invert the general consensus by arguing for an internal spirituality: The Kingdom of God is INSIDE you. I will come in YOUR lifetime.

Christianity’s continued desperate reliance on this motif is necessary since it lost its connection to intimate, personal experience of “reality” (I’m conscientiously avoiding the term “God” which I usually use but is misleading). The only way it could fulfill its promises was to say “Don’t worry, you’ll see the benefits someday – at the end of time.” But this is a Pagan belief Christianity usurped, rather than a Jesus-inspired vision.

What do you think are the greatest religious myths of our time? Are some myths necessary for civilization, or can they all be discarded?