There’s always been a little bit of Jesus in Superman.

The story of a man from one world going to another and finding himself with supernatural powers with which to lead a revolution against evil is ancient, but in 1912 with John Carter of Mars, elements of mythology, science fiction and technology begin to blend in new ways, eventually becoming the modern comic superhero.

Salman Rushdie’s Midnight’s Children describes the process of how a historical spiritual guru can be based on a comic book and vice versa.

All of our stories are converging; Hollywood has discovered the “film-by-numbers” calculation resulting in the best, more emotionally triggering plot elements and they make sure to put them everywhere. Matt Damon’s new Elysium looks to be about the same story as John Carter, and very similar to Superman.

Except – although Superman has been around for a long time and keeps coming out with brand new revisions, 2013 Man of Steel seemed more Christian than the others. Possibly this is because there was no dramatic tension, clever dialogue or conversations longer than 1 or 2 blunt sentences. Each word carefully chosen for maximum impact, which felt like a choreographed Maoist propaganda campaign in which actors give lip service to a cause while saying “Look how handsome and rugged I am!”

I wasn’t impressed by the special effects, boom boom boom, more fighting, more fighting, explosions… I realize I’m not the target demographic and Man of Steel was probably aimed at a less choosy audience. But still, a few of the lines and shots seemed specifically, obviously Christian.

Superman’s father sends his only son down to earth, with the DNA of the whole planet. You’d think, just maybe, it was for the salvation and continuance of his own race, to preserve his own species. That’s what it seems to be about. But actually, Superman is told to “Guide them. Give them hope. Embodied in that hope is the fundamental belief in the potential of every person  to be a force for good. That’s what you can bring them.”

So Superman is a message, a symbol of potential.He also has supernatural powers that make him invincible.

“The Earth sun is younger and brighter. Your cells have drunk in its radiation strengthening its muscles, skin, senses. Gravity is weaker. The only way to know how strong you are is keep testing your limits. You will give the people of earth an ideal to strive towards. You will help them accomplish wonders.”

Like Jesus (or Dionysus and many others) he allows himself to be taken into captivity by the humans, even though he could easily bust out of prison. Then, he allows himself to be given up to Zod and his band of alien ruffians. When he has a crisis of faith over whether or not he should sacrifice himself to save the entire human race, he pops into a church to have a chat with the preacher, who tells him “Sometimes faith begins with a leap.”

Later, up on the ship, he loses his powers (like Samson and so many others) but is miraculously saved by divine intervention/Deus ex Machina (literally, “god of the machine” or the incorporeal but omnipotent presence of his dead father). Jor-el tells him, you can save them Kal, you can save all of them. We wanted you to learn what it mean to be human first, so one day, when the time was right, you could be the bridge between 2 peoples. And then, just in case we aren’t getting this rather blunt metaphor for Jesus (the bridge between heaven and earth), with a look of torment, Superman takes a slow, backwards, theatrical swan dive out of the ship and holds a Crucifixion pose for several seconds. 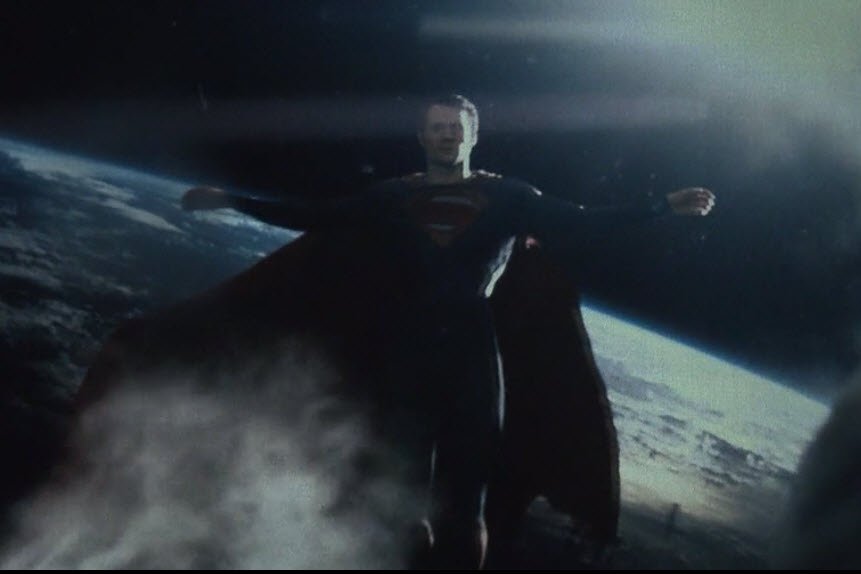 The evil sidekick says: “We have the evolutionary advantage, no morality. Evolution always wins.” The bad guys believe in Science and Evolution. The good guys believe in Morality. Superman is “weak” because he cares for the humans.

Zod of course, is Satan. He exists for the great good of his people. After failed military coup he is exiled (just like Satan was) and resolves to get back at God/Jor-El however he can:

“I’m going to make them suffer, these humans you’ve adopted, I’m going to take them from you one by one. There’s only one way this ends, either you die, or I do. If you love these people so much, you can morn for them.”

Satan/Zod tries to kill a nucleur family. Superman suffers between his awful choice, either kill Zod or let the family die.

“Stop! Stop!” he bawls like a little girl, absorbing all the pain in the world.

Then he kills Zod and saves the world.

We don’t really understand what the hell Jor-El was thinking. Does he really prefer the humans to his own race? Why did he steal the codes if he didn’t want Superman to use it?

Jor-El told the council they were destroying the world but was too political and patient to do anything about it. Zod was the one who stepped up and tried to take control before it was too late. He was in total agreement with Jor-El except he had the balls to take decisive action. For this he was imprisoned. Then, his entire planet destroyed, he takes it upon himself to seek out the codex and restore his civilization to life; a noble cause, one that Superman denies. Just like Satan (I’m thinking of Milton’s version), he’s frustrated by powerful autocrats and tyrants making nonsensical decisions; when he tries to interfere he’s kicked out. He’s forced into the role of evil because he’s trying to make critical decisions about the survival of his species.

On a metalevel, human beings destroy hundreds of new species each decade and we don’t give a damn. If we have to choose between a human child and an orangutan child, we’ll pick the human every time. We don’t HAVE a morality that includes species-equality and the sacrifice of humanity to preserve other species. In our own history, the superior race will always take over the land and massacre the presently inhabiting but technological inferior race (this is even sanctioned by the Bible; and the Bible was used to justify the conquest of the Americas).

So where do JorEl and KalEl get off refusing Zod’s intentions; it’s a little twisted. It’s as if I decided to wipe out the human race entirely because we were affecting the whales, who were here first, and think myself morally superior for selling out my species.

Anyway, confusing principles, and like usual, Superman stands up for “RIGHT” and “JUSTICE” and “GOOD” using his powers and brawn and pea-sized brain and “MORALITY” to justify his largely erroneous ethics.