Yesterday I read Graham Hancock’s Supernatural: Meetings with the Ancient Teachers of Mankind  (2007). Basically, without coming to any conclusion or positing any credible theory, the purpose of the book is to point out some pretty astounding similarities between ancient pre-historic cave drawings, traditional accounts of fairy lore, modern scientific experiments with DMT, and alien abduction testimonies.

Shamans from many world cultures have used combinations of plants to communicate with “higher-beings” of some kind who teach them things. But contemporary UFO abduction stories, descriptions of trips on mushrooms, DMT or other natural substances, and traditional accounts of fairies have a lot in common that defies cultural boundaries:

There are enough startling parallels for Graham to build the case that there is a big mystery here that cannot be explained. At the outset Graham makes clear that he doesn’t believe in “extraterrestrials” as in real aliens, but also that there seems to be some kind of “reality” which exists apart from our own, which humans have always been able to access, with consistent results:

SO if we were smart, we would listen to what the shamans have to say about the true character and complexity of reality, instead of basking mindlessly in the overweening one-dimensional arrogance of the Western technological mindset. 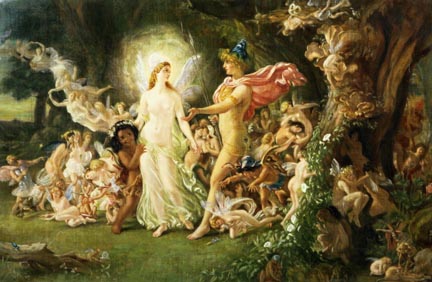 If these visions were productive, then they would vary with each individual’s background and culture. Instead, they are remarkably uniform across all boundaries. This means that they must be “hardwired” into humans somehow; the most obvious place for this to take place is in the “junk DNA”. Careful not to overstep, Graham ends the books rather suddenly, inconclusively, without offering any solution as to why, when or how such a thing took place, except by pointing out it is extremely unlikely that evolution could have preserved junk code that makes humans enter into imaginary realms.

There was a lot I didn’t expect from this book; the fairy folklore/alien abductee connections had me fascinated. And as someone who’s experienced these mystical states, felt the presence of higher beings and had alien abduction experiences (which I had convinced myself were purely psychological and had absolutely no foundation in “reality”), Supernatural definitely had my attention. There does seem to be a common experience that has been recorded in various human epochs with enough detail to make coincidence unlikely; and as Graham points out, this alone is a fascinating, even incredible feature of human existence.