When I first heard about Richard Dawkins’ “out” campaign I thought it was a joke. Dawkins and others secular leaders are encouraging atheists to “reveal” themselves and “come out” to their families and neighbors.  “Atheism is the new gay” I thought, without fully understanding all that this implied.

More recently I had the opportunity to experience anti-ungodly prejudice first hand when I was applying for an English teaching position at a private university in Taiwan. It was not a religious university, and literary theory has come to embrace notable and outspoken Atheists thinkers like Alan Badiou and Zizek (not to mention the fact that 90% of the Western Literary canon is heretical or blasphemous), so I thought it would be safe for me to “be myself”. I gave them a copy of the book I published recently “Jesus Potter Harry Christ” under the publishing imprint “Holy Blasphemy.”

I prepared dutifully for the interview and was ready to talk about my literary research (how Satan is the hero of Paradise Lost, among other things); I knew the background, history, motto and chief aims of the department; and I’d even googled the competition to see what their qualifications were. As the only PHD level applicant, I thought I stood a pretty fair chance.

I was unprepared, however, to spend the time defending myself from vague and unclear bias and barbs. On the six person board of interviewers, one woman was particularly outspoken. I pegged her early on as a fundamentalist Christian – of which Taiwan has many (although less than 3 percent of Taiwanese are Christians, that percentage goes way up in English literature departments). All of her questions seemed like cynical, jaded attacks. While I could answer her questions, I wasn’t prepared to dig through to the real problem. Rather than “Why should we hire you?” she asked me “Why should we hire you even though the other applicants have way more experience, better teaching skills, have spent more time in Taiwan and can speak better Chinese?” When put that way I found it very difficult to answer. Why indeed?

She picked up my book and scoffed “Holy Blasphemy? Did you move to Taiwan so that you could attack religion and Christianity freely without social repercussions?” “Well…. Yes.” I said. She looked like she’d won a small victory.

I’m probably blowing some of this out of proportion based on faulty memory; but the meeting was negatively charged and drained me emotionally even though a lot of the action was going on under the words.

I wanted to ask her “What are you so angry about? Why am I even at this interview if you’ve clearly decided not to hire me? Why are my personal beliefs/lack of beliefs an issue?”

I felt like I was being judged and discarded based on religious preferences. I felt like she was assuming I was a bad, immoral person. It had nothing to do with my research or teaching ability, but on her need to defend her work space from “someone like me.” (I don’t even consider myself an atheist – but I was being judged as one anyway, because I don’t believe Jesus was the magical son of God and allow myself to say so). 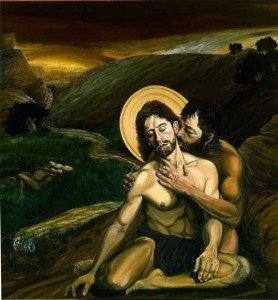 The funny thing is, 30 or 40 years ago a gay person applying for  a university job may have felt the same way. Since then, gay and queer studies became hot topics – the current professors in English Literature departments around the world build their careers on gay and queer studies; it has become, not only respected, but privileged. I would guess that roughly 25% of the faculty of literature departments in Taiwan is either Gay or Christian, and often both.

This is despite the fact that, as I mentioned, most of the Western Canon of great books and authors are disctinctly and sometimes overtly anti-Christian. I’d like to say the world is changing, but in fact it isn’t. Prejudice against atheists is still very strong. Campaigns are being run on a ridiculously low level of public education just to teach people that atheists aren’t sadistic, child-eating monsters.

This recent article in the washington post demonstrates that atheists are viewed as sub-citizens in the US. The following video is an attempt to show how many famous, smart and good people were atheists.

I’d like to believe that someday people who don’t believe in supernatural intervention or divine benevolence won’t need a special title or name, but will just be regarded as normal people; but this is impossible as long as religious people exist in the majority. For atheism to become accepted as normative behavior, without its current negative connotations, we need a system of heavy evangelism, which includes education, ridicule and opposition on a grand scale.

At same same time, what if “atheism” is just the “smart people’s religion”? Can all people get through their lives without the crutch of religion to keep them happy? Maybe not. Many great rulers and political thinkers (Plato, Machiavelli, Nietzsche) saw the need for the public to be given religion – but a religion designed by the ruling class. Maybe what we need is simply a classed society, with atheists ruling from above and creating gods for those below.