The interviewer points out that “Jesus Christ” may have referred to any communities’ version/chosen representative claiming the title of Christ (there were dozens), but Ehrman rebuts by arguing for one, specific historical personality which was then recorded differently by the various gospel writers – who each present unique versions of the literary character. This is to be expected – as perhaps a handful of Obama biographers may paint a different narrative of the life of our current president.

Listen to the interview….

“You need to consider historical evidence, and to say that historical evidence doesn’t count, I mean, why not just deny the Holocaust. Why not deny that Abraham Lincoln existed. You have to look at the evidence… There is very hard evidence. For example, we have the letters of Paul – Paul knew Jesus’ family and relatives and made “off the cuff comments” about “James the brother of the Lord.” As a historian, there is no doubt that Paul wrote Galatians… This is what I do for a living, I’ve been doing this for 30 years, everybody who’s looked at this thing seriously, there’s nobody who doubts this. Name ONE New Testament scholar who doubts that Paul wrote Galatians.” 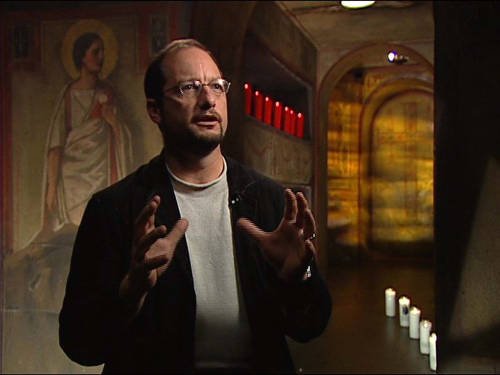 Ehrman’s hard evidence is this: Paul met with James. James is the “brother of the Lord.” THEREFORE Jesus existed.

Focusing on whether of not Jesus existed is entirely the wrong question because, as we’ve seen, the impenetrable army of New Testament Scholars will destroy anybody who claims that he doesn’t (much like focusing on the question of whether God exists clouds much more important issues of social justice and ethics, for example). There is no evidence that Jesus didn’t exist, and a lack of evidence in the historical Jesus cannot prove he didn’t exist. I’ll have to concede with Bart that, taking biblical evidence, there is no indication that there was not a historical Jesus.

HOWEVER – when viewing the literature/story of Jesus Christ as written in the gospels, complete with supernatural events and claims, the Bible overlaps with previous literary traditions to such a degree that it is impossible for any of those claims/stories to have begun with a historical Jesus Christ. So what Bart is saying (and what, if pushed to “follow the evidence” as he himself mandates, he would have to agree to) is that there was a historical figure of Jesus but all of the fantastical elements of the story that are prefigured by earlier literary traditions did not originate with him. So the “historical Jesus” of Ehrman and New Testament scholars was not born of a virgin, did not say most of the things ascribed to him (at least not all the stuff that is so familiar to Philo, Stoicism, the Essenes or the Pharisees), was not the “Logos/Son of God”, and did not resurrect.

For me, what is profoundly important is to show that the New Testament descriptions of Jesus Christ are literature based on compound mythology, resulting in the final claim (which is NOT revolutionary but rather was the decision of nearly a century of Bible scholars in the early days of historical criticism) that the Jesus of History is virtually unknowable and the Jesus of the gospels is mythology.

Yet Bart Ehrman is very, very careful to continue preaching that Jesus was historical (even while publishing books that undermine Christianity). Interestingly, in the interview Robert M. Price comes up – he’s a Biblical/New Testament scholar who has publicly argued in favor of a mythical Christ, and Ehrman is adamant, totally assured, that Price doesn’t currently hold a teaching position (this is unfortunately a vicious circle: As Ehrman has pointed out, ALL New Testament scholars unanimously agree that Jesus existed – those, like Price – who dare to disagree, cannot possibly hope to find a teaching position anywhere; leading to the continuation and preservation of a body of biblical scholars who unanimously agree that Jesus was historical).

Meanwhile, Christians use Ehrman and the other New Testament scholars’ assertion in the historical Jesus to bolster their faith, when neither Ehrman, any biblical scholar, nor any Christian apologist can explain the deeply troubling parallels between Christian literature and pagan mythology. (Christians argue that it doesn’t exist or it is natural that “Pagan-Christs” prefigured the Real Truth; while biblical scholars say “well sure all that stuff was taken from pagan mythology, but that all came later, it has nothing to do with the real Jesus.”)

But what if it didn’t come later? It can be proven, citing biblical passages, that the physical body of Jesus Christ was doubted even before Paul, in the very earliest days of Christianity; groups were already claiming Jesus did not come in the flesh, but in some kind of spiritual body.

Is the existence of a Jesus Christ with only a non-physical, ghostly body the same as the one Ehrman believes in? Is there any way at all to account for these early Christian groups who denied that Jesus came in the flesh?

Ehrman keeps pointing out “the evidence”; but is the small amount of evidence leading us to a historical Jesus enough to counteract the massive amounts of evidence that seem to question whether Jesus actually lived, breathed, ate, died or resurrected (rather than merely “in semblance”)?

At the very least, I find it to be an extremely fascinating and worthwhile question. Unfortunately, very few researchers are interested in that question, and we are immediately rebuked/dismissed by Ehrman and his cronies because we are not “Serious New Testament Scholars” (my PhD is merely in comparative literature/ancient Greek, so obviously I don’t know what I’m talking about).

PS) Ehrman is an excellent researcher and his books are well worth reading; although I was a little disappointed by some of the rhetoric/logical gaps in this interview, as well as his out of hand dismissal of the larger issues at question (which, to be fair, were the interviewer’s responsibility), I appreciate and enjoy most of Ehrman’s work.