“Penn Jillette is a twenty-first-century Lord of Misrule: big, boisterously anarchic, funny, Rabelaisian, impossible and unique. There isn’t–couldn’t be–better not be–anybody like him.”  —RICHARD DAWKINS, bestselling author of The Greatest Show on Earth and The God Delusion

So begins the hype over Penn Jillette’s new book “God, no! Signs You May Already Be an Atheist and Other Magical Tales.” I just saw Penn on a TV interview and the kindle version of his book will be delivered tomorrow, when it becomes available. What I’m afraid of is that “God, no!” will be mostly about the everyday existence of being an atheist – which Penn says is defined by “not knowing” the answers to Life’s Big Questions like “why are we here” or “is there a God” (I would call this agnostic… but to each his own). Hopefully it will have some funny stories, but in Penn’s words it’s more about showing that an atheist can be good – for example that they can love and raise children well – rather than dealing with philosophy, rational arguments or historical criticisms of religion. The main selling point of the book so far is Jillette’s own infamy and personal history, as well as his close relationships to Red Carpet Atheists like Richard Dawkins, Sam Harris, and Christopher Hitchens. 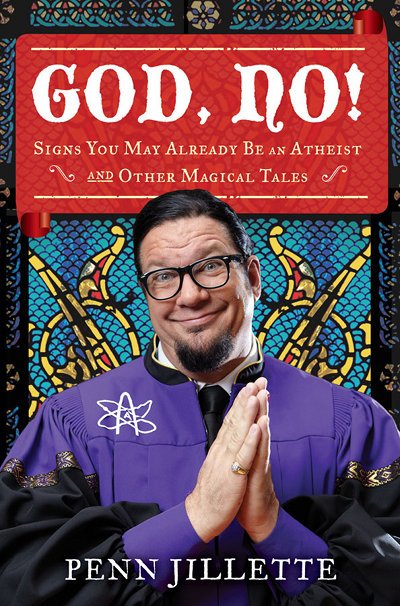