Every year or so, I get obsessed about my jewelry. It’s silly, but mostly harmless, so I allow myself to obsess.
You see I like to believe that wearing gemstones can influence our lives.

You may think I’m an idiot, but first let me me explain.

I’m well aware of placebo effect, and it’s very possible that I and everybody else interested in vedic astrology (or Eastern astrology, which unlike western astrology, provides “remedies” to counteract planetary effects) is just fooling themselves. They think they feel better or more successful than usual, but it’s not really true.

Here’s my response: I never know what a stone is going to do for me. I’ll go into a market, pick up and hold the stones, and see if I feel anything. I’m not a psychic or warlock or anything like that, but often I can feel something, usually in my throat, heart or stomach. Sometimes I don’t feel anything. Sometimes I feel like I’m moving forward or backwards.

Often I feel lightheaded. This is something that happens reliably with stones, but with almost nothing else that I touch.

Many, many times, I’ll buy something that I think should be good for me, but it makes me so uncomfortable I can’t wear it. Most of the time, in fact.

It’s not that I have some mystical faith in the power of gemstones, or a zealous belief in astrology.

I’m just trying to make sense of my own experiences.

Things I’ve bought but given up on: a garnet ring, a cat’s eye ring, lots of Tiger’s Eye, Lapis and Onyx (those should all be excellent for me as a Capricorn, but they aren’t).

The only thing I can consistently wear, has been diamonds, a big yellow zircon, and a pink sapphire. 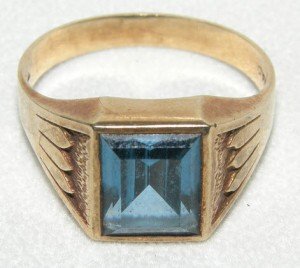 This is the bad-ass ring I want to buy…maybe the research is just to convince myself it might have some functional purpose.

The science behind it

I think you’d be surprised to learn just how much science is behind gemstone therapy. In brief, light vibrates at different levels. The colors that we see differ from white light because they vibrate differently. Likewise, gemstones give off a measurable, orderly radiation. They have the hardest, densest and most organized atomic structure out of almost anything in nature. They are used to guide airplanes, power watches, make medical laserbeams, and much more.

I know it sounds like I’m talking about Atlantis, but the truth is that modern technology acknowledges the power of gemstones.

But which gemstone should I wear?

Personally I don’t believe wearing a gemstone can make miracles happen in my life. Mostly I see them as a good luck charm, or a reward to myself when things are going well.

The idea behind them, however, is that they can ward off malefic planetary influences, or strengthen positive ones.

But astrology is complicated. There are lots of different types. Am I even a Capricorn, or not – different systems put my birthday in different star signs.

Admittedly, I’ve only been buying cheap jewelry, usually under $100. I’m not ready to splurge on an expensive ring, although I’m working up to it.

Is it all clever marketing?

I realize how easy it is to hope that a ring can make you smarter, healthier, and richer – especially when you’re too lazy to eat healthy, exercise, work hard or save money. I realize that buying an expensive gemstone could be a stupid thing to do; a very expensive losing lottery ticket. It’s barely functional. Although it will hold a lot of its value through time (in a way that say, a television won’t), it still seems impractical

They divide everyone up into 12 groups, now they can market to us specifically. They know Capricorns worry too much and want to make more money. So they say, “You should buy this gemstone: it relieves worries and makes money come into your life easily.” To a Virgo, who’s very cerebral, they offer a stone that will make them learn and think faster, and communicate more eloquently.

Sure it’s true that many of the benefits would appeal to everyone: but not all. To the Cancer, who loves family and especially her mother, they say “negative planetary influences may cause injury to your mother: this stone will protect her!”

It’s insane. But then, if it was just marketing, it wouldn’t work as well. They are marketing on the assumption of astrological basis. 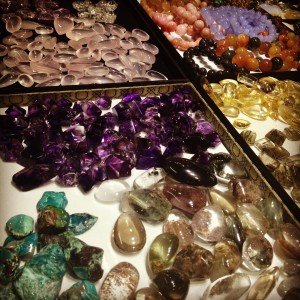 In Asian countries like Taiwan (the above pictures are from the Jade Market I went to this morning) all of this is taken for granted. Even though they use a totally different astrological system, the basics are the same. Green stones like Jade help intelligence. Pink stones are for soothing emotions, and feeling love. Red stones are for self-assertions and passion. And they didn’t borrow these ideas recently from New Age spirituality – actually it went in reverse: the New Age movement is a result of Eastern ideals permeating the West.

Can you avoid your fate or destiny?

But today I learned something entirely new, that I hadn’t really thought about before. I found this video by Kapiel Raaj, who says gemstones are all bullshit.

Not because they don’t work – but because you’re trying to go against the natural order of things.

The planets, your birth, your personality, the challenges and frustrations of your life, all of that is exactly what it’s supposed to be. We’re playing the long game. It’s been going on for billions of years. You have lessons you need to learn on a Karmic Level, and you can’t avoid them. Whatever you are supposed to face, you’re going to face it.

Trying to “outsmart” the natural spiritual order of the universe, trying to fight against a billion years of cosmic evolution, with a little tiny gemstone, is ridiculous (says Kapiel).

That’s fascinating to me. I’m not sure if I disagree with him. Except to say that I believe I have the right, and the ability to improve my life, universe be damned. It may be foolish, but I’m going to keep doing it. If I suffer, or have health or financial problems, I’m going to try and fix them. I’m not going to “accept” what happens to me (it may be the Christian thing to do, turn the other cheek and all that, but I’m not Christian).

Take a minute and watch the video.

A final word on pharmaceuticals vs. gemstones

Did you know a long time ago people used to eat gemstones, or crush them up and drink them? Some still do today. I bring it up because, apart from gemstones, another hobby of mine is brain enhancing drugs.

I’ve always had a bit of depression and anxiety – those got worse in my 20’s and mixed with some devastating migraine attacks, which eventually destroyed my stomach so I could barely eat anything. My stomach serotonin production was always freaking out. Luckily I finally found a fix; Amitriptyline, a tri-cyclic antidepressant given in very small doses to prevent migraines.

It was a miracle when it fixed just about all my health problems. It’s amazing that such a tiny amount of medicine, about 10mg (1/50th of an aspirin) can revolutionize my life.

It has also cleared up a lot of the anxiety, worry, social phobias, and other psychological problems in my life.

Am I “avoiding my fate”? Is the pill changing the experience I was supposed to be having here on earth? Will I have to face it in the next life?

Whatever you think about gemstones and astrology, the overall implications for discussion are well worth diving into:

How much free will do we have? Can pills, gemstones or anything else change or thinking or personalities? Should we seek a happier life, or accept what life brings us?