Daniel Radcliffe seemed to take it in stride last week when he found out he was not invited to the Royal Wedding of Prince William and Kate Middleton. “I mean, I don’t even know them,” he told reporters, “Everyone thinks because we’re rich and we have posh English accents that we must, like, hang out all the time. I’m happy for them, but I’m not that interested in the wedding.”

Apparently however, the social snub hurt Radcliffe more deeply than he let on. At about 3:45 in the afternoon, just as the Royal Couple were completing their vows, guests witnessed Radcliffe, dressed as the main figure of the Harry Potter series by J.K. Rowling, stumbling through the grounds of Westminster Abbey holding a bottle of white chardonnay.

“I was so excited!” said Christine Middleton, 14, the daughter of one of the affair’s exclusive guests, “I was like, ‘look mum, it’s Harry Potter!’ But then he started waving his wand around and shouting at everybody, it was a little scary.”

A security camera video – which has now been posted on YouTube and watched over 9million times – shows Radcliffe knocking over a pyramid of champaign glasses, karate-chopping the wedding cake, and shouting “Crucio!” while pointing a stick at guests. 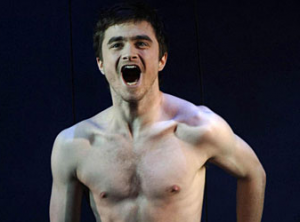 Then he stripped naked and began shouting “Don’t you know who I am?! I am the Chosen One! I’m The-Boy-Who-Fucking-Lived!” before being tackled by security and removed from the premises.

When asked to comment, Emma Watson – who plays Hermoine Granger in the Harry Potter series, said “Well we knew he’s been under a lot of pressure, with the last film coming out and his Broadway debut and all, but I didn’t think he’d – I mean we all thought he would get through it alright.”

The last Harry Potter film, based on the series by J. K. Rowling, Harry Potter and the Deathly Hallows, Part 2 comes out on July 15, 2011.

This is a fictional article! It’s just for fun. Take it easy.