As a theology major with his own plans to write bible-based apocalyptic fiction, I was excited to see a new TV show out with some great actors.

On the one hand, the same topics are recycled so blatantly from other sources it’s cliche on cliche…

-An attractive red haired archaeologist (also American of course) on a dig under the Temple Mount looking for the Ark of the Covenant. 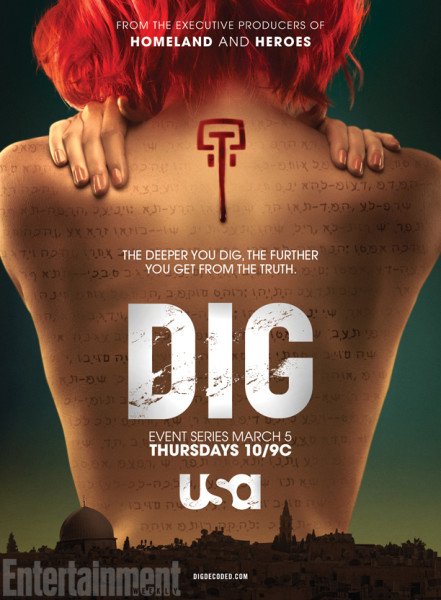 She reminds him of the daughter he just lost (troubled hero with baggage) but then she is murdered – committing him to the case and establishing his personal motivation for going further than his job demands or allows.

At the same time:

-A red heifer tells the Jews the prophecy has begun.

-A strange Christian cult (maybe satanic?) has been raising a young boy to embrace his destiny… but he escapes. They chase him in black SUVs. But he’s a clone. Just one of several… when they catch him, a woman tells him “Your feet have touched he ground; they’re soiled” and then shoots him in the head.

-The Israeli cop steals the evidence, the high priest’s chestplate used to communicate to Yahweh, to bring to his uncle. (The chestplate of the twelve tribes of Israel, that had the 12 stones in it… I forget where it’s mentioned in the OT).

The stones are missing, but the girl with red hair snuck one in hero detective’s pocket before she died; it is recovered by the guy who stole the breastplate during a convey ambush.

It’s a strong pilot episode, it’s sure to appeal to anybody who likes the genre. It’s even more exciting to see it after 2012, when everybody thought all this shit would go down, proving that the expectation of the apocalypse is timeless and always just arriving.

Now we have a powerful artifact that can only be operated once the 12 missing stones are retrieved… so what follows will be a race to the treasure, with gemstones worth killing for, lots of action and fighting, developments as each group with their own agendas focuses on their goals and tries to collect the gemstones to use the breastplate, to either save the world or end it.

That’s a great motif for dramatic fiction that you’ve seen used again and again (in Harry Potter, he needs to collect the 7 Horcruxes).

However there some specific problems with this story:

Mainly, that GOD wants the world to end in apocalypse. It’s HIS plan. So if you’re a believer and you try to end the world, you should be good… but instead, what usually happens is the people who are trying to end the world are branded as “Evil” – maybe “Satanists”, and the hero needs to save the world from destruction. Except, that should make the hero of the story God’s nemesis. The Antichrist would be a normal guy trying not to let God kill off the human race, for good purposes, but if God has the moral upper hand, then the hero of the story must be the bad guy.

Do you want the world to end? No? Then you’re evil.

But since this is probably a more secular version of these events, and since it’s probably aimed at mainstream viewers rather than Christian fundamentalists, I’m willing to bet the “hero” detective will foil some Satanistic plans to end the world, and it will be casually omitted that Satanists have absolutely no motivation to speed up the apocalypse, and with it, judgment day.

Satanists would try and stop God from destroying the world (which is why they have so much in common with “Humanists”). Basically, if God is going to come and destroy the world and wipe out humanity, like he did with the flood, do you support him in that cause and throw away your own life and the lives of your loved ones eagerly?

Or would you stand up and fight back against that crazy nonsense?