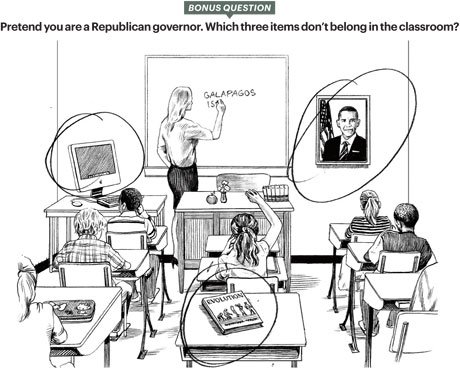 I found this cute political cartoon on esquire for the an article about education budget cuts, Harry Potter and the Deathly Hallows, and Jesus. The author (Stephen Marche) claimed, in essence, that we spend more on the fantasy teachers of Hogwarts than we do for real teachers for our actual children – and that this is not a good idea.

But it’s interesting that the people who are in favor of the budget cuts are probably themselves not very interested in education at all (duh). Look again at the picture – which things would Republicans choose to remove? The Obama picture, the computer, and the book on Evolution. In other words, the people who don’t think teachers need resources like computers probably also don’t think they need resources like Scientific Textbooks. They most likely treat science with scorn and fear, and think that all education needs to do is crank out God-fearing, simple minded workers who will use Biblical Maxims to keep themselves content in their poverty, servitude and powerlessness.

Kids who are educated this way will be more likely to be distracted by the media and entertainment (look – shiny new ipads to watch Hangover 3 on!), keep themselves in debt and spending all of their earnings to support a) corporations and b) pharmaceutical companies. And who the fuck cares anyway, because Jesus is coming back soon so education is totally a waste of time.

Although I’m taking the piss, I’m truthfully not that far off; Republican governors in New Jersey and Wisconsin are forcing decreases in the benefits and pay of teachers at the exact moment when the changing nature of the economy has rendered it nearly impossible for anyone without an education to enter the middle class [source].

The question basically boils down to, does education belong in the classroom – that is, should we teach our children to believe in new, updated things, so that their minds grow and develop; or should we stick with what we knew 1,000 years ago and cram that stuff in instead?
Read more: http://www.esquire.com/features/thousand-words-on-culture/harry-potter-teachers-0611#ixzz1P9X5ENZu