First of all, let me start off by saying that the tragedies recently befalling Japan are horrific and terrible. Any and every human being should look at that sudden and powerful series of disasters and feel the depth of mortality and the unpredictability of life. I genuinely hope and wish that everyone in Japan and those with family or friends in Japan have their burdens eased in any way possible, and send them my love and blessings.

At the same time I admit I feel irked or challenged when I see and hear the many “Pray for Japan” campaigns around the world. The very idea that God intercedes in human affairs, and that with enough prayer (like a popular vote system) God will (like a democratically elected official) do what the majority wishes of him, has some difficult and troublesome conclusions. At the very least, we are assuming that God can help the Japanese in some way. So let’s start with that. What can God do for Japan? Well, he could fix everything. Put the cars and houses back together, raise the people from the dead, restore the nucleur power plant… but he isn’t going to. He could stop the leak of nuclear radiation (by putting a big force field around the plant or something) but he won’t do that, either. So what do people mean when they pray for Japan? Mostly, they mean that they hope God will bring comfort and peace to the people whose lives have been destroyed.

This is condescending on two counts. One: it’s like telling a girl who’s been raped to move on, find peace, learn to forget. Not be angry, not seek justice. Two: most people in Japan are Buddhist or Shinto. They don’t believe in the patriarchal Western God. Praying to “your” god to go and help “those” people, is like saying “here, since your gods are all make-believe, I’ll let you borrow mine for awhile.” On the other hand – it’s the thought that counts, and if you mean “pray” as in “wish and hope for nice things” for them, I don’t think there’s anything wrong with it.

A difficult question raised by this line of thinking, however, is “Why didn’t God stop the destruction in the first place?” If you pray to God after something terrible happens, you assume that – had he wanted to – God could have stopped all of this from happening. Why didn’t he? Where was God? Does God ONLY respond to prayer? Nobody asked God NOT to let Japan be ravaged by earthquake, flooding and nuclear waste, so he didn’t try and stop it? Does God ever try to stop terrible natural disasters from happening? My vote is ‘no’. But perhaps that earthquake and tsunami was supposed to hit San Francisco and LA. Maybe God didn’t want to hurt America so he detoured the destruction to a less-deistic country. Is that the kind of God you want? Natural disasters, and nucleur power plant failures are not God’s fault… but if He knows they’re coming, and he has the power, isn’t it his responsibiliy to do something? Presumably it would have been rather easy for him to at least warn some of his followers first (he didn’t). What exactly then, is the point of God, if he doesn’t protect you from absolute destitution and ruin? How many of those Japanese went to the temples every week, every day of their lives, to pray for personal benedictions. Did the water leave their houses alone (as they did for the Jews in Egypt during the plague of the first-borns)? Again, I would argue that the value of God is that he provides comfort… no tangible physical benefit, no perceivable elevation in living circumstances… but when the shit hits the fan and you’ve got nothing left, he offers consolation and the promise of future rewards. And I’m not saying that this is useless – actually this use of the idea of God is probably essential. How else are we to face personal tragedies, without finding a way to focus on future hopes and the belief that somehow, somewhere, someone is watching and eventually justice will be done.

But there’s a further danger: by believing that God has the power to help the Japanese, you open the door to the idea that God deliberately “attacked” Japan. This idea is usually along the lines of either a) God was punishing Japan for the sins of modern culture and society or b) God was testing Japan’s faith, as he did with Job, and will later reward them with bountiful blessings. In either case, the idea of praying to God after the fact is tantamount to saying “God you must have had good reasons to do what you did, and now that you’ve brought them low, help them find the strength to get up and believe in you.” Or – after a tyrant has slaughtered a rebellion, for those oppressed peoples to bow down before the tyrant’s strength and power.

Anyway, these merely interesting theological ideas are of course meaningless to those suffering. I urge everyone, regardless of your beliefs, to feel compassion and do whatever you can to help. 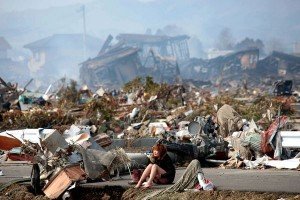 5 Ways to Donate to Japan Quake and Tsunami Relief

1. PayPal – A leader in transferring funds, PayPal offers a link on their front page which will transfer you directly to a page allowing you to make an immediate $25 donation to four big charities including American Red Cross with the click of a button. Or, there is a drop-down for donations to other charities. Whichever you choose, PayPal will cover all the processing costs so that 100 percent of your money will get to the charity of your choice and start helping out.

2. iTunes – Through the iTunes store, you can donate $5 to $200 to the American Red Cross. To pledge your support, just click the “donate” button beneath the amount you want to give, and Apple will charge the credit card attached to your iTunes account as an iTunes transaction and then deliver all the money over to them. ”Your support will enable the Red Cross to provide, shelter, food, emotional support and other assistance to victims of all disasters,” the iTunes page says.

3. Texting – On the back of the success of texting in money during the days of Haiti’s awful tragedy, a similar service has been set up for Japan. Text “REDCROSS” to 90999 to donate $10 to the American Red Cross. Text “QUAKE” or “JAPAN” to 80888 to make a $10 donation to the Salvation Army’s Japan quake relief efforts. Text “JAPAN” or “TSUNAMI” to 20222 to donate $10 to Save the Children. Make sure you respond “YES” when they send you a thank you message. Your donation will be on your monthly wireless bill, and most carriers will allow you to donate up to three times per month.

4. Facebook Causes – This donation will go to American National Red Cross as well through Network for Good, a nonprofit donor-advised fund. You can donate $10 or more by visiting the Facebook Causes page.

5. World Vision – If you do not want to send your money to the American Red Cross, World Vision is one of many organizations that are assisting in the relief. In the wake of a disaster, World Vision is an early responder, immediately distributing pre-positioned emergency supplies and sending highly-trained staff to assess and respond to the most urgent needs. You can donate as much as you would like through their website with a minimum of $10.