I’m watching Defiance, Episode 2 – a new SyFy channel production about a post-apocalyptic earth city filled with mixed alien races. One of the aliens communities is torturing one of its own for cowardice in battle. The new sheriff, a typical blonde American cowboy, stops the ceremony at gunpoint. 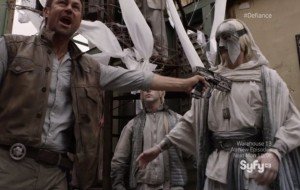 The alien in question begs to let them finish his torture, which is necessarily to clean him of sins so that his soul will reach absolution, and also to redeem his family. It’s a not-so-foreign religious idealism which believes pain is purgative. But the cowboy won’t listen – until the mayor weighs in and allows them to continue their rite.

“Can you honestly tell me that what you think they are doing is RIGHT?” he whines.

“No, but it is NECESSARILY” she replies.

Which side are you on?

At first I was pissed at the sheriff for sticking his nose into the private affairs of a foreign culture and passing judgment on their religious traditions. What if, for example, a foreign lawmaker walked into your daughter’s first communion.

“You’re FORCING her to drink the blood of 2000 year old man! That’s barbaric!”

“But please sir, I need to do this, drinking the blood will wash away my sins!”

Do you let her continue in what you perceive as a sick and twisted form of psychological abuse based on infantile superstition? If so, who are you to decide what’s RIGHT?

Or, do you just let them go ahead with their traditions?

(In a more severe case, think of female genital mutilation, or even circumcision which has become standard in the west).

Amnesty International and other Organizations are against ALL forms of torture, no matter what, and most civilized citizens are as well – on principle. Torture is bad.

But what about the long favored church tradition of penitence? We may have gotten rid of the whips and chains, but many Christians still believe in sacrifice, such as giving up chocolate or coffee for lent.

Surely the principle is still sound, if not the macabre.

Most Christians will also affirm that there is glory in martyrdom – that dying for the cause is the highest virtue. What if the Romans had said to themselves, let’s just lock these rebels up in a state prison for the rest of their lives, instead of feeding them to the lions. There’s no glory in imprisonment. Wouldn’t the martyrs have demanded more bloodshed, so that they could reap the celestial rewards?

The action in Defiance builds when the red-head alien chick climbs up on the crucifix and cuts him down – hissing and spitting while the other race is throwing rocks at her. She is protected by the black kid deputy who likes her.

She seems like a spoiled first world brat heading off to Iran and denouncing their traditions as barbaric. Stupid, sure. But is she right?

Is it time for the world to say, we just won’t tolerate this shit anymore, religious tolerance be damned?

What do you think

Is there any governmental branch that can challenge what we believe in? Should there be? 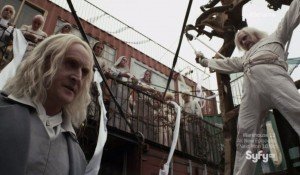