As a theology student/ex-Christian I’m practically required to watch movies about exorcisms, God, Satan, and Christianity. And usually they suck. So it was refreshing to watch “The Rite” (2011) and be entertained. The Rite is a brilliantly complex movie, with stunning special effects, moments of panic and macabre, and of course, world-class acting (Anthony Hopkins , Colin O’Donoghue , Alice Braga).

That said, there are certain pitfalls.

The plot revolves around an American seminary student, who joined priest-training to get out of his father’s mortician business. Just as he tries to quit the church, one of his teachers blackmails him into giving it one last shot – by traveling to Italy for a two month exorcism course. 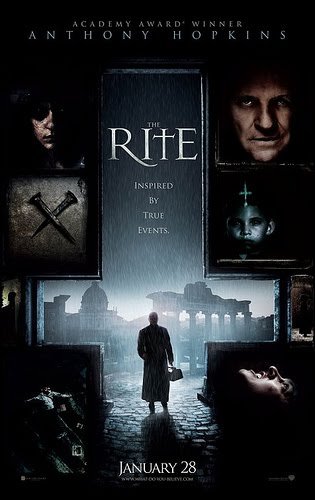 One of the most refreshing things about “The Rite” is that the protagonist, Michael Kovak, is a hardened skeptic, with witty, courageous one-line rebuttals to the believers around him.

When Father Lucas, the battle-weary experienced exorcist brings out the tired line “The greatest feat the devil ever performed was getting the world to believe he doesn’t exist,” Michael replies, “It gets complicated when no proof of the devil is proof of the devil.”

Michael refuses to believe in Satan after witnessing his first exorcism, when a 16-year old pregnant girl coughs up nails, returns a charm bracelet that he had buried with a corpse back in America, and uses a love endearment from his exgirlfriend. He doesn’t believe when frogs infest his room or when a young boy has teeth marks from a demonic mule with red eyes. He looks instead for more practical causes, such as abusive parents and psychological trauma. He even becomes convinced that Father Lucas is purposely convincing people to go on with their delusions, and says “People will believe anything rather than accept the truth.”

But then his father gets sick. He calls to check on his father at the hospital, and chats with him for awhile before the doctor gets on the phone. Then the doctor tells him his father died 6 hours previously (Holy Shit).

That’s when  he sees the red eyed mule of death. Once his unbelief is broken, he begins to see everything (once you stop letting reason filter reality, you’ll believe in anything). In the movie, the lesson is that the terror is real – and you can only defeat it when you believe in it. Then the demon takes over the body of the old exorcist Father Lucas, and Michael is the only one there to stop it. During round one, he fails and is about to give up. He still doesn’t believe.

His journalist friend Angeline (Alice Braga) tells him, “It’s FATE that led you to this, to here. You’re not alone.” He tries again, gets pushed up against the wall with the possessed priest at his throat, and in the climax of the movie says:

Tadaa! With his new found belief in God, Michaels is able to command the demon to reveal his name, which then allows him to cast it out.

Where the hell is God?

“HE who commands you is he who cast you out of the the high heavens and into hell, so hear me, I who BELIEVE…” What’s wrong with this picture? A believer is fighting tooth and nail against a powerful demon and God is merely represented? Where is GOD? He is up there waiting passively for someone to have enough faith. In other words, God doesn’t care enough to intervene. He doesn’t care who gets hurt, who lives and dies, who believes or not. He leaves that all up to us (and the devil, who is allowed to inflict harm and violence upon us.)

I know the rhetoric about God not wanting to provide proof of His existence so that people can choose to love him freely – but how does that fit in here? Proof of Satan IS proof of God. Imagine what God is thinking right now, watching this priest get choked by his own bastard children (demons), and basically saying “I’d love to help, you know, but that’s against the rules. I don’t want to force you to believe in me… Oh and by the way, if you die right now, not having accepted me and my Son, you’re going to Hell.”

How Stupid is Satan?

For this plot to work out, Satan has to be a complete idiot. What does the devil actually, ever accomplish? He gets skeptics and non-believers to believe in God. Of course once you believe in the Devil, you will worship God. Devil worship is a ridiculous idea.

But who is Satan really working for? If he’s trying to get people to do bad things and disbelieve in God, the best thing he could possibly do is totally disappear. Humans don’t need any temptation, we just need to have the fear of consequence removed. By reintroducing any supernatural experience, Satan is just teaching people that God is real and they better start praying. This is Satan’s role and purpose in the Book of Job – and in fact, how can it be otherwise? If God is omnipotent, all evil that exists must be allowed to exist. The truth is that the devil IS God – being terrible and testing people, so that they will love Him. The conflict with Satan is God’s “War on Terror” that insures His re-election.

Something else that is interesting about the whole “demonic possession” thing is its roots in pre-Christian magic. Michael has to get the name of the demon before it can be controlled.

It is GOD who commands you your name… I know you, I know your name, therefore I can command you.

In the pagan magical tradition and Jewish demonology out of which Christianity sprung, you needed to know the secret, protected name of a god or demon to control it. The true names of the gods were considered to be both powerful and concealed; they were difficult to discover and kept from the public. The Catholic tradition of exorcism by knowing the “true names” of the demons is actually the ancient magical practice of demonology found in pagan mystery cults preceding Christianity.

What good is faith?

At the end of The Rite, we end up with a priest who WITNESSED all of these miraculous, impossible events. It’s false to say that he has faith or he believes. He doesn’t need faith. He has certainty. He’s been allowed to see. If God wanted to save him and turn him into a priest, letting him encounter Satan first-hand was smart manipulation. But what about the rest of us? If God neither steps into our lives himself, nor even lets us witness demons and horrors of hell, why should we believe at all? Is Hollywood’s portrayal of demonic possession enough “evidence” to put the “fear of the lord” into us? Are movies such as “The Rite” God’s last resort to get us to turn to him? And if so, aren’t you a little offended that He can’t do any better?