Kings 1: 25-29: Elijah said to the prophets of Baal, “Choose one bull and prepare it first, for you are the majority; invoke your god by name, but apply no fire.” They took the bull that was given them; they prepared it, and invoked Baal by name from morning until noon, shouting, “O Baal, answer us!” But there was no sound, and none who responded; so they performed a hopping dance about the altar that had been set up. When noon came, Elijah mocked them, saying, “Shout louder! After all, he is a god. But he may be in conversation, he may be detained, or he may be on a journey, or perhaps he is asleep and will wake up.” So they shouted louder, and gashed themselves with knives and spears, according to their practice, until the blood streamed over them. When noon passed, they kept raving until the hour of presenting the meal offering. Still there was no sound, and none who responded or heeded.
33-35: [Elijah] laid out the wood, and he cut up the bull and laid it on the wood. And he said, “Fill four jars with water and pour it over the burnt offering and the wood.” Then he said, “Do it a second time”; and they did it a second time. “Do it a third time,” he said; and they did it a third time. The water ran down around the altar, and even the trench was filled with water.
38-39: Then fire from the LORD descended and consumed the burnt offering, the wood, the stones, and the earth; and it licked up the water that was in the trench. When they saw this, all the people flung themselves on their faces and cried out: “The LORD alone is God, The LORD alone is God!”
40: Then Elijah said to them, “Seize the prophets of Baal, let not a single one of them get away.” They seized them, and Elijah took them down to the Wadi Kishon and slaughtered them there. 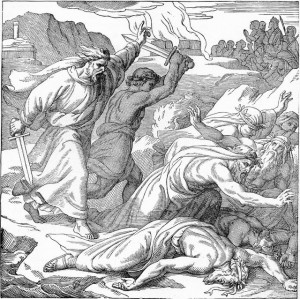 So Elijah, with God’s help, publicly and miraculously proved that Yahweh is real (with a magic trick of lighting wet wood. Maybe he replaced the water with kerosene?). At any rate, the ‘test’ was only a justification for murder; Elijah is pretty much a nutcase.

This picture offends my sense of humanity. In the background there is a burning fort and a bunch of people (I presume Israel, with its king) praying to their God for victory.

In the foreground, a very angry and zealous prophet takes a sword and chops down the prophets of Baal, who flee for their lives, cringing and begging and – in some cases – bleeding to death.

Who are the good guys in this picture? Well, if you’re religious, then Elijah is. Baal, in the Old Testament, is never called a false idol or illusion. Baal is another God, a competitor, who the Israelites turned back to again and again. We don’t know exactly what he offered that Yahweh did not (peace, understanding?) but he was tempting enough to steal Israelites away over and over. Most of the Old Testament prophets like Elijah are witness to the fact that Israel was often and openly worshiping other gods, including Tammuz, Ashtarte, Baal and others.

Elijah, being the most holy and most loyal, simply did what any conservative religious person of faith would do when threatened with extinction in the face of other, more popular religous movements: kill all trespassers. Israel was being punished by God because Israelites were worshipping Baal. Solution? Kill the priests of Baal. Burn their temples, destroy (or steal and put in Christian churches) their artifacts. This pattern is repeated throughout the history of the Jews and the Christians, who often did the same thing to Pagan counterparts. But look at the picture more closely – who is holding the sword? Who is angry? Who is wearing laurel wreaths, symbols of peace? Who, in other words, has the real ethical upper-hand?

I’ve said it before and I’ll stress it here, religious tolerance is impossible for the religious mind. If there is only Truth and Falsity, and if God exists, then the eventual, universal acceptance of the Truth is mandatory and inescapable. Whether we help God along by destroying His enemies, slowly convert them to The True faith, or simply let them die out as Other, we cannot afford to let them gain enough power to become serious rivals. And if they do gain enough power to take away supporters of our faith, then tolerance is no longer an option. Take up weapons (of conflict, speech, protest, or whatever) and fight for survival!