Jack the Giant Killer, a re-telling of European myth and folklore, starring Nicholas Hoult, Stanley Tucci and Ewan McGregor, is coming out summer 2012! Although you probably know the story by heart, I’ll bet you didn’t know it’s biblical roots. Read on to learn where the story really comes from!

History of Jack and the Beanstalk:

The earliest printed edition which has survived is the 1807 book The History of Jack and the Bean Stalk, printed by Benjamin Tabart, although the story was already in existence sometime before this, as a burlesque of the story entitled The Story of Jack Spriggins and the Enchanted Bean was included in the 1734 second edition of Round About Our Coal-Fire. But where does the story really come from?

The beanstalk is reminiscent of the ancient Northern European belief in a world tree connecting Earth to heaven. But dig deeper,  and we discover that the biblical tale of Jonah closes rather abruptly with the hero resting under a fast growing gourd, Hebrew קיקיון (qiyqayown), the only time in Scripture so mentioned.

While scholars place the historical events in the 8th century BCE they were not recorded by Hebrew scribes until some centuries later. Aha, now things get really interesting. There is a long standing tradition that, when the Israelites moved from Egypt into their promised land, they did so by displacing the previous inhabitants; including an already vanishing race of extremely large people.

“There were giants in the earth in those days; and also after that, when the sons of God came in unto the daughters of men, and they bare children to them, the same became mighty men which were of old, men of renown.” Genesis 6:4 (KJV)

Over and over in the Bible, the Israelites fret about how they are going to overpower this tall and strong race.

“But the people who live there are powerful, and the cities are fortified and very large. We even saw descendants of Anak there. (29)The Amalekites live in the Negev; the Hittites, Jebusites and Amorites live in the hill country; and the Canaanites live near the sea and along the Jordan.” (30)Then Caleb silenced the people before Moses and said, “We should go up and take possession of the land, for we can certainly do it.” (31)But the men who had gone up with him said, “We can’t attack those people; they are stronger than we are.” (32)And they spread among the Israelites a bad report about the land they had explored. They said, “The land we explored devours those living in it. All the people we saw there are of great size. (33)We saw the Nephilim there (the descendants of Anak come from the Nephilim). We seemed like grasshoppers in our own eyes, and we looked the same to them.” Numbers 13:28-33 (NIV)

“Where can we go? Our brothers have made us lose heart. They say, ‘The people are stronger and taller than we are; the cities are large, with walls up to the sky. We even saw the Anakites there.'” Deuteronomy 1:28 (NIV)

When they wage war and are victorious, they celebrate it.

The story of David and Goliath is known to even casual church goers – one little boy destroys a strong and mighty giant; this may be the inspiration for Jack and the Beanstalk – but who is the real hero? Keep in mind that Goliath was defending his homeland. David and his Israelites were a migrating band of highly territorialistic colonizers/conquerers, creating genocide to destroy all traces of the peoples who were already living in the land they had decided (or God had told them) that was theirs to possess.

David takes Goliath’s sword, and his head, and puts them in Solomon’s Temple.

Fascinatingly, 1 Chronicles 20:6 says the giants have six fingers and toes: “And yet again there was war at Gath, where was a man of great stature, whose fingers and toes were four and twenty [24], six on each hand, and six on each foot: and he also was the son of the giant.”

Several traditions also tell of giants in North America, and some researchers have indicated that they fled the Middle East out of persecution, and resettled in S. and North America. (The red-haired Lost Tribe of Dan; also reported to have moved to Ireland, taking Goliath’s legendary sword with them!)

The Ethics of Jack and the Beanstalk

The story portrays a “hero” unscrupulously hiding in a man’s house, playing on his wife’s sympathies in order to rob and finally murder the owner of the house. In Tabart’s moralized version, a fairy woman explains to Jack that the giant had robbed and killed his father, thus transforming the acts into justified retribution.[10] (Andrew Lang follows this version in the Red Fairy Book of 1890.)

Jacobs dropped the justification on the grounds that it had not been in the version he had heard as a child, and because children knew that robbery and murder were wrong without being told so by a fairy tale.[11]

Many modern interpretations have followed Tabart and painted the giant as a villain, terrorizing smaller folk and often stealing items of value, so that Jack becomes a legitimate protagonist. For example, the 1952 film starring Abbott and Costello blames the giant for Jack’s ill fortunes and impoverishment, as he has been stealing food and wealth from the smaller folk of the lands below his home, including the hen that lays golden eggs, which in this version originally belonged to Jack’s family. In other versions it is implied that the giant had stolen the hen and the harp from Jack’s father. However, Brian Henson’s 2001 TV miniseries Jack and the Beanstalk: The Real Story is an alternative version of the tale which abandons Tabart’s additions and significantly vilifies Jack, due to Henson’s disgust with Jack’s morally questionable actions in the original story.[12]

If the story can really be traced as far back as Israel’s slaughter of the Philistines, can we compare Jack to David? David paid for his bride, the daughter of King Saul, with the foreskins of 200 Philistines he’d killed – a grotesque offering akin to the more modern equivalent of scalping. He later became a thieving, murdering pillager, harassing legitimate rulers in the area, demanding to be paid for not destroying farmlands (but sometimes killing everybody anyway). Eventually he amassed a huge fortune and become the King of both Judah and Israel.

In the original Jack and the Beanstalk story, Jack and his mother are poor – Jack gets the magic beans, goes “upstairs” and breaks into the Giant’s house, and steals the magic golden egg-laying hen. But he wasn’t satisfied:

Next, Jack found out that the ogre also had a magical singing harp:

After breakfast was over, the ogre called out, “Wife, wife, bring me my golden harp.”

So she brought it and put it on the table before him. Then he said, “Sing!” and the golden harp sang most beautifully. And it went on singing till the ogre fell asleep, and commenced to snore like thunder.

And here we find another link to King Saul/David: David’s original successes came from his harp playing and ability to soothe the former King of Israel:

Saul, King of Israel, was troubled by an “evil spirit from the Lord”. Saul was recommended to have David to play on a harp in order that harmony might drive this evil spirit back to the Lord who sent it. The Jews’ harp was played successfully, and Saul was often relieved from the evil spirit by the aid of David. And so David was appointed armor-bearer to the king.

After stealing the harp, Jack runs away, but this time the giant follows him.

Then Jack showed his mother his golden harp, and what with showing that and selling the golden eggs, Jack and his mother became very rich, and he married a great princess, and they lived happy ever after.

In the King David story, David stuns Goliath with a stone, then takes the giant’s own sword and hacks off his head, then later marries the King’s daughter (Princess Michal).

It seems pretty conclusive that Jack and the Beanstalk is based on King David – but the real question we need to ask, is who is the bad guy? If someone breaks into your house and steals your shit, and then kills you when you try to get it back, wouldn’t you hope for a little justice? Even if you are big and ugly? 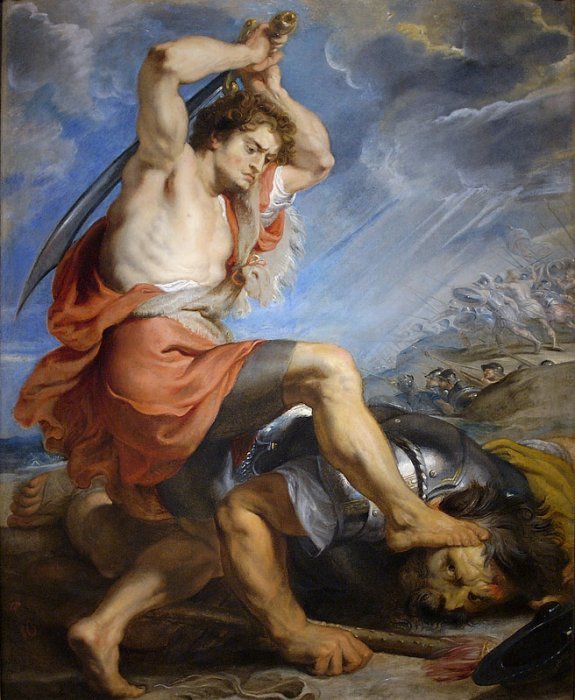