It’s 7:38 in the morning. I stayed up late watching “Jeff Who Lives at Home”, which completely surprised me. It starts of with a douchy character talking about Mel Gibson’s “Signs” movie (Jason Jordan Segel). He’s a 30 year old pot-smoking loser who lives at home and has no job. I thought the film was making fun of him.

The movie begins with his mom demanding he get off the damn couch, pick up some wood glue and fix the broken window blinds. (A huge task for him).

He gets involved in his brother’s messy marriage (his wife is about to cheat on him) and tries to follow “Synchronicities” or little signs of coincidence to know what he’s supposed to do next. If you’re familiar with “The Secret” or any New Age literature, this is pretty common stuff. Remarkably, some of his gut feelings (jumping on a van because the name “Kevin” is on it) actually start working out.

By the end of the movie, after it seems like nothing has happened, he suddenly finds himself at the right place at the right time – he helps a city councilman and his two daughters escape from a sinking car. Then his brother jumps in to save him. He’s a hero, his family is reunited, life has meaning and purpose. Hooray.

Somehow he’s even managed to pick up the wood glue. He fixes the broken piece with a sense of accomplishment. We get the sense he’s grown into a functioning, responsible adult; his worldview is justified.

But what the hell does it mean?

I believe in synchronicity, at least in part. I’ve had some pretty incredible personal experiences of expecting miracles and watching them materialize.

Example: In my teens I got a kick out of spontaneously giving away money and seeing how it would return to me. One night I gave $5 to a waitress at Denney’s and told her it was for free pie for the next customers who came in. Then I went across the street to Blockbuster. I picked out a couple movies. I pulled out my wallet, prepared to pay about $5 for the rentals.

But the clerk told me the cash register was shut. The system was open, so I could check out the movies, but I couldn’t pay for them. He just had to let me take them for free.

If that sounds impossible unlikely to you, it is. It probably shouldn’t have happened.

And the timing of it all was one of those impressively elaborate “coincidences” that pushed me deeper into my budding spirituality.

Is life inherently meaningful, or do we bring the meaning?

The problem is, it doesn’t seem to work for everybody. A lot of people live shit lives. They buy “The Secret” and a bunch of self-help motivational success books, but they never really change themselves or their lives. They just get more shit.

Scenario A: There is a magic man in the sky who is watching everything and pulling all the strings. He’s the one who led Jeff to his ultimate meaningful event. The man in the sky is making choices and trying to do the best thing for everybody. In that hypothesis, he’s also the one who made Jeff’s brother an asshole and his wife a cheating whore. It was all part of the grand plan. 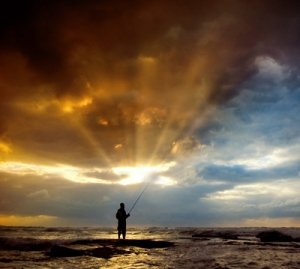 The problem is for everybody who was in the right place at the right time, miraculously, there are hundreds of people who just died in the horrific traffic accident. Whole families. Nobody came and saved them. Was that their destiny? Were they supposed to die that way?

The problem with the “man in the sky” theory is that he has to be culpable, for everything. There’s no way around it. And if you calculate the perfect coincidences that seem so amazing they convert new people to believe in Him, against the stupid, ugly, violent tragedies that happen everyday, he’s not even doing that well. He’s only successful a tiny fraction of the time. The rest of the time, bad things happen.

Scenario B: One the other hand, maybe the universe is an open system with nobody in control. Maybe “magic” are the tools that “God” left behind, or some part of quantum physics that we don’t understand yet. In this case, certain things we do may influence our environment in unexpected but not completely random ways.

It may be possible for us to believe in something, keep saying it to ourselves everyday, and watch it “manifest” in our lives. Our thoughts and words might go out into the universe and make tiny changes that bring our desires to us.

(Leading, however, to the dangerous idea that it only doesn’t work if “it wasn’t supposed to happen” or “you didn’t believe hard enough.”)

Scenario C: Here is what I think is a little more possible:
That the way we think, and what we believe in, alters our behavior.

So if we really believe we’re going to make more money, or get that new job, or save up to buy our dream house, we’ll keep focusing on it and picturing it and dreaming about it… and then we’ll start spontaneously matching up our actions with that expectation.

We’ll start doing the work. Saving the money. We’ll be open to those “synchronicities” that lead us to where we want to go, because that’s where our mindset is. (Like, you may never notice a particular icecream shop, then one day you’re walking by and you want ice cream. And you see it. And you say “wow, I never noticed it before, how lucky that it’s right here, just when I need it).

Few people will disagree with Scenario C, because it’s basically how we make any kind of changes in our lives. It’s basic goal-setting, and everybody knows that setting goals works. No need for miracles, or a man-in-the-sky.

Which belief is more beneficial?

The problem with Scenario C, is that it doesn’t make your life any more meaningful. It can’t answer your existential angst or fear of death. It can’t tell you what to do with your life if you have no goals.

It’s also purely selfish, and it usually boils down to “getting more money” or “getting healthy”.

It can’t help with the serious depression that can come when faced with the absolute void of a universe where nothing you do matters.

Believing in a universe that loves you and wants you to be more successful, a universe that is conspiring in your advantage and secretly helping you out at every turn, is an empowering belief that might actually make it easier to be happy and successful – whether or not it’s true.

Personally, I’m somewhere between B and C. What about you?