On a church billboard near my parents’ house in Oregon I saw this sign:

“People use Duct Tape to fix everything. God used nails.”

I guffawed immediately – but then became sober as its many meanings sank in. God used nails? Ok – maybe if we accept that Jesus Christ had to die in sacrifice for the sins of the world… did it have to be so painful? Was morbid, bleeding, ripping-of-flesh suffering required? Was it the exact measure of pain and torture that was needed to compensate for our sins, perhaps one drop of blood for every 10 billion evil deeds? Or was it his death alone that saved us? (Surely, a more human death could have been provided.) Why did God use crucifixion, rather than, say, a swift blow to the back of the head?

This is my answer: God used nails, in Christian theology, because he wanted you to feel very, very bad. Taking your sins away is meaningless, unless it fills you with crushing amounts of both gratitude and guilt. God wants you to feel the pain that Jesus endured on the cross. Guilt and gratitude are a powerful combination, virtually guaranteed to keep you submissive and humble enough to follow his commands. In fact, if I were trying to invent a religion – a way for everybody to act, a way for them to live, I would first have to give them some overwhelming motivation for listening to me and doing what I tell them to. The agonizing death of Jesus Christ and the moral reminder that he died for you, is one of the most psychologically powerful motivators in religious history.

It is much stronger than the original 10 commandments. It is even stronger than merely the punishments of Hell and the rewards of Heaven. The personal debt owed to Jesus Christ whose blood was shed for you, leaves a heavy burden of ethical obligation upon the believer. As such, it is a very useful belief. However, that doesn’t make it historically accurate at all. In addition, the meaningfulness of Christ’s sacrifice disappears swiftly when examined. Christ has existed from the beginning and his suffering lasted for… a day? How much more do cancer patients or molested children suffer, to give just two examples. Not to mention the fact that Jesus Christ rose from the dead, put his suffering behind him, and ascended into heaven. Hardly a life-changing traumatic experience for Jesus, regardless of the amount of pain he felt.

The triviality of Christ’s sacrifice, in comparison to those tortured in Hell forever as a result of his actions, is well portrayed by one of my favorite artists, Normal Bob Smith. 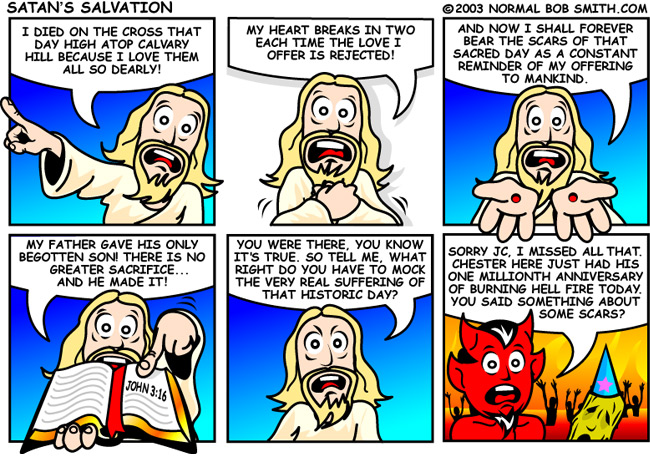 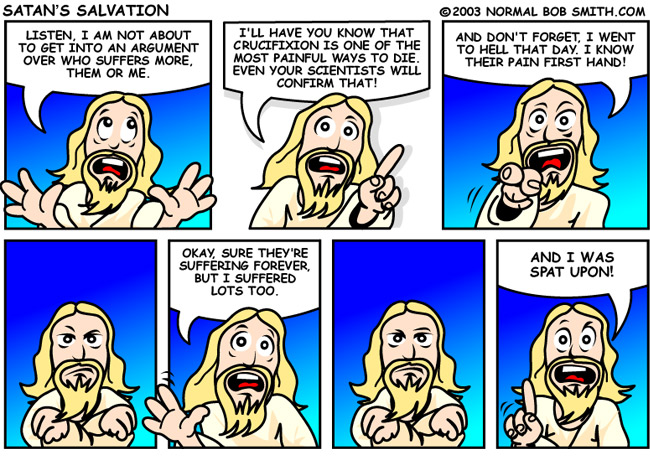