In Taiwan, teacher’s day was last week on September 28th; but “World Teacher’s Day” is on October 5th. In between the two (today, September 30th, 2011) is “Blasphemy Day International.”

A good teacher, like a good blasphemer, is willing to question assumed notions, admit he doesn’t have all the answers, challenge authorities and received knowledge, and teach his students to do the same. 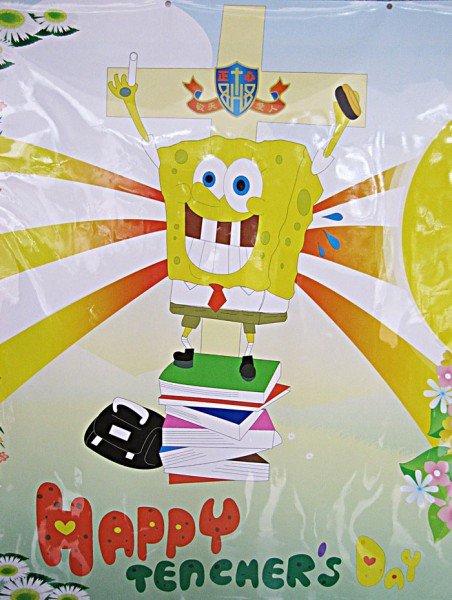 What is Blasphemy Day International?

(From the Facebook page) “Free speech is the foundation on which all other liberties rest. Without having the right to express our opinions, however unpopular, those willing to use political clout, violence, and threats will stifle dissent, and we must all suffer the consequences of this. As George Bernard Shaw quipped, “Every great truth begins as a blasphemy.”

The UN, rather than standing up for free speech, has given in to pressure from Islamic nations and has proposed a resolution to essentially ban criticism of religion. In its pursuit of “tolerance” for religion, this resolution wants to strip everyone, everywhere, of their freedom, even their obligation, to criticize what they oppose. Unlike one’s political affiliation or favorite sports team, religion demands – and has been granted – unique immunity from criticism since its very inception. Labeling anything deemed critical “blasphemy”, religions have effectively defined the boundaries for what can and can’t be said about them. We propose we knock down this barrier and break this spell. Religion is no more undeserving of criticism than anything else, and if people’s insecurities are upheld as a reason to stifle the expression of the equally sincere feelings of others, and indeed, the pursuit of truth itself, we will have forsaken our ideals in favor of one-sided and entirely undeserved sympathy. As Richard Dawkins noted,

“Society bends over backward to be accommodating to religious sensibilities but not to other kinds of sensibilities. If I say something offensive to religious people, I’ll be universally censured, including by many atheists. But if I say something insulting about Democrats or Republicans or the Green Party, one is allowed to get away with that. Hiding behind the smoke screen of untouchability is something religions have been allowed to get away with for too long.”

International Blasphemy Rights Day is a day of protest against this UN Resolution, and against any attempt to stifle free speech. Please join this group. Whatever your beliefs – unless you’re a raging, pro-censorship fundamentalist – the UN resolution, and laws against blasphemy, are an offense to humankind.