Is Kevin Costner an Atheist? This thought crossed my mind a few times while watching the History Channel’s 3 part special “Hatfields and McCoys”.

While based on a historical family feud, a few key themes in the plot and dialogue seemed specifically focused on the relationship between violence and religion. So what exactly does the mini-series have to say about religious belief? Let’s find out.

The crucial break between the two men, who had been friends, comes when Hatfield decides to quit the battlefield and become a deserter during the civil war. The battle lines are drawn between familiar sources of conflict between the religious and irreligious: Hatfield represents freedom, business, progress, expansion. He makes his own rational choices, forges the land with his will power and hard work. He’s the entrepreneur.

McCoy symbolizes duty, devotion to God. He stays to fight the war till the final end, coming home a much changed man. Interestingly, the law is on McCoy’s side – a relative lawyer is stereotypically cast as a sneaky, evil, pasty son of a bitch (who tries to cheat Hatfield out of his property).

Although both families have jerks and idiots who actually cause most of the trouble, the conflict-resolution protocol of both family leaders stems from their respective ideologies. Over and over, Hatfield tries to find a way to make peace, and McCoy refuses him – griping and grumbling and paranoid, and by this time also a drunk. McCoy has “Righteousness” on his side and refuses to compromise.

Finally the feud becomes too great and the Hatfields decide to cut off the head of the snake by going after Randall McCoy; he runs out leaving his family behind, and prays: “Heavenly Father, I beg for you to have mercy and spare my family and smite my family, have mercy Lord Jesus.”

And then? God doesn’t help. His house is burnt down. His daughter and son are shot. This is a realistic, historical story (implies the History Channel) not a Christian story.

Randall McCoy is just like Job dealing with tragedy. “Why God, Why? Why me? Why?!” Playing the weak victim, he imagines an evil conspiracy of demons are after him.

“I seen the devil in the fire, he was laughing at me, he was laughing!” He is the persecuted, the meek. Nothing is his fault, he is totally in the right – but as such, his faith in a just God becomes an irreconcilable point of difference between his experiences. He becomes bitter and angry, feeling that God is ignoring or punishing him.

“I prayed to a merciful God who showed no mercy.”

“This is his will? My children dead, my wife hurt and my house burnt? Where was God? If this is his will, what kind of God is that?”

Now the classic Christian take on suffering is that McCoy is experiencing a crisis of faith, but he’ll pull through it. If he reconfirms his faith in God, everything will be restored to him (maybe like Job, he’ll have new kids to replace the ones he lost).

But this isn’t a Christian parable; it’s a historical miniseries. Are the McCoys going to win – proving that God intercedes in human affairs and helps those who are loyal to him?

No – instead the lesson seems to be that the religious mindset produces a stubborn and intellectually road-blocked mentality which prohibits making intelligent decisions, and instead piles up the walls between one group and its perceived enemies, until the only solution is outright violence.

In the end McCoy is drunk in a bar (I wish there was a study linking alcoholism with Christianity – I’ll bet it would be surprising) while everybody else goes off to fight the war he started.

But he intercepts the party and takes the lead, shouting,

“The Law Be Damned, Hatfields be Damned, God Be Damned!”

He’s eventually become the atheist – but not through free will or rational decision, but due to his inability to handle loss and pain (an inability that was firmly rooted in his faith in God’s justice). He’s a drunken idiot, shooting blindly while drinking and falling down. Everything in his experience is interpreted as a message confirming his own sense of self. After scaring the Hatfields away, he shouts “WE WON! I WON! BLESS THE BABY JESUS”, as he vomits into a bush.

But his crisis deepens. Eventually the story hinges on McCoy’s deteriorating grip on reality.

“Where is my Justice? Where is it?”

Hatfield appears to McCoy in a vision – almost as a spiritual guru; representing the voice of reason.

“Is there a point where one of us could give way to stop all this nonsense? If ever two men misunderstood each other, it was us. So when does it end?”

“When there’s no blood left to be spilt!”

“That way don’t work, Randall. We tried that way.” 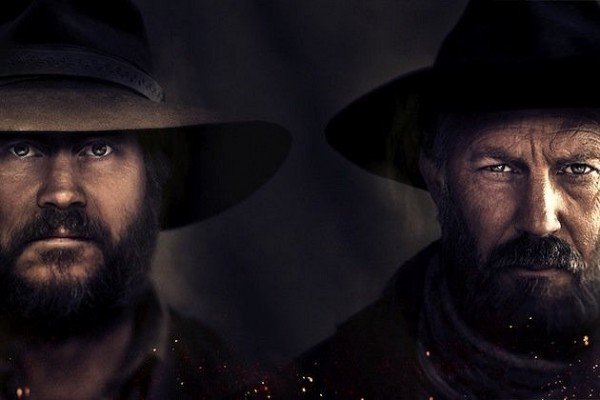 Rather than a daring jail break, Hatfield sagely gives in, allowing one of his relatives to be hanged as a sacrifice and token of peace.

“When cotton top is hanged, it will take away the McCoy bloodlust.”

“So cottontop is a Judas Goat?”

“Someone’s gotta bend to stop it. Randall can’t, so it’s gotta be me.”

McCoy grows old alone, never gets rid of the hate in his heart, eventually lights himself on fire half drunk and crazed, shouting “I’m coming after you, Devil Anse! I’m coming to Hell after you!”

McCoy NEEDS to have everything make sense in his spiritual grand narrative of absolute truths and divine interaction; Hatfield just focuses on family and business and himself.

The moral of the story: Human beings are idiots and assholes, and God doesn’t help.

At least, that would have been the moral; after hours and hours of cementing the principle divide between the two men as religious vs. agnostic they ruined it in the last 30seconds. The end of the entire series, shows Costner/Hatfield being baptised “in the name of the Father, the Son and the Holy Spirit.”

What the fuck? Why have this messy ending, compromising the integrity of the entire series? Hatfield got religious as he aged, fearing death? Hatfield gave up all of his beliefs and decided to conform to the herd of social expectation, perhaps further trying to remove the stain from his family’s history? Did he really Find God? If so, why did everybody call him “Devil Anse Hatfield?”

It seemed to me that, eager to make it blindingly obvious who the hero of the story is supposed to be, they decided to wash away Anse’s “devil” reputation with a quick post-filming baptism seen, so the good majority of viewers could feel at peace with their beliefs about divine justice (good people always find spiritual salvation, bad people always get punished.)

But nope: According to Wikipedia Hatfield was baptized on September 23, 1911 in Island Creek and converted to Christianity. He went on to found a Church of Christ congregation in West Virginia. The source of this information is listed as Lisa Alther’s 2012 Blood Feud: The Hatfields and the McCoys: The Epic Story of Murder and Vengeance.

And suddenly I distrust everything about the History Channel’s reproduction of the Feud. Maybe Hatfield was the real suffering good man, and McCoy was the bloodthirsty violent one (this actually seems to be the standard historical take). If so, isn’t it interesting how easily a violent asshole can turn his powerful personality into a religious calling – going from outlaw to preacher?

Another point of interest

I found another angle from Lisa Alther’s research; maybe the whole conflict was blown out of proportion by the media as a way to discredit the mountain people as sub-human so that the corporations could steamroll their land claims and still their land and timber rights:

Newspaper reporters routinely used disparaging adjectives such as “backward, barbarous, dissolute, idle, primitive, revolting, savage, uncivilized, violent, and wild.” In this regard, the feud had far-reaching and unexpected consequences for the region. Shortly after the conflict ended, railroad, timber, and coal companies began to buy up the land itself or its resource rights for pennies on the dollar, with devastating results for the vulnerable mountain people. “Because other Americans had come to regard the residents of the southern Appalachians as brutal savages, they felt little concern that those savages were now being starved and maimed, their once sparkling rivers murky with toxins, their towering primeval forests reduced to stumps.”

This certainly makes a lot of historical sense given what we know about American politics and media.