I’ve seen Les Miserables several times. The music has always been stirring, but I’ve never been able to bond with the characters as much as I did tonight, when watching the new Hollywood production, which involves closeup shots of the painful, anguished looks on the faces of Hollywood Superstars like………..

There isn’t much missing from the story, love, loss, regret, revenge, anger, comic relief… it’s a powerful tale meant to melt hearts, and it succeeds.

But let’s go behind all that.

What’s the message of Les Miserables? What is it inciting you to do?

Who are the heroes? The poor. The thieves and criminals. Who are the villains? The rich, the government, and the legal system.

Does this sound family? Sure, it’s the central conflict of over a dozen movies we’ve seen in the last several years, from Pirates of the Caribean, to Time, etc… The rich are hoarding the resources, the poor are forced into impossible positions, until they have no choice but to fight back, to rebel, usually led by one charismatic hero (who is always running and running, holding hands with a sexy love interest he’s picked up).

But in the majority of endings, the Marxist Dream is realized – the rich are overcome, wealth is redistributed, debts forgiven. The hero, though injured, survives (with his love interest), to renew the world in their own image. 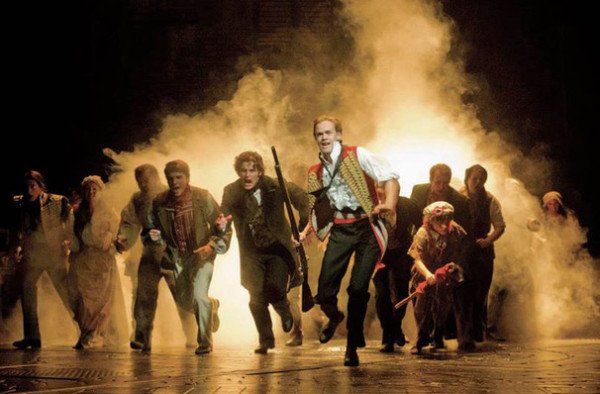 This is almost what we see in Les Miserables – the happy ending of the romantic couple, torn apart by fate and circumstance, but reunited. However, it’s also a Cinderella story, of a young girl born in the gutter of a sick prostitute, who grows up catching the eye of the handsome and super rich prince. She doesn’t destroy the social stratification or bridge the wealth-gap: she joins the rich!

After so obviously painting the young men of the French Revolution as heroic rebels, fighting for freedom, and making the hero of the story (jean be chard) though a thief, so morally GOOD that it forces his nemesis, the law, to question his own paradigm and forcing his suicide, we know firmly that the ethical righteousness is that of the lower classes. The Revolution is JUST, the rich are EVIL…

The young man betraying his rich family to pretend to be poor and help lead the power in a revolution against his own class, is remarkably HONORABLE.

But what happens? The revolt fails. ALL HIS FRIENDS DIE. And then he goes right back to his rich family and continues a life of ease and wealth. The girl who’s mother was a prostitute (did she ever learn the truth about her mother?) grows up wealthy and takes it for granted.

The glorification of a failed revolt – of dying for death’s sake, of refusing to back down against superior power and unavoidable defeat. Of choosing to be shot and be a hero rather than hiding or surrendering the ideals of freedom.