“You just gotta have faith,” seems to be the motto of Percy Jackson: Sea of Monsters (2013). It’s repeated several times. Faith in what, we don’t know – we’re dealing with a pluralistic oligarchy of gods, only one of whom is Percy’s father.

Sure, Percy is the only son, the chosen one, the hero… Percy is the ONLY human son of all THREE of the main Gods (Poseidon, Zeus and Hades). Kind of like Jesus is the only son of the three-part God. Even though he gets a half brother in this movie, but he’s not half human so he doesn’t count). While I’d like to love this series, because I love pagan mythology and ancient literature, the movie dumbs things down to almost a ludicrously benign Christian worldview.

Chronos got split into pieces and buried in a chest somewhere under the world in pre-history (very similar to the new Thor’s plot, an ancient power that gets released, etc.)

But wait – Chronos is huge, and breathes fire, and red and ember-glowing, and has two big freaking horns coming out of his head (in other words, exactly like contemporary depictions of Satan, and NOTHING like Chronos). 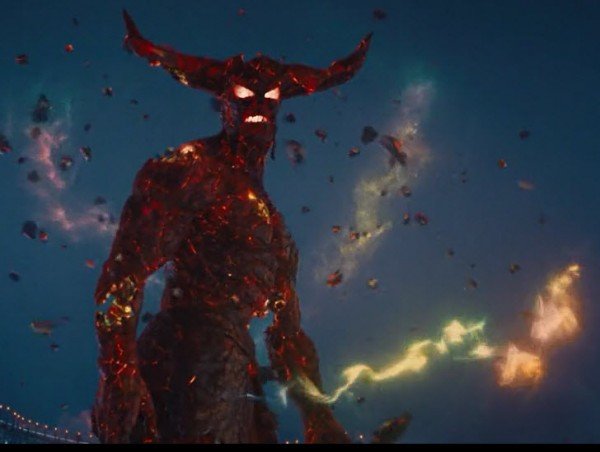 Well, he is a prefigure of time and death, and he sometimes got confused with the Roman version Saturn (not exactly the same)…

Chronos was the ruling King before his some Zeus overthrew him (he heard a prophecy that a son would overthrow him so he ate all his children, but Zeus escaped… kind of exactly like Jesus and Herod).

Saturn is more of a personification of the slow-moving planet Saturn, who rules the harvest/winter and is associated with time and death. I’m not as confident in my understand of early Greek astrology to claim that Chronos was always associated with the same planet, but by Roman times they’d been mixed.

Of course there’s Goya’s Saturn, eating his children, but most other art of Saturn/Chonos show him holding a scythe and a lantern, sometimes with goat hooves and horns (which weren’t associated with “Evil” like they are today). 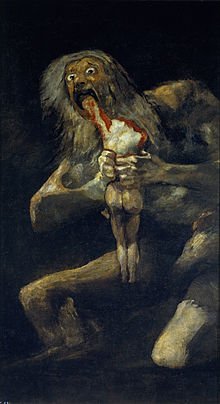 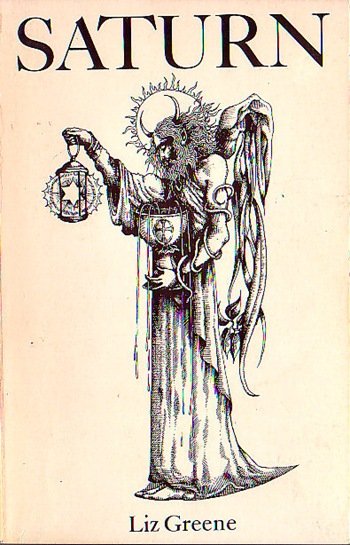 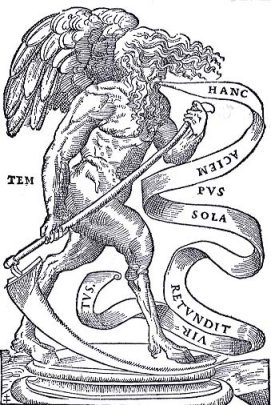 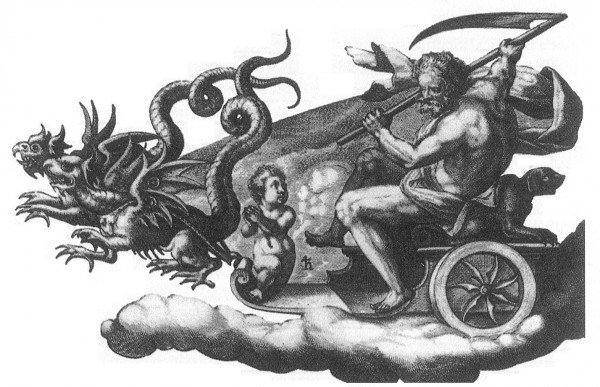 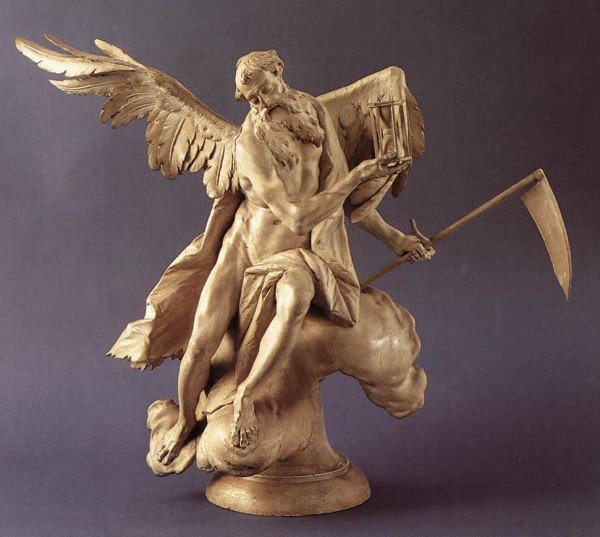 Some more interesting facts about Chonos:

Zeus released Cronos from Tartarus to make him the ruler of the Underworld area called the Islands of the Blest. (Kind of like Satan, but more like Hades, when everybody went to the same place after death and he’s just a god of the underworld…)
Before Zeus came to power, man had lived blissfully in the Golden Age under Cronos’ rule. There was no pain, death, disease, hunger, or any other evil. Mankind was happy and children were born autochthonously from the earth. When Zeus came to power, he put an end to mankind’s happiness. (Zeus is the closest pagan god to the Jewish Yawhew and the god of the Old Testament. No wonder the Gnostics thought he was a “false God” – a demiurge).
Despite his being fooled by the stone in swaddling clothes, Cronos is regularly described as wily, like Odysseus. Cronos is associated with agriculture in Greek mythology and honored at a harvest festival. He is described as having a wide beard. (Satan is also clever/wily, a trickster – this was a positive attribute to the Greeks, but became a sign of evil.)

So fine, we could make the argument that Satan is descended from Chronos and that they are kind of the same thing. Except – only Satan is evil. Only Satan is associated with punishment, pain, hell, suffering. In classical antiquity, death was a natural process. In Christianity, it became a punishment for sin.

Luke, the one “bad” guy is pissed at his father, so he wants to summon the devil. “He rises! Master, I brought you back! My Lord.”

And like all such Satan-worshipers, he’s immediately killed by the master he resurrected.

Percy Jackson blusters,“You know who gave me this sword? The God who killed you with it before – my Father!” (who art in heaven).

All the other gods are, of course, minding their own business in heaven, even though this is a huge, great battle, even though their nemesis has just been brought back to life and they regularly interfere with the lives of mankind, totally they’re just going to sit back and watch what happens.

(Like all other Satan-movies, it’s OK to show Satan and humans fighting Satan, and demons. But God never acts or interferes because he doesn’t want to influence our decisions – he wants us to be responsible/culpable).

“We make our own destinies, right? Show me, I have faith in you,” he says when his friend dies. He’s holding the magical Golden Fleece, but really he’s praying to God (his father? one of the three main deities?)

The fleece doesn’t work immediately, because for the emotional catharsis to work, there needs to be a long, long pause before resurrection. Faith doesn’t count unless you REALLY doubt.

The great thing about Greek mythology is there is no simple system of morality, the gods are not the highest power, there are no rules. There are lots of different stories, and life is confusing. Nobody really knows what’s going on.

But here there is only Salvation and Destruction, Good and Evil (blue light vs. red fire).

Have you read the Percy Jackson books? Do you think they cave into a simple Christian ethics of Good and Evil or have a lot of Christian symbolism?