Denzel Washington’s “The Book of Eli” movie was an unexpected treat: I knew it had something to do with the Bible and religion, but I was unprepared for the complex theological statements, intense action scenes, and surprise ending (which may not have surprised you at all – but I’ll tell you why it should have). More interesting, however, was the divine intervention that determined that the Bible would have a place in the newly reconstructed society – even though it was the book that caused the war that destroyed society in the first place.

If you have seen the movie yet, here’s a run down:

The world has seen some major destruction, and the remaining humans are scattered about in a lawless and violent society. Denzel, aka “Eli” is heading West, carrying the Bible he found under some rubble – exactly where a voice told him to look (the voice is also who told him to go West.) So he’s a man with a mission. He’s also a totally kick-ass fighter (although we don’t really know why) and he shreds whole groups of oncomers. He has no mercy and is basically a cold-blooded killer. All that matters to him is fulfilling God’s mission of getting what’s possibly the last remaining Bible to the West, where he’s been told it’s needed. He also watches a gang rape a woman rather than intervene, because he’s “sticking to the path”.

Then he comes across a little town, where he meets the ridiculously hot Mila Kunis – who propositions him for sex (he’s too holy so he says no) – and Gary Oldman.

Oldman is attempting to reconstruct society, but the only motivation he has to get people to behave is fear and violence. He knows, however, that before the war the Bible used to be the ultimate opium of the masses. He’s looking for a copy because then:

People would truly understand why they’re here and what they’re doing and they wouldn’t need any other uglier motivations. It’s not a fucking book. It’s a weapon – a weapon that will get us into the hearts and minds of the weak and the desperate, get control of them. If we want to rule more than one small fucking town, we have to have it. People will come from all over, they will do exactly what I tell them if the words are from the book. 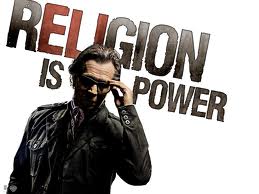 Ok – he’s the bad guy in the movie so we’re supposed to realize that his Marxist, totalitarian speech is “evil” (even though, as usual, I’m on his side: he’s just trying to create peace and stability and give meaning to people’s lives. He appreciates the Bible’s true value and power – to give meaning defining structure and hope to an otherwise meaningless existence).

Denzel sees through him. He says “I believe there is a place out there where this book will be welcomed and appreciated, but it’s not here”. Then he splits, with the hot girl in tow. There’s an epic battle with lots of “boom”, two cannibals die, Denzel gets shot and the bad guys get the book.

BUT Denzel keeps walking. The Bible turns out to be in Braille (although we don’t learn why Eli could read it). Fortunately Oldman’s woman is blind but she refuses to read it for him and all his hopes collapse.

Eli gets picked up by Mila, they drive all the way to San Fransisco and row a boat out to Alcatraz (Denzel rows the boat, although he’s shot and dying, while Mila watches) where some nerdy guys are rebuilding society by collecting literature, art and culture. Eli is treated like a hero, and the head of the institute sits by him and takes notes as he recites the whole damn thing. 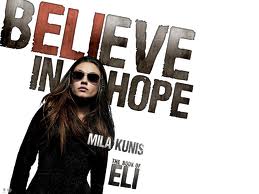 Awesome. So that’s the story. BUT WHAT DOES IT MEAN?? This is where things get really messed up. Despite appearances, this is not a Christian story about an omnipotent God reaching down to offer spiritual guidance. No, there’s something else going on here.

First of all, after the war people destroyed all the Bibles because they were the cause of the war. God digs up the last remaining copy, and everybody is fighting and dying AGAIN. For the book. Eli says we need to live by the book, which for him means “Do for others more than you do for yourself.” He must have missed the part about “Not brutally hacking other people into pieces with a machete or a shotgun.”

But there’s more! Some smart guys were out on Alcatraz already rebuilding civilization. Society would have been restored any way, without God’s help. But God wanted HIS book to be a part of the new society. He didn’t feel it was time to write or inspire a new one – he wanted to keep the 2,000 year old one which had played a part in the total destruction of civilization.

And finally, the movie ends with the triumphant, fully restored Bible being printed so that it will have its place – and where does it go? On a shelf already crammed FULL of religious and sacred texts including the Koran, the Torah, The Tanach, the History of Jews… which basically undermines Eli’s entire quest and demotes the Bible from THE inspired text to merely another spiritual tradition; a historical oddity rather than a divine guide.

So what was the point of Eli’s huge quest. Why did God want him to kill a bunch of people to preserve THAT book, when he knew it would just be one among many?

Oldman had the better understanding of things: the Bible only works when it is THE TRUTH – the one and only text with absolute and complete authority. If it’s just one of many religious books, they all appear as archaic and badly written mythologies and fables. One of the books could be used to quickly restore civilization (although the results would take us backwards rather than forwards), but together they lose their power.

What do you think? If the world nearly ends, which key texts would you preserve? Which books would be the most helpful for future generations, and which books should be forgotten?