I swear not 3 months goes by before I see the movie trailer for a new cinematographic take on the “Demonic Possession” genre.

The newest in this long, long chain of movies (all of which are eaten up by the faithful as pop culture affirmations of religious experiences, based on TRUE STORIES of demonic possession and exorcism), is “The Possession: Darkness Lives Inside.” The tagline: “Fear the Demon that Doesn’t Fear God.”

Proof that Demonic Possession is Real?

“The Possession”, like all exorcism and demonic possession movies, claims to be based on a true story.

But try finding the real evidence to back it up – and you’ll usually come away empty handed (I’ve seen links that go to Catholic Websites that then link to Satanist Groups (who don’t actually believe in a real Satan – they only use Satan as a symbol for humanist values).

However in this case, I found a background story here which is pretty cool. Lots of bad luck.

But at the same time, I can go on Ebay and buy a magic ring full of all kinds of evil spirits or demons ready to gratify my desires.

Look, here’s a 3000 year old ring with magical fire coming out of it! Amazing. For me, an old box full of Jewish spirits is the same thing.

Our beliefs have the power to change our reality, and our perception of that reality.

We see and experience what we believe in.

Why I don’t believe in Possession

1) I’ve experienced demons before. They were a horrifying manifestation of Sleep Paralysis symptoms, which I believe are the root of most religious experiences. I saw and heard demons when I was a Christian. Later, I had UFO abduction experiences. Now that I have no beliefs, I don’t really get them anymore.

2) I’ve also had some pretty serious depression/anxiety/craziness – when I felt like every morning was a nightmare hassle and I wasn’t satisfied with anything, and nothing could make me happy. That’s a serotonin disorder. Not a demon.

3) Religious people, especially Christians, get possessed. The more zealous you are, the more terrified of losing control to those dark forces that are ALWAYS trying to get you ALL THE TIME, the easier it will be for you to lose it. If demons were real, they wouldn’t only attack Christians (unless maybe you think they don’t give a damn about the rest of us, cuz we’re doomed anyway).

But almost all faiths have some kind of demonic possession. Who doesn’t get possessed? Atheists. If they screw up, it’s their own damn fault. 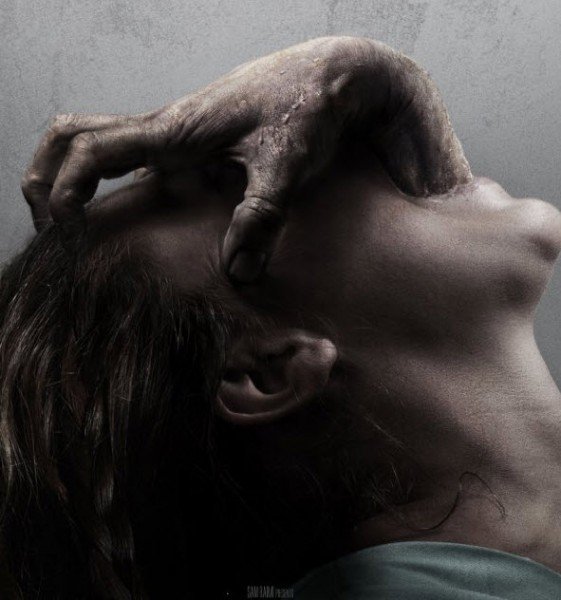 The more important question is:

Who the Fuck is in Control Up There?

OK, sure, God allows us free will. He wants us to love him completely, and he wants it to be our choice.

But he never offered Satan, or the demons (fallen angels?) the same deal. They get to rule Hell, until the end of time.

And yes, maybe even God allows Satan to tempt us (like he did with Job) just to make sure that we really love him (the same way a jealous girlfriend would get a friend to try and sleep with her boyfriend, so he could win her trust by not cheating).

But apparently, if these movies and the whole idea of demonic possession are to be believed, God also allows demons to wander around the earth and take over our bodies by force, against our will, and kill people. And he usually picks children, because they’re freaking terrifying.

So there’s a bunch of murdering kids with demons inside of them. If they die they probably go to Hell.

What’s God doing about it?

It’s one thing to say that James Holmes went crazy and shot people, and God didn’t stop him because he doesn’t interfere with free choice. It’s another thing to say that maybe a demon that God let out of Hell took over his body (rather than just destroying all the fallen angels, God allows them to play a violent and active role in humanity).

The truth is this: all of these “Satanic/Demonic Possession” or “Exorcism” movies are Christian Propaganda, focusing on the only tangible aspect of their faith: the evil. (“God is Love” is an internal emotion – you couldn’t make a movie about how awesome faith makes you feel).

Satan is the god who actually interferes and interacts with humans. Satan is the only one who actually caters to desires and wishes (traditionally, God never gave you what you wanted, and Satan was the temptation of following your desire rather than what God allowed you to have; hence all of the “sold my soul to Satan” literature.)

These days, with “The Secret” and other New Age, Eastern influences, we’ve come to believe that “God” allows us to manifest our own selfish desires, that we are destined to be bountiful, that we are co-creators.

All of that, however, stems from ideas directly taken from a Modernist perspective which was fiercely anti-religious and often openly Satanic (using Satan as a liberal symbol for revolution, freedom, and rationality).

Since the Red Scare of the 50’s, and then the Satanic Panic of the 70’s, (and more recently with the religious patriotism following 9-11), Americans have been forced into religion; to be un-religious was the same as to be, respectively:

Only in the past decade have we begun, slowly, to shake off these shackles and allow creative independence again – and these angry, violent possession movies are the contemporary version of the medieval Hellfire scare tactics that used to get people back into churches.

Are they good entertainment? Sure – but the line “Based on a True Story” promotes a wholesale adoption of a Christian system of Good and Evil which has always been intrinsically flawed; and allowing such a blatant misuse of the word “True” is what allows millions of adults to blur the lines between fiction and reality, believing in Satan but not The Hulk or other fictional  characters.

Now that I’ve seen the movie…

Now that I’ve seen the movie, I have a better picture of the real factors influencing this horrific story (some of these you have to read between the lines of the plot subtext):

Things that almost certainly did not happen:

That’s what “Based on a True Story” and “These Events Really Happened” means.

One great line of the movie:

Dad goes to the Jews for help. They say “These things are best left in God’s hands.”

He says, and I’m paraphrasing, “Are you fucking kidding me? My daughter is possessed by a devil and I should leave it to God?” (implying that, either God allowed this to happen, or he caused it to happen, and he will stop it only when he feels like it). It’s tricky: Belief in Demons should make you an atheist – or at least make you pissed off that God is such an asshole. But it doesn’t.