Tammuz (Sumerian Dumuzi) was the consort of Ishtar. He is mentioned, already in the Epic of Gilgamesh, as a suffering lover of the goddess, a shepherd beloved and scapegoat of the netherworld. When Ishtar tries to become Gilgamesh’s lover, he points out that her past lovers have not fared well. “Dumuzi, the lover of your youth, year upon year, to lamenting you doomed him.” (Gilgamesh 137) When Gilgamesh is mourning the death of Enkidu, he presents a carnelian flute for “Dumuzi, shepherd beloved of Ishtar”, so that he may welcome his friend and walk at his side (epic of Gilgamesh, translated Andrew George, 68). Thus Dumuzi, who was thought to have been originally a historical king that entered into sexual union with the goddess, had also been considered a god in his own right more than three thousand years ago. His demise is tied to the story of Ianna’s descent into the underworld. The reason she gives for entering the underworld is to attend her brother-in-law’s funeral rites (Gugalana, the Bull of Heaven which had just been killed by Gilgamesh and Enkidu). After she decides to go down into the Great Below, she leaves instructions for her rescue in case she does not return. As she descends, she is required to remove one of her seven layers of clothing at each of the seven gates, until she stood before Ereshkigal, queen of the underworld, naked and humble. Ereshkigal ‘fixed the eye of death’ upon her and she was turned into a corpse, and hung from a hook on the wall like a piece of rotting meat. After three days and three nights, her servant Ninshubar, following instructions, tried to get the gods to save her. Only one, Enki, agreed to help. He fashioned two sexless creatures from the dirt under the fingernails of the gods, and gave them the food and water of life to sprinkle on Ianna’s corpse. She returned to life, and Ereshkigal agreed to release her, but she had to provide another in her place. When she came back to heaven she found Dumuzi enjoying himself in her absence (on her throne or under a tree), rather than mourning for her, and ‘fixed the eye of death’ upon him. The demons took him down to Hell; however his sister loved him so much she wanted to go in his place. So, Dumuzi spends half of the year in the underworld, while his sister spends half. During the time that Dumuzi is in the underworld, his lover Ianna misses him; this infertile time was fall and winter. When Dumuzi returns from the underworld and he is with Ianna, their love fills the world with life, causing spring and summer. The poetry of their love is graphic – but also reminiscent of the biblical Song of Songs. 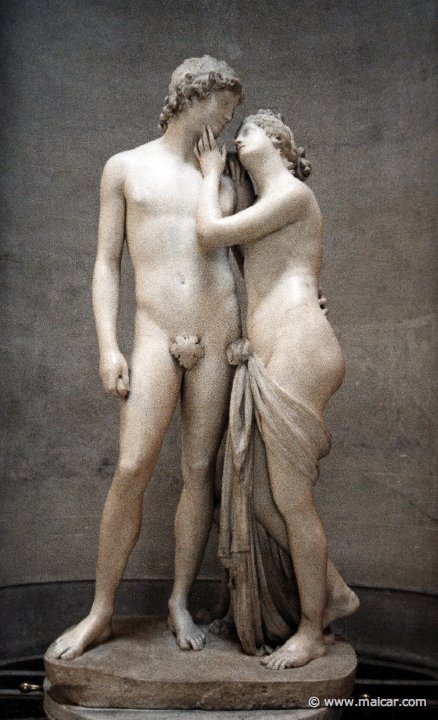 This story is remarkably similar to the myth of Demeter and Persephone; both explain the coming of winter through a goddess grieving for a lost loved one, who then returns.A cult ritual for Dumuzi as the Dying God “began with laments sung as a sacred cedar tree growing in the compound of the temple Eanna in Uruk. The rite seems to have closed with a triumphant procession that followed the god downstream. The god appears to represent the sap lying dormant in the rushes and trees during the dry season but reviving, to the profound relief and joy of the orchardman, with the river’s rise.”  – Thorkild Jacobsen, The Treasures of Darkness.

The mourning of Tammuz was a widespread annual ritual, which even appears in the Bible. Yahweh, giving Ezekial a sort of tour of the idolatry being practiced by the Israelites, points out the women sitting by the entrance to the north gate of the Temple of Yahweh, weeping for Tammuz. “Son of man, do you see that? You will see even more loathsome things than that,” he says (Ezek. 8:14). In Greek communities, Tammuz was called Adonis, and he was considered a consort of Aphrodite. The cult of Adonis existed in Sappho and Lesbos as early as 600BC. As Adonis is a mutation or evolved form of Tammus, in a different cultural setting, the two figures are not exactly the same. The cult of Aphrodite’s paramour Adonis held a special appeal for Greek women, combining the erotic adoration of a beautiful youth with the emotional catharsis of lamentation for his death. The Adonis cult was an early import from the Levant, probably via Cyprus, but while many of the outward forms remained the same, its cultural context and significance changed.

Adonis was modeled upon Tammuz, the consort of Ishtar whose death was annually lamented by women, and his name is a direct borrowing of the West Semitic adon, Lord (Larson 124). There are multiple versions of Adonis’ birth story, but the commonly accepted version is that Aphrodite urged Myrrha to commit incest with her father, Theias. Myrrha slept with her father in the darkness, until he used and oil lamp to learn the truth and chased after her with a knife. Aphrodite turned Myrrha into a myrrh tree, out of which Adonis was born (either when Theias shot an arrow in the tree, or when a boar tore of the bark with its tusks). 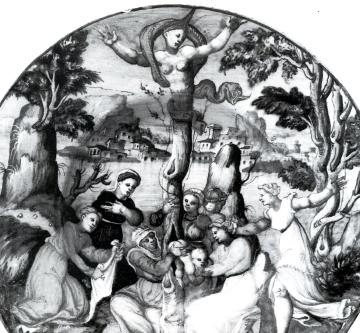 He was such a beautiful baby that Aphrodite locked him in a trunk and gave him to Persephone, queen of the underworld, for safe keeping; however Persephone was so enthralled by him that she refused to return him. Finally Zeus decided that he would be shared – six months with Aphrodite, who later seduced him, and six months with Persephone. (Hamilton) According to Ovid in The Metamorphoses, Adonis met his death by a wild boar. Aprhodite (Roman Venus), who’d been pricked by Eros’ arrow of love, specifically warned him to be careful and stay away from wild beasts:

The wild and large are much too wild for you; My dear, remember that sweet Venus loves you, And if you walk in danger, so does she. Nature has armed her monsters to destroy you –Even your valour would be grief to me. (Ovid, Metamorphoses X)

But the young Adonis ignored her warning (due to “pride and manliness”) and headed off into the wood with his hunting dogs, where he woke a great boar. The boar pierced his white loins with a great thrust, and Adonis bled to death. Although the cult of Tammuz “enjoyed near-universal recognition in Mesopotamia and his festival was so important that a Babylonian month was named after him” (Larson 124), worship of Adonis, although popular, rarely gained state sponsorship. It was viewed as a foreign cult; moreover Adonis was mostly mourned by women, in rituals not tied to a sanctuary, temple or sacred space.Women sit by the gate weeping for Tammuz, or they offer incense to Baal on roof-tops and plant pleasant plants.

These are the very features of the Adonis cult: a cult confined to women which is celebrated on flat roof-tops on which sherds sown with quickly germinating green salading are placed, Adonis gardens… the climax is loud lamentation for the dead god. (Burkert 177)

To perform the Adonia, which took place in late summer, women ascended to the roof, where they sang dirges, cried out in grief, and beat their breasts. Sappho (fr. 140a LP) mentions that the women tore their garments, a standard sign of mourning. Other features of of Adonis’ ritual belon to the cult in Classical Athens. A few days before the Adonia, garden herbs and cereals were sown in broken pots. These tender young plants were brought to the rooftops during the festival, to be withered in the hot sun as emblems of the youthful Adonis’ death. Another custom involved the laying out of Adonis dolls for burial. (Larson 124)

Frazer notes the similarity between the Eastern Orthodox Church and the cult of Adonis; the tradition is much the same even today. They bring out an effigy of the dead Jesus and parade it through town, mourning. They bury it, fasting, and then at midnight on Saturday, cry “Christ is risen!” (Incidentally, it may be noted that “Christ”, like Adonis, is a title meaning lord, or messiah, rather than a specific name; Adonis is even a name for Yahweh in the Old Testament). The resurrection of Jesus was met with joy, shouting, shrieks, and partaking of the Easter lamb (Frazer, 416). Frazer concludes that the Christian celebration of Easter was modeled on the earlier ritual concerning Adonis:

More recent research has denied the claim that Adonis’ resurrection was celebrated; instead the focus always seems to be on the mourning of his death rather than his revival. However, Frazer may have had the cult of Attis in mind, which was very similar to that of Adonis, and did stress, not only the death, but the return of the god.