The Story of Attis:

Cybele, (a Phrygian mother goddess whose cult was introduced into Greece by the 5th century BCE) rejected Zeus as a lover; but he spilled his seed on her while she was sleeping and she gave birth to Agdistis – a wild demon. The gods feared him so they cut off his testicles. From the blood, grew an almond tree. A woman, Nana, took an almond to her breast (or at the fruit) from this tree and 9 months later gave birth to Attis.

Attis was extremely handsome, and his grandmother Cybele desired him. Having no idea about his divine nature, he fell in love with the beautiful daughter of the king of Pessinus and wished to marry her. Cybele was so jealous she drove him crazy. He ran through the mountains and castrated and killed himself at the foot of a pine tree. From his blood grew the first violets. The tree took Attis’ spirit, and his flesh would have decayed if Zeus had not helped Cybele bring him back to life. Another version says that Zeus, angry at the Lydians for worshipping Attis and The Mother, sent a wild boar, who killed him and destroyed the Lydian Crops. In still another version, Attis was killed accidentally by a poorly thrown spear during a boar hunt. (Frazer notes that bulls sacrificed during rituals were bled to death with a consecrated spear – which probably has its roots in this myth, thus tying the death of Attis in with the cleansing blood of the bull). 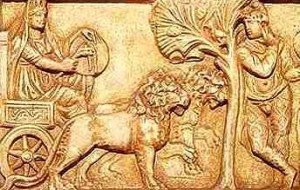 In works of art Attis is represented as a shepherd with flute and staff; sometimes near or under a tree.

The cult of Attis and Cybele became extremely popular in Greek and Roman society, and a public festival, commemorating the death and rebirth of Attis, was the first of its kind to be celebrated in Rome.

“Noteworthy variations distinguish the versions of the legend, but from the time of Claudius (ad41-54) Romans took part in March in a kind of ‘holy week’ whose rites conveyed the myth of Attis, a god who died and came to life again each year; it was the first of its kind in the liturgy of the Urbs. The methods may have evolved before becoming fixed in the Antonine period, but its highlights were celebrated as early as the first century.” (The Gods of Ancient Rome, Turcan, 111-112.)

The ‘Passion’ of Attis began on the 15th of March with a procession of reed bearers. On the 22nd, a pine tree was cut, and a ram sacrificed on the stump. The tree was wrapped in wool, like the corpse of Attis had been, and carried to the sanctuary. The 24th was a day of mourning and fasting; but “after a night of doleful lamentation, on 25 March, the joy of the Hilaria erupted, celebrating the revived Attis. In the imperial period it became the great springtime festival enlivened by a kind of carnival (Turcan, 113).

“The next day was one of vociferous mourning, and on the day following, the ‘day of blood’, the Mother’s worshippers would whip themselves and some of them, carried away by ecstacy, would perform the irreversible act. With the dawn of 25 March came the day of rejoicing for some – convalescence for others – as Attis’ resurrection was celebrated.” (112 godwin).

Besides the public ceremony, Attis had his own mystery cult. Followers abstained from pork because a boar killed their god. The great Basilica of St Peters on Vatican Hill is founded on a site of Cybele worship, which once included the Taurobolium or the sacrifice of a bull and the use of its blood in purifying rituals. Initiates who underwent the somewhat gruesome process of the Taurobolium were said to have been “born again.”

…washed in blood, the worshipper would emerge to ‘receive the homage, nay the adoration, of his fellows as one who had been born again to eternal life and had washed away his sins in the blood of the bull.” (424, Frazer)

It is worthwhile to keep in mind that blood sacrifice for the forgiveness of sins or to attract favors from the gods was also an integral part of Judaism (Leviticus 17:11: “For the soul of the flesh is in the blood and I have assigned it for you upon the altar to provide atonement for your souls; for it is the blood that atones for the soul.”) Thousands of animals (bulls and rams) were sacrificed at the Temple in Jerusalem up until it was destroyed in 70AD). “Poorer people made do with a criobolium, in which a ram was killed, and were ‘washed in the blood of the Lamb’. (111, Godwin)

Initiates from the mysteries of Attis would need to recite certain magical formula or creeds:

“I ate from the tympanon, I drank from the cymbal, I carried the composite vessel (kernos), I slipped under the bedcurtain (Clement Protr. 15.3, Firmicus Err. 18.1 )(cited Burkert)

“I have eaten from the  tambourine, I have drunk from the cymbal, I have penetrated behind the curtain of the nuptial bed”

The most zealous of Attic priests, the Galli, became eunuchs by castrating themselves – a sacrifice said to have been made also by Origin, one of the first great Christian apologists, and not alien to the Christian tradition: “For there are eunuchs who were born that way from their mother’s womb; and there are eunuchs who were made eunuchs by men; and there are also eunuchs who made themselves eunuchs for the sake of the kingdom of heaven. He who is able to accept this, let him accept it.” (Matthew 19:12)

Similarities between Attis and Jesus

The most obvious similarity between Jesus and Attis is, of course, the Christian celebration of Easter. A god that dies, is mourned, and celebrated after three days as having risen from the dead; a god who initiates redemption or salvation, (through his own suffering and death), where initiates can be washed in blood and free from sin; these similarities seem more than coincidental – and there is no doubt that Attis came first. The ‘Holy Week’ of Attis was already a State Ceremony by AD 41-54 – decades before the gospels were written. Moreover, Cybele had been worshiped by Romans for centuries, (she was credited with an exceptional harvest in 204BC (Pliny, NH,18,16)), and “numerous clay ex-votos depicting Attis (many of which are datable to the second century BC), unearthed during excavations in the temple cella, prove that the god had already reached the ordinary populace.” (Turcan, 111)

“And if generations of Christians believed that Jesus died on the cross as the only means to pacify his father’s anger at mankind, it was no more absurd for the devotees of Attis and Cybele to worship a jealous goddess and her mutilated son.” (Godwin, 111)

Critics have argued, incidentally, that stories about Attis nowhere explicitly mention any kind of salvation or afterlife prospects:

In a study devoted entirely to the subject of “soteriology” in the Attis cult, Gasparro finds no “explicit statements about the prospects open to the mystai of Cybele and Attis” and “little basis in the documents in our possession” for the idea of “a ritual containing a symbology of death and resurrection to a new life.” [Gasp.AAO, 82] (http://www.tektonics.org/copycat/attis.html)

Instead, they argue that Attis may have offered some benefit in this life (although what possible benefit could be great enough for followers to castrate themselves, they don’t dare to guess). They have also argued that Attis was not actually resurrected – at least not until much after the spread of Christianity. As usual when confronting such die-hards, there is no way to convince them to follow basic steps in common sense, logic and reason. Thousands of followers of Attis mourned, and then celebrated a story about Attis’ death and return; there is much evidence that this ritual process happened annually in Rome and other parts of the empire in the 1st century AD. Moreover, several other mystery cults with nearly identical symbolism are much more clear in labeling the tangible, exact afterlife benefits of initiates. We also know that the Attis cult was a mystery religion, and that key truths were never revealed openly, not written down and only hinted at in art.

We can either conclude that there was something meaningful enough to attract large numbers of passionate followers, or take the condescending position that Attis offered absolutely nothing but a thrilling story, and that the Galli castrated themselves for show.