I just read Satan’s Journal about Jesus and contemporary art – what a load of bull! It’s obvious he just woke up on the wrong side of the bed; his grumpiness pervades the whole account.

The truth is, Christianity practically invented art! 80% of all the paintings ever finished are Christian paintings (OK – half of those are landscapes or still lives of fruit, but they were painted by Christians who saw My Hand in all Creation). The Jews and Muslims have never had a strong artistic tradition (just a lot of geometric designs) and other cultures mostly did sculpture. Painting as an art form grew and was perfected almost entirely under European Christendom. Technically I forbade any kind of representational crafts in the 10 commandments – but I let it go and I’m glad I did.

What about Michelangelo’s Sistine Chapel or Da Vinci’s many biblical scenes? So what if they were commissioned by the Vatican – this just proves that the church has always been a strong supporter of the arts.

Sure, the church hasn’t always seen eye-to-eye with modern painters, but most of their work is garbage anyway. I mean come on – Dali was obviously insane and addicted to sex, all those messy ‘abstract’ paintings are completely devoid of meaning or skill, and contemporary art is usually harmless; rough and dirty graffitti-esque popart. Human beings will throw money at anything rather than just share the resources the have to feed each other.

And this Derek Murphy guy? Who the heck is he. I googled him and found this abhorrent picture:

What the heck?! I can’t even look at that. It makes me all hot and bothered and upset. That’s not art, that’s just mean. That’s defamation.  That’s sick. That guy’s got a sick and twisted mind. Of course Christians should feel uncomfortable around that – that’s an attack on everything they hold dear!

And geez – Christians are people too. They like beautiful things. They like art. They like to participate in social events. They are trying hard to hold onto their faith, be good people, live peaceful lives – what right has this Murphy guy got to put stuff like that out in front of them? It’s just rude! It’s a free planet (in some parts, sort of). Christians can go anywhere they want. Of course some will go to the exhibition where Murphy shows his work. Doesn’t he care how they’ll react? He’s got a lot of nerve to display stuff like that in public.

You want a good artist, stick with Norman Rockwell. Normal Rockwell’s paintings of boy scouts are holy, patriotic and expertly crafted. Now he’s an artist I can support! 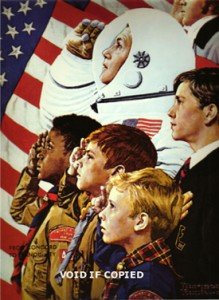