Today I stopped in at a contemporary surrealist artist’s exhibition. (See his works at www.derekmurphyart.com). His work is all about ‘breaking established paradigms’ and ‘creating space by stopping ideological patterns’ or some rubbish like that. Mostly, his work just makes me chuckle and I like to watch those with more sensitive disposition look uncomfortable and squemish and self-conscious; unsure how they feel about the art because they’re already worried about what their reactions ‘should be’ or how other people are going to view their reactions. 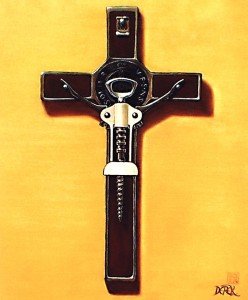 As I was looking at this piece, a young woman next to me engaged me in conversation, by asking “Are you a Christian?”

Now first off – this is not by far the most controversial painting in Derek’s Arsenal. It’s clever, and pretty well executed, but lacks the messy craziness of some of his more recent works. I once heard another Christian say about it – “It combines two of my favorite things, Jesus and Wine!”

The woman next to me, however, was having more trouble with it. I could tell immediately that she had no opinions of her own – her response to the painting would be based entirely on what the author meant by it. Was it an attack of Christianity or in support of it somehow?

It peeved me a little that, rather than opening with something about the art, even as boring as “What do you think about this piece?”, she decided to seek solidarity with me by identifying my religious affiliation.

Then she looked at me with her big, round, unblinking eyes and said “Don’t you ever feel sad or lonely?” She said it, not with incredulity, but as if in awe of my super powers.

“But – what do you do about it? You can fix yourself all by yourself? Just in your head?”

At the time I didn’t have any suitable answer to give her. Obviously, she was thinking without the loving, tender care of her personal savior she would just fall apart (and she would, too. She was obviously a very cloistered, sheltered individual with no common sense or worldly experience).

However, it was much to complicated to go into the Truth, so I stalled by saying “Well, I believe in God” (why does it keep surprising you that Satan should believe in God. DUH! Who threw me Hell for all eternity!?).

She looked a little relieved. But then I pushed on by explaining how, the point of Christianity was ‘love one another’; but a particular religion would limit my ability to love people of other religions. Christians (as she admitted herself) rarely get along with everybody in their own church!! And they most certainly don’t get along with non-Christians, or contemporary artists making a mockery of religious icons. The belief in God and belief that humans should love and treat each other with respect prohibited me from becoming Christian. At this point I realized I was both preaching and defending myself (why is it, in these modern times, that the more rational, logical people are always defending their godlessness against believers of ancient fables?)

My point is this: keep Christians away from modern art! Ok, sure, there are exceptions. I have Christian friends who are brilliantly able to keep their faith out of their real lives or interactions with other people. But for those Christians who are always monitoring the appropriateness of everything, they have no place in the art gallery. They can’t see the paintings, or anything else in life, objectively. They can barely see three feet in front of them! They walk around in their blissful little bubble and try to bring everybody into their little bubble with them.