While you may be familiar with the more popular public debate between Christians and J.K. Rowling’s ‘satanic’ franchise of books starring a young wizard, Harry Potter (who zealous parents accuse is promoting the use of witchcraft and devil worship to children), the less vocal conversation about Christian symbolism in Harry Potter may have gone under your radar. But if you’re a fan of Harry Potter and have paid attention, you can probably guess how the story is going to end (if you haven’t read or heard the ending already that is); this is because the story of Harry Potter is a direct parallel to the biblical history of Jesus Christ. Inside the series – both the Harry Potter books and movies – there is a Christian framework, and Christian symbols hiding in plain sight.

And I’m not just talking about generic stuff like “Good triumphs over evil”. No, there are specific, precise similarities between Jesus Christ and Harry Potter that, given the cold treatment by conservative religious folk, are surprising. A short list of these include: 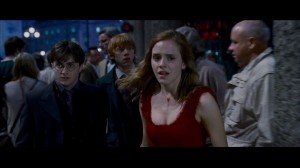 These features have been noticed already by several blogs. Abigail BeauSeigneur, for example, in her article “Is Harry Potter the Son of God” says “The story of Harry Potter is, and always was, a Christian allegory – a fictionalized modern day adaptation of the life of Christ, intended to introduce his character to a new generation.” Abigail makes the claim that Rowling is a conscientious closet Christian who designed Harry Potter to mimic Christ’s ministry.

According to John Killinger, “Harry Potter . . . is a witting or unwitting Christ figure who actually battles the forces of darkness for the souls of the faithful and wins a place in readers’ heart  because he so admirably conforms to our expectations of such a redemptive figure.” (God, the Devil and Harry Potter, 14)

Based on the similarities between Jesus Christ and Harry Potter, many fans were able to accurately predict what would happen in Book 7, the Deathly Hallows:

But perhaps Harry will perform the ultimate sacrifice by defeating Voldemort and dying himself so everyone else will have the chance to live on. We really won’t know until the releases of Half- Blood Prince and Book 7, but it’s still fun to make predictions based on the possible foreshadowing and Biblical symbolism. (Biblical Symbolism in the World of Harry Potter)

His death will be a noble one, it is prophesied in the blogs, a death both sacrificial and necessary to save the world from the satanic Lord Voldemort. I agree with this line. I also expect Harry’s death to show that his character’s path is modeled on the Gospel accounts of Jesus, and, more significantly, that the link between him and wizardry-school headmaster Albus Dumbledore is patterned on the most essential relationship in the Christian Bible — that between Jesus the Son and God the Father. (Diamant)

And with the release of the Deathly Hallows, they were proven right. Harry Potter does die a sacrificial death of sorts, and he goes willingly, fully understanding his role as victim and martyr:

Finally, the truth. Lying with his face pressed into the dusty carpet of the office where he had once thought he was learning the secrets of victory, Harry understood at last that he was not supposed to survive. His job was to walk calmly into Death’s welcoming arms. Along the way, he was to dispose of Voldemort’s remaining links to life, so that when at last he flung himself across Voldemort’s path, and did not raise a wand to defend himself, the end would be clean, and the job that ought to have been done in Godric’s Hollow would be finished: neither would live, neither could survive. (Deathly Hollows 554)

“But I should have died – I didn’t defend myself! I meant to let him kill me!”

“And that,” said Dumbledore, “Will, I think, have made all the difference.”  (Deathly Hollows 567) 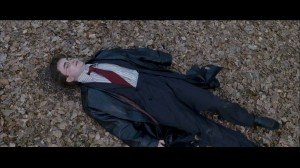 It may be argued that he didn’t “truly” die or didn’t “truly” resurrection; but Dumbledore makes it clear that, if he so chose, Harry would ‘go on’ to other things, leaving his body behind.

“Oh yes.” Dumbledore smiled at him. “We are in King’s Cross, you say? I think that if you decided not to go back, you would be able to… let’s say… board a train.”

“And where would that take me?”

Harry was subjected to humiliation by his enemies, as Voldemort (believing Harry to be dead) celebrated his triumph by performing the “Cruciatus Curse” on Harry’s body (582). He was carried in a procession and mourned by his friend and colleagues. But then, to everyone’s joy and amazement – he is not dead! He rises victorious to challenge the Lord of Evil in one final battle, and defeats him! (Yeah Jesus – uh, I mean Harry.)

Not everyone is impressed with this parallel; after all, nearly every mythical/fictional character appears to die and come back, it heightens the dramatic tension.

Of all the irritating literary games people play, Find-the-Jesus is one of the most wearying to me. Not every book has Christ symbolism. Let it go. People use stairs. People suffer. People have fathers. People make noble sacrifices. And, in fantastic stories, people come back from the dead. Odin did it. Osiris did it. Sherlock Holmes did it. Buffy did it. Spock did it. Hell… Voldemort died and came back. It takes more than that to make a Christ figure. You want good Jesus symbolism in a fantasy story? Go to Aslan in the Lion the Witch and the Wardrobe. There’s a Christ figure for you. Harry is, at best, just following a standard sacrificial hero archetype. It’s a storyline that was old before Jesus was born. (Harry Potter, Christ Figure?) 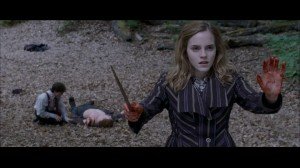 But perhaps a more unique similarity between Jesus and Harry Potter is Harry’s quest to destroy the 7 magical horcruxes that are preserving Voldemort’s evil soul. In the Book of Revelations, before the ‘end of times’ someone needs to destroy the 7 seals of a book or scroll holding secret information known only to God. Like Harry, Jesus is the only one suitable for this task. Jesus is both the Lion (victor, king) and also sacrificial Lamb. Moreover, part of his special role is through his bloodline (from King David).

“And one of the elders saith unto me, Weep not: behold, the Lion of the tribe of Judah, the Root of David, hath prevailed to open the book, and to loose the seven seals thereof”. The Crown Prince of Israel during the united monarchy (and later the Crown Prince of the Kingdom of Judah during the divided monarchy) came from the tribe of Judah. Jesus in Christian traditions is the King of Kings, not the Crown Prince. The Lion of Judah is a deliberate direct reference to a worthy Prince “Of the Blood of Christ”. The seven seals were opened, one by one, by the Lamb. “And behold, and, lo, in the midst of the throne and of the four beasts, and in the midst of the elders, stood a Lamb as it had been slain, having seven horns and seven eyes, which are the seven Spirits of God sent forth into all the earth.” (New Testament Book of Revelation 5:5-5:6)

Like Jesus (both divine and human), Harry Potter is a ‘mud-blood’; with one ‘magical’ father and a ‘muggle’ mother. Also, Harry finds out that he is a descendant of the Peverell Bloodline – a magical brotherhood who created the original “Deathly Hollows”. These three extremely powerful items, given to the brothers by Death himself, turn the final plot. (Incidentally, an argument could be made for reading a Holy Trinity into these objects. 1. God=Elder Wand 2. Jesus=Resurrection Stone 3. Holy Spirit=Invisibility Cloak.) 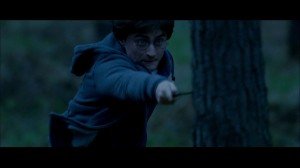 So it seems there are parallels between Jesus Christ and Harry Potter which are not incidental. This was confirmed by JK Rowling herself in an interview, where she mentions how her religious beliefs have influenced the book.

J.K. Rowling: Well, there… there clearly is a religious… undertone. And… it’s always been difficult to talk about that because until we reached Book Seven, views of what happens after death and so on, it would give away a lot of what was coming. So … yes, my belief and my struggling with religious belief and so on I think is quite apparent in this book. (TodayShow/Dateline NBC Interviews July 29, 2007)

At any rate, it will be interesting to see whether or not the Christian symbolism in the Harry Potter 7 movie will be played up; will Harry, as he receives the ‘Cruciatus Curse’, raise his arms up in a helpless, suffering imitation of Christ? Will we witness any subtle cross imagery? Will the place he goes to when he dies look like heaven? Will Dumbledore appear to him in the Voice of God? Will Hermoine tear her hair and wring her clothes like Magdalene?

Probably not. But still, be mindful of the way these parallels between the Bible and the Deathly Hollows might be portrayed.