Apparently Peru’s outgoing president Alan García has decided to leave Peru with a parting gift: a “new” world’s tallest statue of Jesus, which is basically a carbon copy of Rio’s Christ the Redeemer statue. Although García claims it will “bless Peru and protect Lima” others have been more critical. One prominent architect, Augusto Ortiz de Zevallos, called it an “excessive and authoritarian gesture” lacking in “aesthetic, historic or symbolic” significance.

In the news today is Poland’s new giant Jesus statue, which may or may not be the largest statue of Jesus in the world. (The whole world, really? And from a small town of only 22,000 people called Swiebodzin?) On the one hand, this is obviously a feel good fluff piece about a small community coming together to produce something magnificent, fulfilling the dreams of the 78 year old priest who thought it up. On the other hand, just by trying to make the world’s largest Jesus Statue, this small Polish town is effectively agreeing that SIZE MATTERS – even in matters of faith and religion. But is it really fair to limit this competition to Christianity? How does the Son of God compare to statues from other religions, or secular statues for that matter? If producing a big statue of your savior is a virtue, couldn’t we choose the ‘best religion’ based on which religion has created the most enormous idols of their faith? According to Yahoo! News (Associated Press):

Rev. Sylwester Zawadzki, the 78-year-old priest who created the statue said it rises 108 feet, or 33 meters — one meter for every year that Jesus lived. Other members of the construction team, however, gave differing figures. One said it rises 167 feet (51 meters) if you include a mound it sits on and the crown on the head. 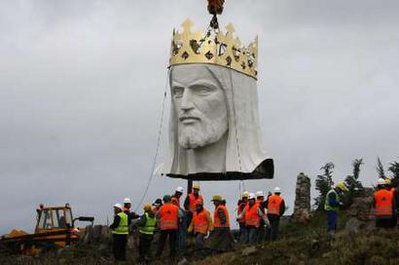 From the pictures showing the massive head of Jesus wearing a golden crown next to a few tiny humans, it does appear to be mighty imposing. I particularly like the stern, disapproving face (Poland is Roman Catholic) and the royal looking crown. Clearly, Jesus is King. But how does he measure up? The next most famous giant statue is of course Christ the Redeemer of Brazil; the one that always gets destroyed by alien attacks, tsunamis, earthquakes or other mayhem in apocalyptic movies. This international symbol is only only 39.6 metres (130 ft) tall, including its 9.5 meter (31 feet) pedestal. So take away the base measurement and yes, it seems Poland’s new Jesus is the winner. Of course, we should point out that he’s standing on a pile of rubble, rather than a solid basis, and appears to be out in the middle of nowhere, rather than perched majestically on a hill in the middle of the city. 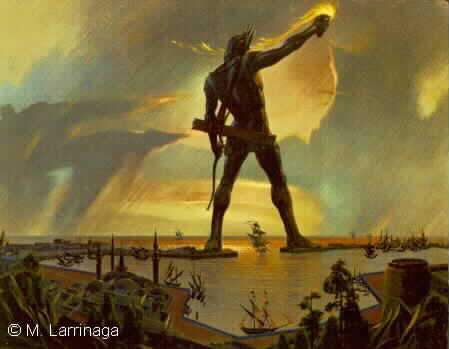 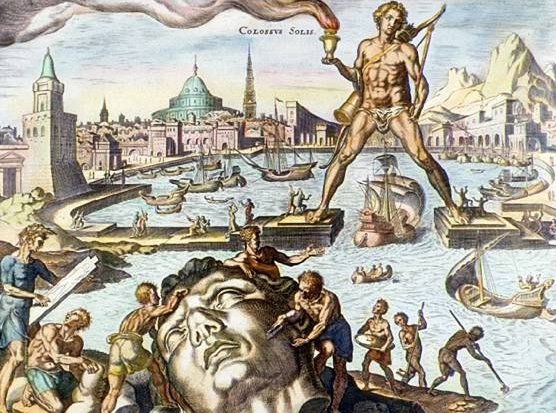 However, both statues are only a little bit taller than the legendary Colossus statue of Rhodes, one of the 7 great wonders of the ancient world, which was about 110 feet with a 50 feet base. And it was made of bronze, over 2000 years ago. (Although it only lasted 65 years before being toppled in an earthquake). And compared to many other giant religious statues in the world, Jesus Christ is positively height-challenged. 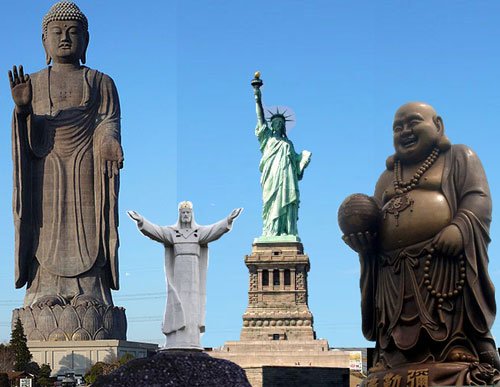 Oversized Jesus statues are definitely sub-par. On a list of several dozen statues taller than Jesus, there’s a 37m Shiva, a 40m Genghis Khan, a 40m Guan Yin, and a 46.7m Mary (“Dammit, mom! I’m sick of being in your Shadow!”). Even the Statue of Liberty, at 46m, is taller than Jesus. But there’s more. The 71m Buddha was carved into a cliff face in Leshan, China – about 1200 years ago. The Great Standing Maitreya Buddha of Taiwan is almost double the size of Jesus (72m), way more detailed, and laughing. The “Great Buddha” of Thailand is 92m, sitting down! And one of the world’s tallest statues, the Japanese Amitabha Buddha, towers over Jesus at a whopping 110m. 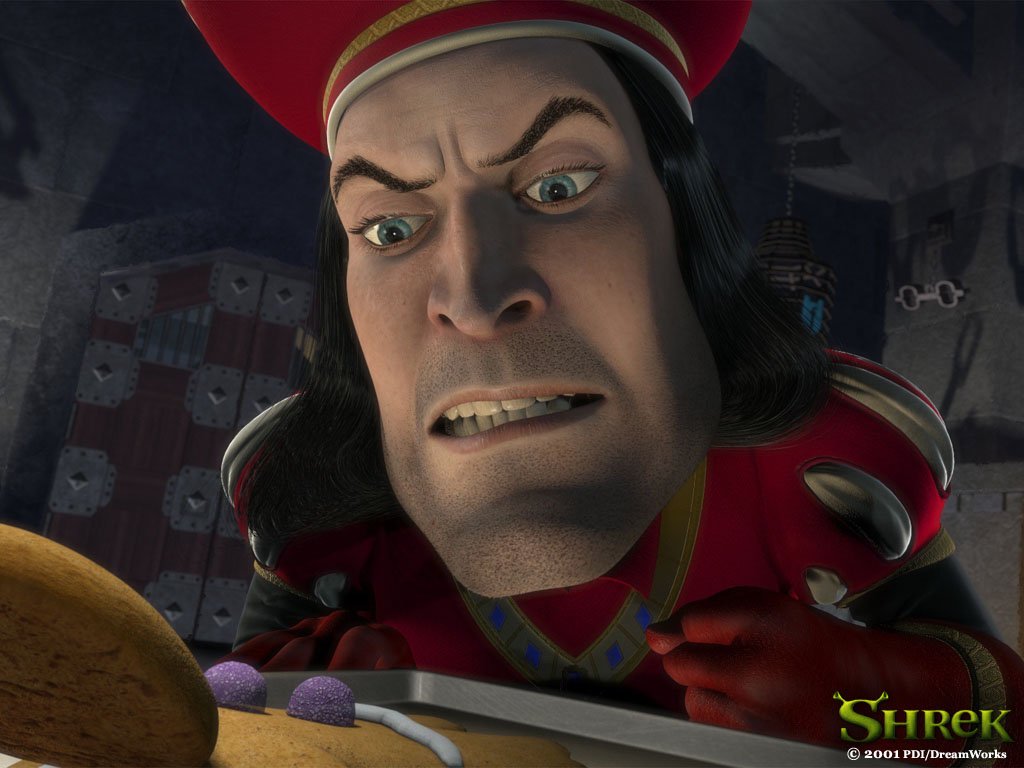 Poland’s angry little Jesus Christ statue with it’s BurgerKing golden crown reminds me a little bit of Lord Farqaad from Shrek; they even look alike (it’s the eyebrows, long hair and quest for power). Isn’t Jesus, despite his conquests of the Western hemisphere (by plague, genocide and white domination) really just a small player, shaking his fights against the spiritual giants that preceded him – for example the Buddhas that laugh or sit calmly, completely ignoring his existence? On the other hand, we might be looking at this all wrong. Isn’t the creation of giant, phallic shaped statues a clear sign of penis envy/ overcompensation? Is it perhaps telling that the majority of these large statues come from Asian countries, which stereotypically should be the place to find the world’s smallest penises? At any rate, I’m not impressed by Poland’s new statue; also out of Poland recently is the controversial movie “mall girls”, which is about the real phenomenon of young Polish teenage girls doing sexual favors in public toilets in exchange for LV bags and cosmetics. Perhaps this statue is a desperate attempt to redeem Poland in the eyes of the religious world? Or is it – as the mayor admitted – a plea for tourism, designed to attract visitors to improve the town’s failing economy? (The town opted to build a big statue of Jesus to “bring in needed money to renovate the historic buildings” – rather than just fixing up the buildings themselves). 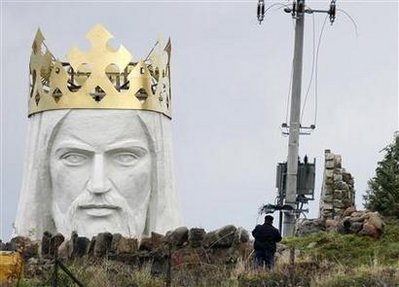 And why is it that America, the self-professed Christian Nation, doesn’t have any giant statues of Jesus? Why is America full of big statues of Paul Bunyon and his Giant Girlfriend; The advertising icon the Jolly Green Giant; Lady Liberty (who is secretly a big French statue of Isis – the same disgusting woman demonized in the Book of Revelations); a Giraffe; Mt. Rushmore – and all of these are way, way down on the list, smaller even than the Jesus Statues. Perhaps, being an essentially pragmatic culture, we simply recognize, despite all our professed religiosity, that building a huge statue with absolutely no practical function or utility, is a giant waste of resources. Click here for comparison chart of world’s tallest statues.