I can’t help but write a post after reading an article called “Is Jesus Christ Reaching Out to Muslims Through Their Dreams?” I found on The Blaze.

Basically, (according to the article), devout Muslims are having spontaneous dreams about Jesus, who touches their hearts and foreheads and says “You’re mine, Follow me.”

If it’s really happening, it’s a small miracle, because it’s hard to account for any psychological factors that would make Muslims dream of Jesus.

Christians have Jesus-experiences all the time. Muslims don’t.

So on the surface, this is amazing.

My first thought was that some US Government anti-terrorism plot is experimenting with a form of mind control; maybe broadcasting subliminal messages at high frequency to Muslim communities to see if their subconscious will “tune into” Jesus.

If they accept Jesus, they’ll probably be much easier for the US to work with.

It’s probably not a genuine miracle, though, because: why isn’t Jesus appearing in the dreams of American Atheists or Chinese Buddhists? Why not appearing to everybody at the same time? Why wait till they’re sleeping? Why do these sort of miracle conversions only happen to a handful of people? Is Jesus specially/arbitrarily selecting one out of every million? Is he too lazy to do more? 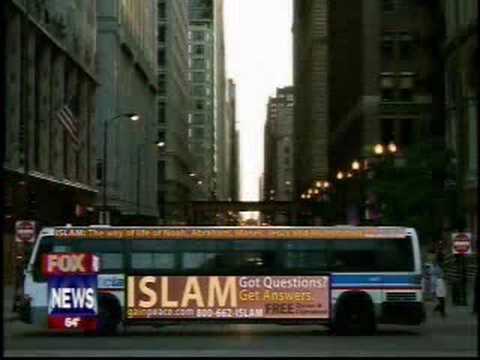 To put things into perspective, this Islam Bus Advertisement is converting more people to Islam than Jesus’s dream-visits are converting to Christianity.

So then, how else can we account for the phenomenon?

The article and related sources focus on a handful of experiences, about six, but say that this is happening on a much wider scale, all over the world. And it’s true, Christianity seems to be the fastest spreading global religion (depending on your sources). But the fastest growing religion in the USA and EUROPE is Islam.

What it means, is that Westerners are turning away from Christianity and looking for something new – and they’re finding it in Islam, due to the evangelical efforts of immigrants. Meanwhile, Christians aren’t successfully converting anybody from Western countries, so they have to go really far abroad, to impoverished culture who have nothing to lose and are smitten with the opulence of the Western lifestyle, and who are eager to make white, English speaking friends, and gladly accept the mantle of Christ.

My point is that conversion and de-conversion rarely has supernatural forces, but instead is a result of politics and economics.

And secondly, what’s the source?

The figure behind this fictionalized account of miraculous Jesus-Dreams sweeping through Islam is Pastor Tom Doyle. Doyle felt God calling him to leave the pastorate and become a full-time missionary in the Middle East and Central Asia. Now, he’s publicizing himself, his mission and his successes through DVDs and books about how Muslims are converting to Jesus.

“This is the time when hearts are open, people are desperate, governments are changing”

“Everybody’s foundation has massive cracks in it and Jesus is the answer that can come in and fill that need.”

“Many veteran missionaries to the Muslim world say dreams and visions, along with satellite television, are introducing Muslims to Jesus in unprecedented numbers.”

So basically Jesus is the void that fills up people’s lives when everything goes to shit (that’s the case in the West, also). Interestingly, a few of Doyle’s subjects, who had dreams of Jesus and were featured in Doyle’s More Than Dreams documentary, were alcoholics, desperate for a cure (in my experience, addicts and alcoholics are the most desperate, and more grateful, new converts to Christianity. When a branch of hope is offered to them, they seize it.)

Here’s what I think happens

Missionaries like Doyle, or most other Christian literature/websites, share the “ask God” test: all you have to do is pray and ask God to give you a sign and let you know if you should become a Christian. The reason this is marketing gold, is that on-the-fence converts who aren’t ready to convert but are starting to get a little interested, will let their minds trick themselves into taking the next step.

If you pray to God to show you a sign of whether or not you should accept Jesus, do you know what you’re going to see? A freaking sign. You’ll have a dream, or some little coincidence will feel like God directly interfering with your life. You’ll be amazed.

(If I prayed to God about accepting Muhammad as my savior and becoming a Muslim, who do you think I would dream about?)

So then, after having these dreams about Jesus, the missionaries say, “See, I knew it – that’s God giving you a sign! He wants you to become Christian!”

A little bit of influencing and manipulation, and people convince themselves that they’ve had a miraculous conversion experience.

PS. I had vivid dreams about saving my GF from zombies last night. I vividly remember cutting off the top of one’s head by slashing a shovel deep into its mouth. What’s that a sign of?

PPS. I’ve also had deeply traumatic paranormal dreams/sleep paralysis experiences of God, demons and Jesus. I know how incredible powerful they can be in affirming beliefs. That doesn’t make them real.

PPPS. St. Paul’s conversion experience, and also Muhammad’s, sound much more like Sleep Paralysis than anything else.