I wasn’t expecting much from Batman v Superman: Dawn of Justice (2016). I’d seen all the bad reviews and hype online. It looked silly, but I was desperate to kill time and eat popcorn, so I went. Firstly, it’s a great movie – better than most other Marvel flicks. Secondly, it’s worth two years at Seminary school.

The whole thing is a messy metaphor for God, the Devil, Jesus, and religious belief in general. I’ve made similar claims against lots of other movies. And sure, usually you can find some kind of religious theme behind most major movies. And Superman has always been a Christ figure.

But usually it’s at least a little bit a little bit indirect or vague. Something you have to notice, realize and think about. Something that’s a cool theory, but not an obvious, over your head, the only way you can interpret the movie kind of thing.

Batman v Superman is riddled with theological terminology and escatalogical ruminations; questions about power v freedom, and the limits of morality. My favorite part, the symbol that really sums up the whole movie, is a painting of the devil being expelled from heaven by Michael. Lex Luthor says it should really be turned upside down, and at the end of the movie it is. That’s blatant symbolism, telling us that the moral polarities of Good and Evil have been directly inversed through the episode found in the movie.

Let’s consider how we got there.

The first point of conflict is the debate about Superman. The question isn’t really whether he’s good or evil, the question is, “How can an omnipotent creature be blameless?” This question is raised in different ways by many people and echoed in the media. Everytime Superman saves us from bad guys, he also causes damage. And if he can be everywhere and save everyone, doesn’t that make him directly responsible for everyone he doesn’t save? Or everyone who gets hurt, whether or not he’s even involved?

Lex Luthor says, the greatest lie in America is that power can be blameless.

Batman is upset because Superman accidentally took out his corporate office.

Lex Luthor fuels Batman’s obsession, goading him for a fight.

He stokes the fires by getting Superman invited to a government hearing to listen to the complaints against him, and then using the man accidentally injured by Superman to blow everybody up. At this point, Superman is like, I’m just trying to do good. But the world fears what it doesn’t understand. Batman says (or maybe Lex, I forget) if there’s someone out there with the power to destroy the world, even if there’s only a 1% chance of him doing it, we have to kill them.

Then Lex forces Superman into the fight by kidnapping his mom, Martha (strangely, the plot revolves around both superheroes having mothers with the same name). Batman and Superman fight for awhile. 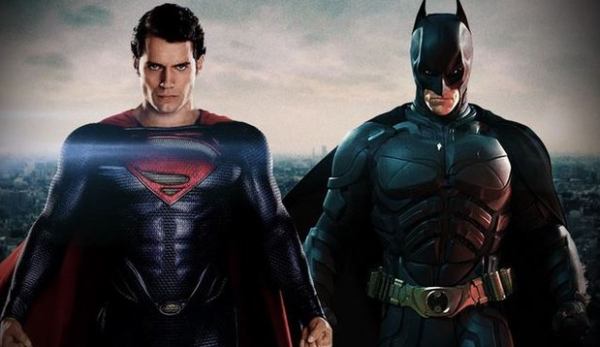 Lex’s motivations are unclear. He wants Superman dead, and he lets something slip that reveals his character. Something about, Knowledge SHOULD BE Power, but it isn’t. He’s pissed because he’s a genius, and he’s after information, and he’s smarter than Superman and Batman combined, but they can still beat him up.

Batman says something pretty similar. Something about, knowing there is someone out there so powerful, makes everyone else feel weak. In other words, Evil and Fear comes from having an all-powerful protector, and we would be better off without one.

Those are very common, human reactions to the face of divinity. It can be comforting and uplifting, if you trust and believe. That’s what Louis keeps telling Superman, when he questions whether he shouldn’t just go away.

Superman actually says, there is no Superman, it’s a myth, a lie… and Louis says, so what, if it gives people hope?

Interestingly, we have an insider’s view of religion here, because, even though Superman is like a god, and even though he’s obvious divine-like in the movie, and even though some people are shown worshiping him in a religious way (bowing down, kissing his hand), we know he’s really just an alien with god-like powers.

So far in the movie, it’s pretty easy to see Superman as God as Batman as The Devil.

The movie makes it even easier by starting off with Batman suspended in a dark corner, the way demons are always portrayed. Batman becomes evil because he can’t stand the inescapable Gaze of Superman. He started branding people, which is basically a death sentence (jury, judge and executioner).

But that identification is probably too simple.

For one, there’s the bizarre extended dream sequence, where Batman is in a post-apocalyptic world, and Superman and his flying black demons control everything, and Batman gets strung up between two others just like Christ crucified, and then Superman rips out his heart. That scene could have dozens of interpretations, but is probably just meant to show that morality is a matter of perspective, in that Batman sees himself as a suffering Christ figure battling against all-powerful evil, and view justifies his murder of Superman (ie, religious belief justifies wrong action).

It gets complicated after Batman fails to defeat Superman. Lex Luthor uses alien technology to create his own monster, an “abomination.” He says, “If man won’t kill God, I’ll create a devil to do it.”

Luthor here is Dr. Faust, representing Promethean pride. He wants knowledge and the power to create, unfettered by moral questions or meddling deities. He needs to kill Superman so he can be free. So he makes a monster, but together, Superman, Batman and Wonder Woman (who is, by far, the most badass Marvel character ever), defeat it.

Superman chooses to play the suffering savior role once again, by flying a Kryptonite sphere into the monster.

(He’s already flown into outspace and gotten nuked, but that wasn’t enough – anyway the government was pretty quick with the kill order to nuke him.)

Superman “dies” and is handed slowly down from the cross – oops I mean the giant hand of the fallen monster, but it may as well have been this painting.

But now that he’s dead, now that “God is Dead” as Lex says, the real fight begins, because “he is hungry, and he will consume everything” or something like that. Lex says the bells have been rung, and something bigger is coming to destroy everyone, evil laughter.

So Batman will have to find the hybrids, the other superhumans out there, and organize them into an army, to fight against whatever new darkness is coming. That’s a pretty neat metaphor for Christianity and the Church, if you’re looking for a Sunday Sermon: Christ’s death was necessary to unify the rest of us, behind the threat of a greater evil.

But it gets more interesting.

If Superman is Jesus, and Batman is humanity (dark and struggling, but worth redemption), who is Lex Luther?

But I think you can also argue that Lex Luther is God.

He wanted Superman to prove to the world that he wasn’t purely good – because you can’t be all powerful and without blame, so he forces Superman to kill Batman, because he knows humanity would never forgive Superman, and never consider him purely good again.

Lex Luther is the one in control, the one who orchestrated all the action. He forced both Batman and Superman into a battle that didn’t have to take place. He unleashed monsters to manipulate humanity’s ethological considerations of two nearly divine figures. It’s a lot like God creating Satan, because he needed someone to kill his son and take the blame, so that he himself could stay blameless.

I know in the Bible, it makes it sound like the devil just fell and it wasn’t God’s fault…but in Paradise Lost, it’s extremely clear that the whole thing was orchestrated deliberately – a huge setup. Lex Luther, like God, manipulated powerful forces into fighting each other, even killing each other, to secure his own power.

The problem with my theory is that Luther gets locked up in the end (like Satan) and has his head shaved (like Samson, interestingly… a symbol of losing his power, a remnant from solar worship). Maybe when Lex’s hair grows back he’ll be powerful again?

Anyway, it’s a messy movie, and they probably aren’t actually trying to make one specific statement.
Marvel is probably just saying, “Hey, here’s all this deep, spiritual, religious shit. Suck on that, nerds.”