If God was going to end the world ala Camping’s May 21 2011 scenario, which time zone would he start in? It’s already 1:20am here in Taiwan – which means the 21st has gone without so much as a storm or earthquake (both of which are common here).

So for those of you in the US or Canada who are just waking up – spoiler alert – nothing special happens today.

Eternal Earthbound Pets is a business that offered to pick up and take care of “Left Behind” pets once their Christian owners were raptured. Ridiculously clever. On the one hand, it’s a silly, mocking gest; but on the other hand, they saw and filled a very real, very emotional need for people – hence it’s a workable business model and they probably made some money ($135 to take care of your pet if you’re raptured anytime in the next ten years). 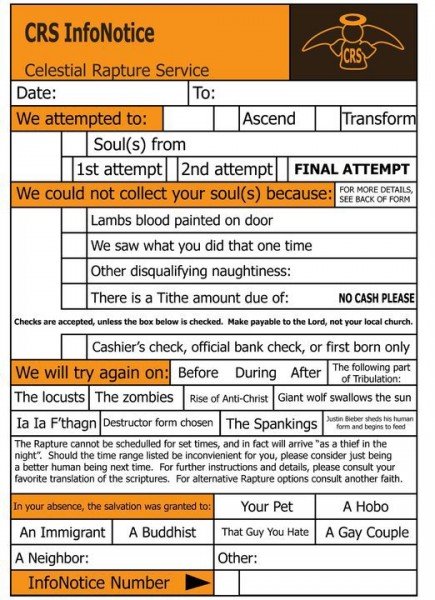 Unfortunately, no rapture means school as usual Monday morning so I have to finish a presentation on Salman Rushdie and postcolonial studies.

Why nothing happened on May 21st

Well, actually a lot of things happened. You could say that everything happened, just as life always continues to happen. The fact that supernatural events did not intercede into our humdrum lives is not really a disproof of God or religious beliefs (in the philosophical sense); but it should make us question the palpable amount of blatant mythological-fairy-tale-embellishments most religions have allowed to become the core story of their faiths.

The fact is that earth shattering, physics-defying miracles DON’T happen – even though a majority of humanity continues to believe that they used to, or did once, or CAN happen, or WILL definitely happen again. There are all sorts of subtle, psychological influences that spirituality affect on a person, but walking-on-water magic miracles are and never have been “real” (they were most likely either fanciful stories, or deliberate technical manipulations by priests/magicians).

When  will the REAL Rapture happen?

It won’t be long before a “newly calculated” date pops up for the “real” rapture. And that, too, shall pass. But as I’ve mentioned previously, the vital danger in keeping our eye on the exit date and the imminent, unavoidable apocalyptic doom is that we will miss the chance to stop the entirely avoidable self-destruction of our species – although I’m inclined to think we are already too late. I do believe we are in the end of times, that catastrophic destruction is upon us… but WE have caused it, continue to cause it, and still have the audacity to blame it all on God!