Hurrah. After years of searching for it – in exactly the place that it is supposed to be – the evangelical search team named “Noah’s Ark Ministries International,” a Hong Kong-based documentary outfit, has discovered Noah’s Ark on Mt. Ararat in Eastern Turkey.

Kind of. In fact, they found a large wooden structure at about 13,000 feet, mostly buried under ice. It MUST be the ark, rather than anything else, they reason, because no human settlement has ever been found that high. They conclude that they are 99.9% sure that this is the boat God commanded Noah to build, which saved all of the animals from God’s wrath. (By the way – WTF? God wants to destroy humanity, so he floods the earth, but he doesn’t have a failsafe plan to protect all his other creatures, so he decides to spare one family so they can save his own creation from his own destruction? That’s some messed up planning.)

At any rate – besides the fact that the group is named after the ark, are Evangelicals, are specifically trying to find the ark (if they’d have found anything else up there, that might have been the ark, too) there seems to be a horrendous gap in adequate research standards on this expedition.

Moreover, proving that this thing is the ark should be all-too-easy. They say they carbon tested it to about 4800 years (although, some scientists have challenged that dating, and other tests put it at only 1,400 years ago – click here for that story).

They’ve also found small, wooden compartments (pictured below) which “could have been used to harbor animals”. There’s a great video of the team exploring – click here to watch it – and it really is a neat site, with lots of wood.

For it to be the ark, however, I’d like them to go into these little wooden compartments and scrape the floorboards for the impressive amount of hair and shit that you’d expect to find after keeping animals locked up for a long sea voyage. This biological matter could be DNA tested and wala – we’d know the species of animal (and the sex – to see if there really were a pair of each). This kind of test should be obvious, and easy to do.

Hell – if you looked long enough, you could find some human debris in there as well (next to the as yet undiscovered steering wheel?). We could bring back Noah through cloning. Now that would be a newsworthy feat.

They should also check the surrounding area to find the site where, after Noah reaches land again, he burns some of the animals that God commanded him to save in a ‘sweet-smelling burnt offering’ that God enjoyed. 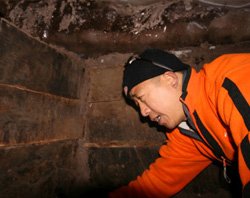 This is certainly an interesting and magnificent discovery – however claiming that it is a magical boat, which rose to impossible levels because God flooded the earth (despite all evidence to the contrary) a long time ago, and not a fortified city, town or military complex (what better place than high in the mountains?) is nothing short of quackery.

Unfortunately – the team probably knows exactly what it is doing. There are many quacks among us. The Turkish government is eager to support the claim (they too believe it is Noah’s ark) because it will bring in millions of religion-tourists annually, significantly bumping up tourism and the economy. They’re also trying to get it made into a UNESCO World Heritage site. Not a bad idea – and definitely possible. But somebody besides the nuts is going to have to take a good look around and find out what it really is.