Today I watched the fourth episode of Falling Skies, a new series created by Robert Rodat and movie legend Stephen Spielberg. I’d already been intrigued by the character “Lourdes” played by Seychelle Gabriel, who talks about how her faith is “stronger than ever” and the importance of prayer, giving thanks, etc. In episode four, she leads a group prayer, concluding with the Catholic/Episcopalian creed, “in the name of the Father, the Son and the Holy Spirit”.

So what exactly is going on here?

We have to keep in mind that Spielberg regularly throws in religious characters, who add to the complex characters interactions. And the plot of Falling Skies (Alien Invasion) is not all that different from “The Mist” (2008) – in which Marcia Gay Harden uses the social chaos to become a spiritual leader/total-freaking-psycho-nutjob. The difference so far is that Seychelle Gabriel is young, cute and naive; but in episode four many of the older, wiser, main characters seemed to join in and support her, urging her to “say something else” and lead them in prayer.

Are people more likely to be religious when faced with tragedy? Yes. Religion feeds off fear and social upheaval. No doubt an alien invasion would cause a flourish of passionate cult-joining and prophet leaders. I expect we’ll see Seychelle Gabriel continue and become a kind of religious leader, opposing some of the other characters with her God-language and small army of faithful followers (at least I hope so. If she’s only there to bring an unnecessary Christianizing element to Falling Skies, I’m going to stop watching).

Jesus vs. The Aliens

The thing that really gets me though is this: With the current lack of proof and mystery of the universe, it’s not completely irrational to believe in God, Jesus, etc. Having Faith, Giving Thanks may be beneficial for morale, society and community. But when an alien race attacks the earth and basically wins, destroying human civilizations, how can people continue to believe in God? Did God not know about the aliens? Is he only the God of this world? Can he not protect his planet, his most cherished species, from extinction?

These questions are always asked when bad things happen – but doesn’t an entire other species with more advanced technology kind of blow Christianity out of the water? (God gives his son Jesus to save humanity… but isn’t bothered to tell us that we are not alone, that we’ll be annihilated, and that he isn’t going to do anything about it?)

Also – while all the other characters in Falling Skies are out doing important stuff, “Lourdes” stands around praying over the lost children. Do her prayers help them? she is asked. “They help me” she says… so praying helps her feel more comfortable; and that’s probably true. And she can share her faith with everybody else and make them all feel more comfortable as well. But no amount of faith is going to get the children back or defeat the aliens – prayer has nothing to do with what actually happens; the heroes of Falling Skies are the young fighters who are out kicking alien ass and gathering supplies while the religious folks stay at home and talk to God.

So which are you? Are you praying for a better world, or are you out physically contributing?

What do you think of Falling Skies? Do you think religion can survive an alien invasion? 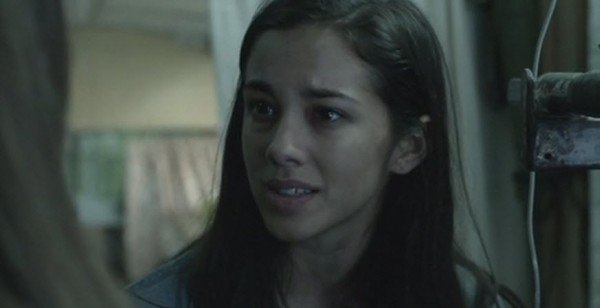 I lost interest in Falling Skies but download an episode when I’ve got nothing better to watch.

But wait a minute – in Season Two, Episode 7, Lourdes loses her boyfriend. Suddenly it’s not all Jesus and Angels anymore. Now she says bitterly:

Talking won’t change a damn thing. It doesn’t matter if you have a good attitude or a bad one, or if you’re an honest person or moral. It doesn’t matter who you are or what you do, sooner or later something terrible is going to happen to you.

She says it with righteous conviction and immaturity. Somehow her blind negativity is as bad as her blind faith. Maybe religious people simply let their moods and beliefs shadow their existence to such an existent that they’re never present in their actual reality, but only in their own dreams and nightmares.

Her faith has been put to the test, and apparently lost. Where was God? Nowhere. Not before, not now, not ever.

No wonder she’s bitter. But unlike the other characters who weren’t strong believers in the beginning anyway, and are content with small victories or small hopes – like the hope to get to Charleston and eat some crab and drink some cognac, there is nothing that can replace the void that God used to fill for Lourdes.