The Grey (2011, starring Liam Neeson) is, on the surface, a man versus nature survivalist story about a group of man facing the elements and a pack of vicious wolves in the aftermath of a plane crash. However, this background is really just a platform to explore the movie’s true theme: dignity in the face of death, and whether or not religion is helpful to ease the transition.

On the one hand, given that the protagonist and champion of the film is an atheist whose ordeals confirm rather than challenge his lack of faith, the Grey appears to be an intriguingly atheistic film – one of the only films I’m aware of where atheism is portrayed as a just and worthy choice. On the other hand, a Christianizing theological interpretation of the movie is also possible (it’s a stretch, but it can be made). This post will seek to untangle both readings.

After the crash, one of the few surviving characters asks, “how could we survive the plane crash if it wasn’t meant to be… ordained.”

“Ordained by who?” comes the response. “Nah, just blind luck. Fate doesn’t give a fuck. Dead is dead. Where do you think those boys are now…in heaven? Getting fit for wings? I’ll tell you where they are. They’re nowhere. They’re gone.”

“I do. Wish I didn’t. Really wish I could believe in that stuff. This is real. The cold. The air in my lungs. those bastards out there in the dark stalking us. it’s this world….”

At this point we get some evangelizing: 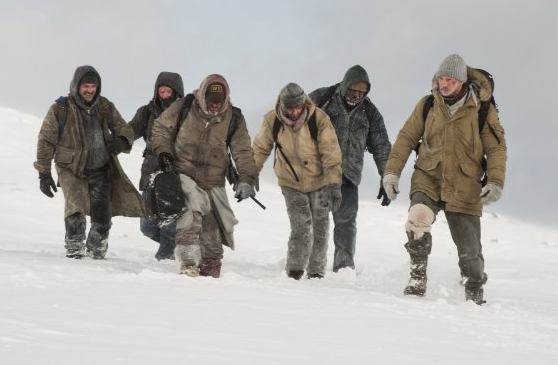 “What about your faith?”

To which the protagonist responds, “What about it?”

The central theme revolves around a poem verse that becomes increasingly meaningful:

All of them die off, one by one, but are greeted by loved ones (or at least think they are.)

You would think this movie would end, like so many others have before it, with the main character suddenly being saved by some miraculous convergence of events that restores his lost faith (aka Mel Gibson’s “Signs”). Instead, when the hero is at his lowest point, and actually does turn to God for help in a moment of weakness, when he demands that God earn faith, he’s met with silence:

Do something, you phony prick, you fraudulent mother fucker. come, PROVE it. Fuckface, earn it. Show me something real. I need it now, show me NOW and I’ll believe in you until the day I  die, I swear, I’m calling on you, I’m calling on you.. Fuck it, I’ll do it myself.

Christians might say this is his cardinal sin or hubris – he believes that God has to make the first move. He needs to see evidence of God BEFORE God helps him, which would violate his free choice to believe; God can’t help him until after he decides, without evidence, to believe anyway.

And yet, nearly all of the early fathers of Judaism and Christianity, Moses, Jacob, etc – they all demand that God give them benefit before they follow him – in fact God approaches them first with increasingly large promises: I’ll make you my chosen people, I’ll give you a land and your sons will live forever. God needs to buy the allegiance of his first converts, because he’s a new comer in a saturated market. Increasingly, he begins to demand more and more of the Israelites, giving less and less in return. Fast forward a few thousand years, and now God is completely absent. He won’t save you when you’re dying in the woods whether or not you believe in him (all of the characters in the movie that had faith, died earlier. Where was God?) The one character who survives the longest does so on the basis of his own strength and courage. He survives because he’s defiant. The other characters can’t believe this is really happening; they have to fit their current experience into a lifetime of faith and belief. They hope and expect that this is a misunderstanding, or a test. They can’t believe that God would abandon them.

The atheist, meanwhile, who has lost all faith in life after his wife died (was taken from him?) and was ready to kill himself just before the crash (symbolically disrupted by a wolf – the same creature who later takes his life?) has no illusions to distract him. He focuses on the here and now. He appreciates the necessity of the fray. Life is a brutish battle. Only the strong survive.