Jesus Mary and Joseph. I’ve just watched the Imaginarium of Dr. Parnassus. I had to press pause several times to take notes; it’s a goldmine of meaningful symbolism, begging for a theological interpretation. On the one hand, there are standard, almost boring, Christian themes: The Devil in black, with a mustache, making bets and tempting souls – even handing out apples to nuns, for Christ’s sake. But on the other hand there are some deep, fascinating revelations that actually undermine (or enhance, depending on your view) the Christian religion, as well as some complex postmodern themes which I simply have to explore.

So in the beginning, there’s a cool temple. Monks are telling a story to sustain the universe. Some black rider comes in and silences everybody with a funky machine. Everybody is terrified, but nothing happens. He’s trying to prove that the monk’s faith is in vain; the universe doesn’t stop or disappear when they stop chanting the story!

But the head monk says, it doesn’t matter. I get it. Somewhere, someone is telling a story, and that story is generating the universe. In other words the universe is meaningless without us giving meaning to it, which is our purpose. As long as there is some religion/myth/ meaningful manifold being placed on it, as long as someone is ENJOYING it somehow, then the universe continues.

“Interesting hypothesis. Are you a betting man?” The devil’s argument: the necessities of fear, danger, fabled bliss of ignorance. The monk’s: the power of imagination to transform and illuminate our lives. The monk won. He becomes Dr. Parnassus, rewarded with eternal life, however he discovers, “He tricked me, he knew that times would change, that someday, no one would want my stories.”

Then the story gets complicated. There appears, hanging from a bridge, a man who turns out to be a con-man (Heath Ledger). He’s great at selling, and turns Dr. Parnassus’ busted up old show into a shiny money-maker. Together with Parnassus’ amazing ability to let people roam around in his mind, they can offer people the chance to live out their dreams. Eventually they are presented with a choice. One “Evil” and one “Good”. The on-going bet between Parnassus and the Devil, is to collect the souls of the people by the choices they make. The universe/game keeps going, as each tries to convince the other that people are good or evil, respectively. Hence, Parnassus is a representation of God, perhaps.

At the same time, the plot keeps getting furthered by bits of newspaper that get ‘accidentally’ blown into the hands of the characters at critical moments with critical information; I can’t help wonder what subtle power this is, secretly behind the entire game.

Eventually, Satan appears to have taken Valentina (Parnassus’ daughter, and the super hot Lily Cole) prisoner, because Parnassus had bet her to keep playing the game. Satan says he can get her back, if he helps kill Tony – the hanged man with magical markings; Parnassus does trick him and get him hanged. We never find out who he was, or why the devil wanted to kill him. Valentina goes free and has a happy life.

Some biblical parallels: in a sense, you could say that God “bet” his only son that the humans wouldn’t eat the fruit. If they did, he knew he’d have to sacrifice his only son; which he later has to do, because he they do eat the fruit. But at the same time, losing the bet, killing his son is the only way to save his daughter (God’s daughter, Jesus lover/consort/other half, is the collective female church or the fallen sophia/wisdom. As Jesus is crucified, the divine spark gets lost in the world, unknown.)

Finally, the monk goes back to selling ‘imagination’ by giving kids a toy so kids will play, and Satan keeps trying to kill it with an apple (apple=temptation, eating the apple is the ‘tree of knowledge; your eyes are opened and you know it’s all impossible, it doesn’t make any sense, you question and everything good disappears, everything you thought you had, until you have NOTHING.) God= imagination creator, which humans NEED to sustain happiness/meaning. Satan=realism. ‘Truth’? No, there isn’t any truth. Satan is constantly TEMPTING those with imagination into making ‘bets’, to see if their stories can stand the test of reason. They can’t, of course they can’t, but you still need to keep pretending! You have to avoid the temptation of rational, logical inquiry in order to maintain the illusion of meaning in the world, the illusion of love, of happiness, of ‘good’, of ‘justice’, or else all life is barren and empty.

Some unanswered questions: Who’s the little guy who keeps the Dr. on task and creating, telling him to ‘get back to work’? He’s also eternal… helping the story be told. An Angel? Maybe he’s really God. And who is Tony, really – pretending to FEED the children but actually selling their body parts? He can’t quit be a Christ figure; but if he’s evil, why is Satan so eager to kill him? I think he must secretly be something good or important but has forgotten. He could be the AntiChrist or something but again, Satan is eager, really eager, to get him away from Dr. Parnassus. That’s why I guess he’s his lost son or something, or a mirror figure of his daughter. 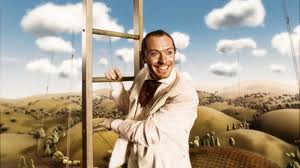 I loved this movie even more when I found out that, tragically, Heath Ledger died in the middle of its production, and three of his good friend, Johnny Depp, Jude Law and Colin Farrell stepped in to complete the movie; and donated their earnings to Heath’s family. Such a beautiful, brilliant thing for them to do.