You may have heard the claim “Santa Claus is Satanic” before from fundamentalist Christians seeking to preserve the true meaning of Christmas (i.e. “Jesus is the Reason for the Season”), who view Christmas as a celebration of Jesus Christ’s birthdays and can’t figure out for the life of them why we focus more on a fat guy in a red suit and white beard, who flies around the world on magical sleigh pulled by flying reindeer giving good cheer and presents. Like anything else unexplained, Christians are quick to blame Satan (especially for figures as obviously pagan and magical as Santa). In other words, if it’s not in the Bible, it must be Satanic. But actually, they are right. Santa Claus IS Satan – in that both figures developed out of common mythology, and both figures are used as control mechanisms for obedient moral behavior. This article will explore these claims.

First of, there is similarity between them: Both dress in red clothes. Satan has horns and Santa’s reindeer have horns. Both have facial hair. And hey, since Christmas is supposed to be about Jesus and yet pictures of Santa are much more abundant, the whole Santa thing simply must be Satan’s attempt to steal attention away from the Son of God. Right? I mean, heck, even their names are so similar it practically invites confusion. 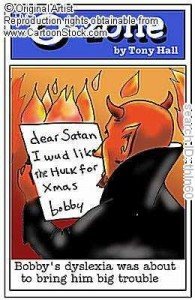 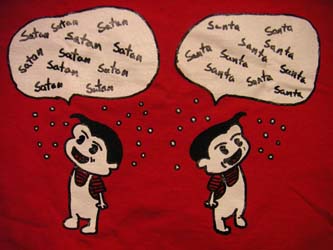 But actually there’s more to it than that. Although Santa Claus is supposed to be a derivative of “Jolly Old St. Nicholas”  (a fourth century saint of Myra known for gift giving, whose bones miraculously exude a clear watery liquid which smells like rose water called manna or myrrh which is believed by the faithful to possess miraculous powers) the image of Santa Claus is really based on Father Time; shown always with a white beard, scythe and hourglass. Father Time is also the basis for the Grim Reaper, who uses the scythe to collect dead souls. But all of these figures can clearly be traced back to Chronus or Saturn, the oldest of the gods, whose annual festival (Saturnalia) was a time of celebration, visits to friends, and gift-giving. During Saturnalia, slaves would be treated like masters, fir trees brought indoors and decorated, songs sung and candles lit.

Aha – so the “spirit of Christmas” has nothing to do with the birth of a savior after all; this special time was already celebrated for centuries before Jesus. And “Santa Claus” with his beard, robe and sleigh, is almost the exact same as Chronus, (except that his sleigh is pulled by reindeer instead of snakes.) 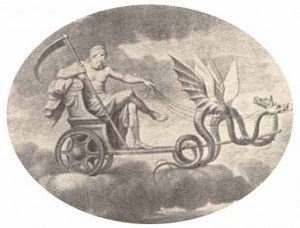 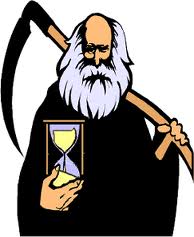 Is there anything Satanic about Santa? Think about what does Santa really represents. Santa Claus is an omniscient being who is always watching you. He’s making a list and checking it twice, he’s gonna find out if you’re naughty or nice. And what happens if you’re naughty? No presents for Christmas! Santa Claus is a tool to get kids to behave, even when you aren’t with them. He is the invisible eye in the sky that rewards or punishes your unwitnessed actions. He is God for kids. In many other cultures, with less sensitive young ones, children are told that devils or demons will cut them up into pieces and eat them if they are bad, rip out their tongue if they lie, and force them to eat all of the food they leave on their plate in hell. In the west, “Hell” is the terror technique used on adults. “Satan” is God’s evil face that will terrify you enough to be good. But what terrifies a spoiled modern consumptionist child more than anything else in the world? No presents. 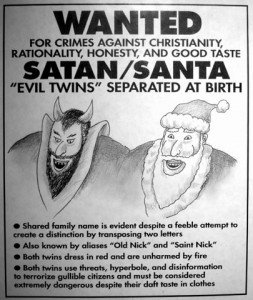 Satan/Santa are society’s highest form of Scare Tactic. Santa is jolly, happy and magical, but he only likes good kids. If you don’t behave, you’ll just get coal in your stalking. If you’re good, he can fulfill anything you desire. He is both rewarder and withholder. God is just like Santa except he hates you more. While Santa will simply pass over your house, indifferent to your needs and wants, God has created a special place of misery and suffering, and made a horrifying monster (Satan) to torment you forever. He doesn’t even care enough about you to take responsibility for this punishment; he lets you believe that Satan is the evil one, who wants to steal you away for some sick pleasure, and that God is actively trying to save you.

Children ask Santa Claus for presents, and their parents buy the presents; thus justifying and supporting the childrens’ belief in Santa (which, they will find out later, was a cruel lie to get them to behave). The parents, meanwhile, ask God for presents, yet he rarely delivers and there is no one else up there to bring them to us. If it were just up to God, he should be able to give us anything we want – the fact that he doesn’t would quickly dissipate our belief in Him. Thus, the theology needs more complexity. God does not have complete power, he is opposed by Satan, who tempts us, and if we are not good (which in fact it is impossible for us to be) then God has no choice but to “pass over” our house. All we can do is tell Santa/God that we tried to be good, and hope he takes pity on us.

For some brilliant historical research about Santa Claus (if you can overlook the contradictory claims of its zealous evangelism) check out this page.