Satan is my Hero

Evil be my Good will be a popular non-fiction research work centering on Promethean courage as a means to restore the pre-Christian ethical system of heroism and the virtues of blasphemy – that is, standing up to God and refusing his authority – thereby justifying the Romantic reading of Satan as the real hero of Paradise Lost (and the entire Christian epic.)

(I’ve changed the name; although less precise, I’ve learned enough about publishing to know I don’t want to alienate readers before they even start reading).

I’m planning to finish the intro, first 2 chapters and book proposal this winter, hook a few celeb blurbs, and get published! With any luck it will be out in 2014. Want to be a beta reader and get a free review copy? Leave your email in the box below and I’ll fill you in on the details once the book is ready. 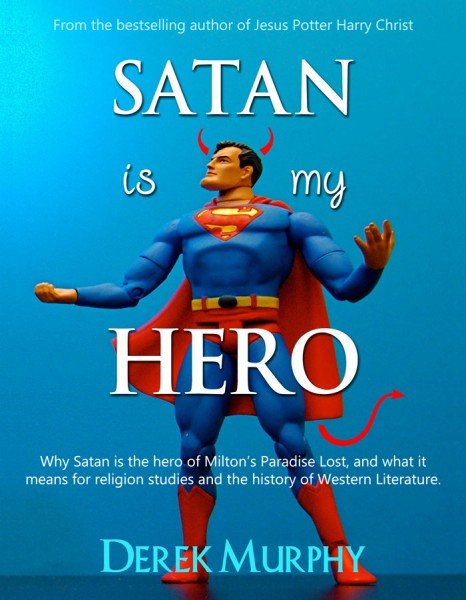 The New Art, which I love

So I rebranded to this cover, using the Guy Fawkes mask, because Guy Fawkes and the Gunpowder Plot was critical in shaping Young Milton, and the symbol has become a globally recognized representation of revolution.

The lines between revolutionary and terrorist are often blurred; heroes and villains depend on sides, not actions.

(Below is some of the academic content I’ve been writing for my PhD Thesis, but I’ll need to tone this book down to make it interesting and accessible).

The view that Milton’s literary character of Satan is a tragic hero conforming to the literary styles of epic literature, while immediately present on the surface of the text and in sync with Milton’s own political values, has been so badly disparaged by nearly a century of Christian theorists like C.S. Lewis and Stanley Fish that it continues to be dismissed by literary theorists. The true secret of the religious “rebranding” of Milton’s Paradise Lost however, is the raw power that an unleashed re-reading of Satan would bring. This is because Satan is not only a fictional character in a 17th century epic poem – he’s also the center and foundation of Christian ethics. He’s been charged without trial and imprisoned, and his fall and punishment is the defining myth that allows evil to exist in the world while absolving God of any wrongdoing. Consequently, the claim that Satan is the hero of Paradise Lost is also the claim that Satan is the secret hero of the entire Christian epic, and reveals one of the greatest ethical inversions in human history.

Satan is my Hero will show that the fall of Satan was foreknown and inevitable, and his eternal punishment therefore unjust. It will demonstrate that his continuing attempts to seek justice and a fair trial are no different from Job’s: both characters have faith in an absolute sense of fair play and the righteousness of standing up for oneself when wronged or falsely accused. Moreover, it will argue that the fact Satan had the courage to stand up to the omnipotent God, rather than a sin of hubris or pride, is actually a bold claim of individual autonomy, and hence a prime example of the site of freedom and the necessity of self governance; values which are championed by all forms of Western contemporary society and culture. In this regard, Satan can be compared to the heroes of modern media – the rebels, intransigents, and revolutionaries. These are figures who refuse to bend their knee and speak against tyranny and injustice at all costs. They are even willing to sacrifice their own lives to attain it; convinced of the inherent value of absolute freedom.

Satan is my Hero will argue that seeing Satan as the hero of the Christian epic is completely normative and in agreement with our highest-regarded theorists and philosophers; identifying Satan in particular with Badiou’s concept of Promethean Courage and Zizek’s praise of revolution and terrorism. Finally it will attempt to demonstrate that not only are Christian ethics inherently impossible, but that they are also in conflict with basic humanitarianism. Real ethics are Satanic; that is they are constrained within the boundaries of this world without looking for an external source or post-mortem confirmation. It is only the continuing pollution of Christian ethics that inverse traditional values of heroism and bravery in favor of the virtues of humility, weakness and misery; obscuring the majesty and relevance of the figure of Satan.

History of the Debate

Milton’s epic poem, Paradise Lost (1667), was originally interpreted as in line with traditional Christian themes; a moral piece of literature with the final conclusion that Satan (and man) must submit to the absolute authority of God. Near the end of the 18th century, William Blake challenged this view, relating Milton’s personification of Satan to Prometheus as a creature of nobility, righteously seeking justice and freedom. Later humanists followed Blake in claiming that Milton, as a poet, deliberately or unconsciously created in Satan a heroic character that demands sympathy for his deterministic pursuit of autonomy in the face of an absolute power. The nature of the problem was recorded elegantly by Bloom:

Milton’s God is out of balance because Satan is so magnificently flawed in presentation, and to account for the failure of God as a dramatic character the reader is compelled to enter upon the most famous and vexing of critical problems concerning Paradise Lost, the satanic controversy itself. Is Satan in some sense heroic, or is he merely a fool?

These “Satanic” understandings of the text were challenged in the 20th century by a resurgence of religious interpretations – from Charles Williams, C.S. Lewis and most recently, Stanley Fish. Rather than a straight reading of the text, these theoretical manipulations warn against “falling into the trap” of a “false” reading, and argue that Milton’s writing is meant as a temptation or challenge for the faithful, which must be met with caution and distrust.

Might we not grant that Milton’s text is unclear? This is at odds with what most readers recognize as Milton’s prodigious control over his material, but perhaps the epiphany on the pinnacle of the temple is meant to be puzzling. Perhaps Milton’s praxis is in the service of a theory which aims to point out certain expressive and cognitive limits. (McMurray, 262)

According to C.S. Lewis, the aim of his 1942 preface to Paradise Lost was “preventing the reader from ever raising certain questions.” Stanley Fish argues that Milton has created a program of “reader harassment”; designed to scold unwary readers who allow themselves to be tempted by grand rhetoric of Satan into momentarily pushing aside the “imperative of Christian watchfulness” (Fish).

It is revealing to compare the figure of Satan with Milton’s own biography, in particular his many clashes with the government and the church. Milton is revolutionary, anti-censorship, anti-monarchy, anti-church power, pro-divorce, an Arian heretic, and believed in rule by election and reason and freedom above all else. He ended his life proud, stubborn, blind, jailed (or exiled) and unrepentant. It is hardly possible to read his 1649 Tenure of Kings and Magistrates without making a direct comparison with Satan’s justification of revolution in Paradise Lost: “…it is lawful, and hath been held so in all ages, for any who have the power, to call to account a Tyrant or wicked King, and, after due conviction, to depose and put him to death.”

It is no wonder, therefore, that critics have been quick to dismiss the author himself and warn against relating an author’s personal beliefs to his own writing. “We must constantly be on guard against over-reading any author’s biography or personal character into his works” (Nicolson 186).