I was excited to take a break from writing my thesis tonight to start Season 3 of Sherlock Holmes, “The Empty Hearse.” Since my thesis is focused mainly on Milton, Guy Fawkes and revolutionary terrorism, I was very surprised that the plot of episode one takes place among November 5th events that commemorate the infamous Gunpowder Plot of 1605.

The interesting thing about Guy Fawkes – who has become the de facto symbol of revolutionary action around the world since the making of the movie V for Vendetta, which portrayed him and his plan to destroy parliament as heroic and vital – is that he’s both a hero and a villain, as all revolutionary heroes are.

Generally speaking, lower classes with less to lose are eager to get behind the idea of a clean slate revolution that tears down social borders, financial institutions and governmental law, while upper classes view the same idea with horror.

There are also religious differences – Guy Fawkes was a Catholic terrorist who wanted to blow up the ruling Protestant King, James I, and restore freedom and power to Catholics in England.

To Catholics, Guy Fawkes was a hero. To Protestants, the devil himself. Him and the conspirators were to be drawn backwards to his death, by a horse, his head near the ground. He was to be “put to death halfway between heaven and earth as unworthy of both”. His genitals would be cut off and burnt before his eyes, and his bowels and heart then removed. Then he would be decapitated, and the dismembered parts of his body displayed so that they might become “prey for the fowls of the air.” 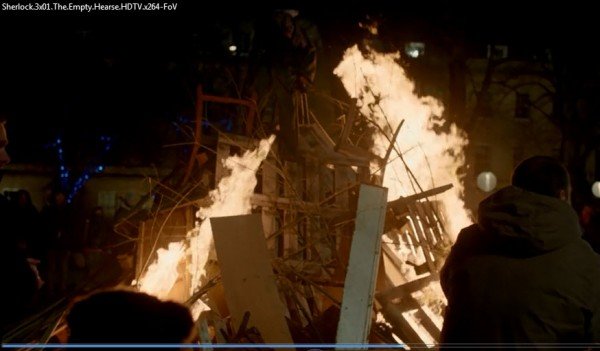 But that wasn’t enough, so hence, every 5th of November, they dress up an effigy of Guy Fawkes to be burned at the stake as an annual feature of English life (which explains the happy families lighting up the bonfire in Episode One, The Empty Hearse, under which John has been hidden and narrowly escapes death.

Interestingly, the whole thing smells of a government conspiracy: evidence against the “traitors” conveniently showed up just in time. A group of the so-called conspirators “accidentally” lit themselves on fire trying to dry out the gunpowder, and the state published a “Real Version” of what happened hastily the same month. The Gunpowder Plot was directly responsible for new anti-Catholic legislation and increased anti-Jesuit hatred; it also increased the King’s claim of divine right to rule.

It was fishy enough that several small books were put out over the next few years, calling the whole thing into question. If you find some credence in the idea that powerful governments allow bad things to happen (like Pearl Harbor or 9-11) to justify war mongering and increased national loyalty, then this doesn’t seem far-fetched.

King James I spent too much money and was dependent on Parliament. His son and successor, Charles I, borrowed so much that Parliament refused – so he dissolved Parliament and ruled without them. He  became an insufferable asshole – a cruel tyrant, using his “divine right of kings” to do whatever he wanted. Even worse, Charles got married to a Catholic. But he still needed money, so eventually he made a new congress – but they immediately demanded he sign them some extra rights before he got his money. He was pissed off at them, so he ruled without Parliament again and tried to get money elsewhere. There was a Scottish revolution, which didn’t go well, and he needed more money… so he reluctantly convened Parliament again.

Things got heated. In 1642 the King burst into Parliament to arrest some members and they resisted. Fearing for his life and his family, he left London and the country descended into civil war. During the war, public sentiment changed quickly, with the help of political writers like John Milton, who wrote a long defense on regicide (the right to revolt, kill the king and self-govern). In 1649, Charles I was tried as a “tyrant, traitor, murderer and public enemy” and publicly beheaded. John Milton helped define and shape the new commonwealth. But only 11 years later, the commonwealth fell apart, and Charles II (who had been in exile) re-established the monarchy. Regicides like Milton were rounded up and executed (although Milton was spared).

What’s this got to do with Americans?

In the span of one lifetime (John Milton’s) a terrorist bomber who had tried to kill a king became a national villain and was executed. One of Milton’s first poems commemorates the event and is called “5th of November.” But then Milton himself wrote political treatises defending the right to self-govern, the right to free speech, the right to rebel, to be lawless, and ultimately to kill a king. When the political climate shifted yet again and he suddenly found himself a wanted outlaw, after dutifully serving the new republic, Milton poured his frustration into his epic poetry – which understandably centered on revolutionary terrorism, but with blurred moral boundaries (in Paradise Lost, Satan is the revolutionary terrorist, but he’s the villain. In Samson Agonistes, Samson is the hero, despite also being a revolutionary terrorist who destroys the building killing everyone inside.)

Milton’s writings had enormous and direct influence on the later French and American revolutions, and several passages in the Declaration of Independence, Bill of Rights, and Constitution closely mirror Milton’s own justifications for political revolution. 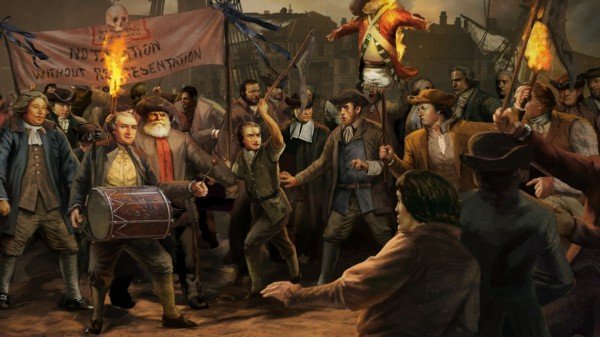 Early American literature championed revolutionary tales such as the Boston Tea Party (even though they were a form of terrorism). Rebels, rule-breakers, outlaws were natural heroes for the budding new nation seeking to throw off the yoke of English rule.

But in the 1950s and 60s, the spread of communism and threat of nuclear war put Americans in a defensive position, and viewed revolutionaries and the rhetoric of communism is “evil.” During the past decade, and especially in the past few years, revolutions have become cool again: the Arab Spring, Occupy Wall Street, Anonymous, Julian Assange and Wikileaks, financial insecurity plus the increasing dissatisfaction with a government we know is lying to us and spying on us, has made revolution easy to swallow.

Getting back to Sherlock Holmes

When you’re dealing with revolutionary terrorists who want to destroy the government and establish a society, it’s hard to say whether they are “good or evil.” It depends who’s telling the story. But Sherlock Holmes is a conservative, orthodox Good Guy. He works with the police and the government. If he were in America during the revolution, as an Englishman it is difficult to say whose side he would take in the violence. Vandalism and revolutionary violence would probably have been crimes he would seek to solve.

In Episode One of the series, he seems firmly on the side of the government. Terrorists are seeking to blow up the Palace of Westminster, from an abandoned underground metro station.

It’s the SAME story as the Guy Fawkes Gunpowder plot; and also the SAME story revisited in the 2005 V for Vendetta movie. Now we’re being fed it again through the lens of Sherlock Holmes. A news anchor says the anti-terrorism bill is going to be a very close vote – highlighting the fact that one man’s terrorist is another’s revolutionary hero. Then there’s a short scene showing the terrorist watching another news report on government spying on its own citizens, an “Orwellian” practice.

Luckily Sherlock Holmes finds a much too convenient “off-switch” and becomes a national hero for thwarting the terrorist bombing. I suspect perhaps, that just as revolutionary TV programs keep Americans happy watching so they don’t need to actually revolt, Sherlock Holmes may be aimed at providing a non-revolutionary modern champion for British citizens… What I like about the series however, is how intelligent it makes its villains: in this conflict, Holmes happens to be anti-violence, but I don’t think he’s emotional emotion to be against violence in general. If a foreign power invaded England (or an alien race) I’m sure he wouldn’t hesitate to using terrorist bombs as a means of liberation violence.

What do you think? Is the law always right? Is revolutionary violence ever justified?