Today on Facebook I found this excellent conversation between a Christian and David G. McAfee, author of “Disproving Christianity and other Secular Writings” and someone who thought Atheists should be banned from government.

Personally, I no longer engage in debates like this because I don’t believe the party on either side is open minded enough to change their views – so it always becomes a shouting match that makes each side more righteous.

But that said, David cleanly makes 3 irrefutable points in response to the religious claims on the left.

(Click on it to zoom in and read in full.) 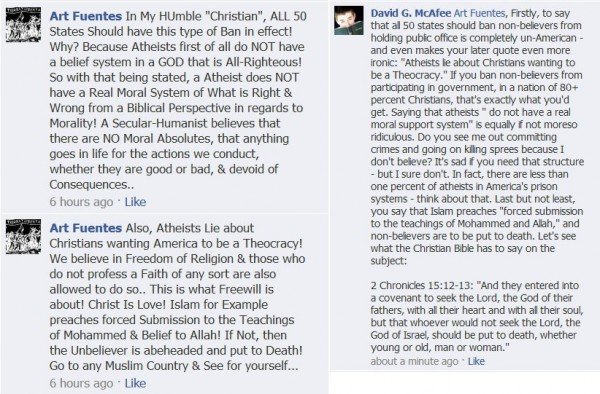 The claims are pretty standard, beginning with…

Atheists have no moral standard

We can’t let atheists into public office because they don’t believe in right and wrong, so they’ll let anything happen.

Christians, on the other hand, have an all-righteous, biblical morality.

But what is it?

The Bible says lots, and lots, of things about what is right and wrong, what is permissible or not, including what we can eat, who we can sleep with, what we should wear, when and how we should pray, etc. If you count up all the rules in the Old Testament, you’ll find that most Christians only follow about 2% of them. The rest are ignored.

From a ‘Biblical perspective’, for Christians, just means that they get to do whatever God decides is right. God is their moral compass. Although, deciphering God’s Laws are the work of his priests, whichever denomination you follow.

You may think that just the belief in a universal right and wrong would make Christians more ethical – but as David points out, Atheists are more likely to abide by the law and be non-violent.

The rules of “right and wrong” also seem to apply only to fellow Christians; non-Christians won’t get treated the same unless they convert.

Furthermore, I’m not sure that “ethical” is a quality I want in my politicians. Politicians are going to have to make very hard decisions. They won’t be fair for everybody. Somebody is going to lose. Part of the reason American politics seem frozen and incapable of solution is because we have too many factions that are always arguing. Somebody needs to win. I want a politician who can make smart choices and tough sacrifices, for the better good of all.

Christians don’t want America to be a theocracy

As David points out, barring Atheists from office will lead to a Christian government. I don’t think there’s a way around that.

Art Fuentes says Christians are super tolerant and everybody is FREE to practice their own religion, because Christ is LOVE! But Christ doesn’t love Atheists, or Muslims. At best they are tolerated, and he desperately wants Christians to go out and convert them. Because otherwise they’ll suffer in Hell forever.

Christianity is a system that believes it has the only answer, and that it has a moral obligation to enthusiastically spread that message.

Although I’m not very political, it would seem that the fairest way to resolve the issue of political representation is to count up the statistics and make sure everybody is fairly represented

(If 5% of Americans are gay, atheist, muslim, vegetarian or whatever else, and effort should be made to make the same percent in government).

But of course, that won’t work at all, because the majority will always win everything, and nothing will ever truly changed, and the minorities will still be overlooked in deference to majority opinions.

As has been pointed out, Christians are not only the majority in America, but seem to be a prerequisite for holding political office:

A few novel solutions to the issue of representation

Personally I’m a big fan of Plato’s “Philosopher-Kings” system. We would have some kind of placement test, not an SAT exactly, but something that would test intelligence, leadership ability, decision-making, philosophical insight and wisdom. We’d have to set some boundaries, like limits to wealth accumulation (a few billion dollars should be enough to satisfy anyone, we don’t need individuals to control hundreds of billions while everyone else has too little), and checks and balances.

Everyone else would find a good meaningful role to play based on their skills and interests. Yes, it’s basically a caste system. Yes, it takes for granted that people are not equal. (I believe in equal opportunity, not equal positions for people unfit to fill them.)

The real problem is that the majority don’t like being manipulated or controlled, and would probably rise up.

I’ve recently read Lev Grossman’s The Magicians, which is basically a sequel to the Narnia series (although with much deeper insights and implications).

The protagonist wonders, why only earth would Narnia (it’s called Fillory in the book; all the names are changed) give political power to people who come in through magical means, but are mostly never around, and who don’t know anything about the place. The reply is that somebody from outside the society, with no opinions, ties, favorites, etc, may actually be most fair:

“Our people have been slaughtering and betraying one another for centuries, Quentin,” she said. “How can you be any worse? The rule of the Chatwins is the last peaceful time anyone can remember. You don’t know anyone here; you have no history, no scores to settle. You belong to no faction.” She stared fixedly at the road ahead of them, biting off her words. The bitterness in her tone was bottomless. “It makes perfect political sense. We have reached the point where ignorance and neglect are the best we can hope for in a ruler.” Grossman, Lev (2009-05-22). The Magicians (p. 317).

That’s a powerful line:  ignorance and neglect. Someone to come in and make some basic rules to protect everybody, but without becoming so meddlesome that they change the laws to favor certain popular uprisings, or give too much control to some groups.

The question should not be “How many Christians vs Atheists in government are a fair number,” but rather “What kind of person can keep the best interests of both Atheists and Christians in mind, without letting their own opinions influence their sense of justice?”

What do you think? Do we need more Atheists in Government? How much more? Why?