The original Snow White myth is already full of esoteric, hermetic symbolism; written to preserve alchemical wisdom during times of persecution. So they could have left the story alone when making the 2012 movie Snow White and the Huntsman.

Instead, somebody in Hollywood decided to stuff  so full of overt, deliberate and obvious Christian symbolism that I feel like I’ve just suffered through a two hour sermon with flashy special effects.

I knew something was off in the beginning of the movie, when Snow White (Kristen Stewart) says the full Lord’s Prayer while locked away in her prison.

The evil queen (Charlize Theron) has taken over the kingdom after seducing her father, and turned the whole land to death and suffering (exactly like the first Narnia movie). She’s a witch, of course, and besides worshiping an idol (a big shiny mirror), she’s also obsessed with her looks (the sin of pride).

What she’s after is Snow White’s heart.

But Snow White escapes through the woods and ends up in a magical, always-spring meadow with 7 dwarves and a handsome hunstman (Chris Hemsworth). 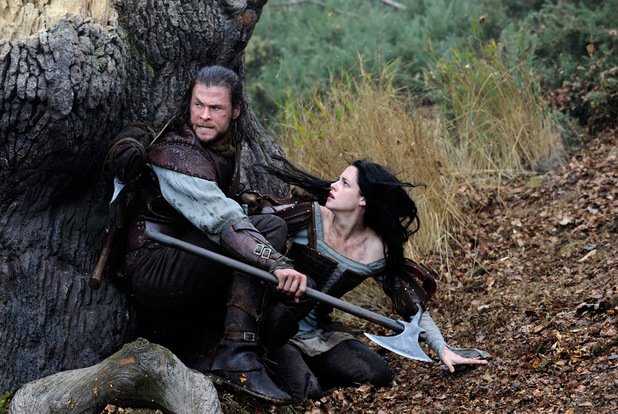 That’s when things get really weird. Suddenly all the animals and fairies gather and lead Snow White towards the sunrise, and a giant tree – in front of which stands (WTF?) a huge white stag with branch-like antlers.

Yes, we’ve seen the white stag in Harry Potter, but it’s also a feature of Narnia: 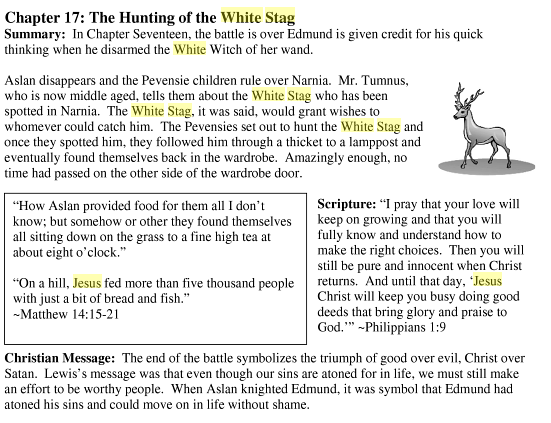 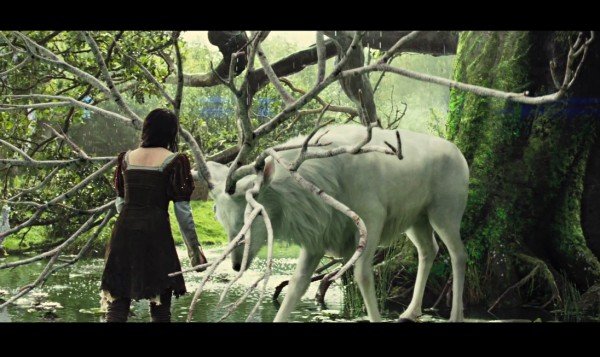 But just then the white stag gets shot by an arrow and – turning into butterflies – ascends into the sky.

Satan fighting for the soul of the blessed

Snow White gets tempted by her lust for her child-hood companion and eats the poisoned apple (succumbs to Sin, the temptation of the female-Satan queen).

She dies… is displayed in the tomb-like cathedral, but then gets revived by the love and suffering of the huntsman.

This is a bit confusing – when Kristen Stewart stumbles out of the church, barefoot, dressed in a white linen garment, calling on her followers to take up their swords and follow her into battle to defeat evil and avenge her Father’s cause – it’s very easy to assume she represents Jesus.

Her motivating speech talks about “we all need to light the fire in our hearts” or something like that; rhetoric that should be very familiar from evangelical churches. It’s kind of a pentecostal moment. “Let ME be your weapon!” she shouts.

Each singular soul has to wage a bloody battle, a fierce war against evil, and each individual soul needs to triumph. Explosions, armies, battles… all so that Snow White can face the queen and say “You can’t have my heart.” (Just in case you didn’t get it, the queen is actually placed within a burning fire, her skin melting off, so that you  know she represents Satan.)

The Huntsman is really Jesus, in an interesting twist. In the original Snow White, she sleeps until her Handsome Prince comes and revives her with a kiss… but in the remake, the handsome prince is the temptation that led to her ruination (= sex with hot guys is bad).

In the end of the movie, Snow White is crowned, all her loved ones are restored (one of the dwarves had died, but he comes back later). Ie, Jesus has the power to restore the dead to life – but not Satan (as was made explicit).

How to spot a Christian Movie

The unfortunate thing about Christian movies is that they keep recycling the same tired symbols. I felt like I was watching Narnia again (did they borrow all the sets and props and costumes?)

Here’s how to spot a Christian movie:

Earlier in the story, right outside the haunted forest lived a community of women who scar their faces and wear burqas, because “their ugliness is their only protection”. Probably included because it looks cool, even though why in the Hell is there this totally foreign culture living inside the same kingdom?

The moral message is “caring about your external appearance makes you easy food for the Devil. Don’t let him consume you!” It seems like the Muslims get to go to heaven also (at least their women – but all their men are off fighting) but Jesus (the huntsman) leads Snow White away from their community anyway… They mean well but they don’t have the right answer, the movie seems to say.

One final thing: the three drops of blood in the beginning and end of the movie are probably a reference to the trinity, or the 3 nails that crucified Jesus (that’s why we have 3 red lines around a candy cane, also). But it could be a reference to virginity, purity, chastity.

Kristen Stewart is able to defeat the queen (by stabbing her in the heart, against all odds, with a blade that came out of nowhere) because she is pure. And “only the pure one has the power to vanquish evil” (I forget the exact quote from the movie, except that it reminded me of the book of Revelations description of the unblemished lamb that has the power to open the book with 7 seals.)

The only thing I was totally expecting was for Snow White to smash the false idol of the magic mirror. I was sure she was going to do it. But she doesn’t.

What did you think? Am I reading too much into it? Did you like the movie?