If you need a mystery to solve itself by wrapping up all loose ends, you might not like Sound of my Voice, the new movie directed by Britt Marling, who also plays the main role as Maggie — a time traveler from the future sent back to save the ones she loves from the coming economic and ecological collapse.

The plot follows Lorna and Peter, a young couple determined to do something important with their lives, as they infiltrate the cult and try  to record video of Maggie. First they have to learn the rules, the complex secret handshake, and ‘train’ in an isolated location, before finally being allowed to meet the enigmatic time-traveler. 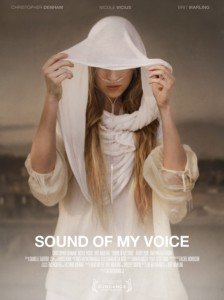 But as Maggie winds her powerful personality deeper and deeper into the psyche of both Peter and Lorna, and eventually drives them apart, they start to question. Is she a fraud? Is she lying? Or is she really who she says she is?

Maggie has cult leadership down pat – she gives then she takes, praises then insults. She can be cold and mean, but then loving and forgiving. When asked a direct question about herself or the future she comes from, she stalls, evades, reacts in anger, or kicks you out of the group.

Interestingly, this is exactly the behavior Jesus shows in the four gospels, and later Paul after him. Knowing that cult leaders use these powerful psychological manipulations to confuse their followers and bind their loyalty, it should surprise us that Jesus or Paul need to use such tricks. Ah – but Jesus and Paul really offered proof by way of their miracles and displays of power and healing.

Likewise, Sound of my Voice builds up to a shocking and unexpected conclusion.

Maggie wants Peter to bring him a specific girl from his class; a girl we’ve already had our attention drawn to. Maggie says the girl is her mother. Meanwhile, Lorna is approached by the Justice Department, who have photos of Maggie proving she’s a liar and a criminal, wanted for arrest. Knowing that Peter is in too deep, Lorna agrees to a sting operation to bring Maggie down.

Peter sets up the meeting, drawing Maggie out, and she and the little girl meet for the first time.

Peter is stunned as he watches Maggie and the girl perform the highly complex secret handshake that cult members have been using since the beginning of the movie.

“How did you know my secret handshake?” the girl asks.

“You taught it to me.” Maggie answers. 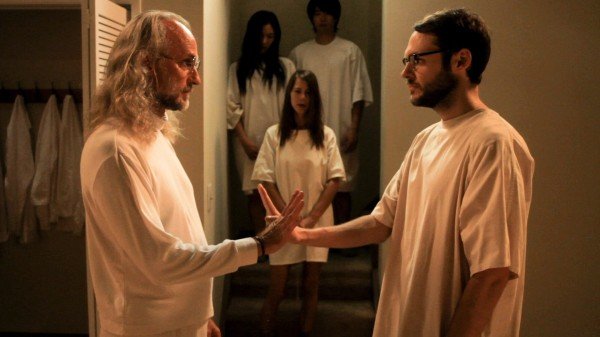 So suddenly – bam! Real proof that Maggie is from the future. A genuine miracle. Peter is an instant believer.

It doesn’t matter that the Justice Department has photos and a rap sheet for Maggie. This miracle, because it supersedes rationality, logic, and everything else we know about physics, cancels out everything else.

We have a reality with too much proof; with two possible realities that seem equally valid; two explanations that fit all the facts.

Maggie is a con artist, or Maggie is from the future and came back to save her loved ones.

The movie ends with Peter hearing Maggie’s voice in his head (like Jesus, earlier she promised her followers that they would hear her voice even after she’s gone):

Maggie can’t force them to believe. She can only lead the way. She can’t “PROVE” that she is who she says she is. They have to believe it. No amount of evidence will convince them unless they decide to believe, or disbelieve.

The majority of reactions to the movie say it is frustrating, infuriating, lacked answers — viewers feel they deserve a story that makes sense and comes out to one logical answer; an ending where everything is wrapped up. But instead we get the true cult experience in the only way we can: we are invited to see absolutely convincing evidence for both sides of the story. We are convinced. Our logical brain is left comparing the evidence, fighting with itself to maintain order.

Who cares that time-travel is impossible or unlikely: what other explanation can there be for what we’ve seen? There must be an explanation, even if it is impossible. Cults generate self-confirming experiences that are impregnable to standard reason; they get us arguing with ourselves. They teach us to let go of our need to be in control, to think, to figure things out, and just to accept that some things are beyond our ability to comprehend.

And once we’ve accepted that, everything else is easy.

We don’t need to explain Maggie’s historical run-ins with the law, the photos, the past crimes. It doesn’t matter that both realities can’t be true. If time travel is possible, so is anything else. (The same goes for walking on water or turning water into wine).

All a cult needs to thrive is a charismatic, mysterious leader with a good story to tell, and the appearance of a logic-defying miracle. Maybe that’s why Jesus did so many – he knew that at least some of them would be figured out or seen through. He knew that some would be doubted. So he healed the sick, he fed the crowds, and finally he rose from the dead. That way, even though his message is confusing and unsatisfying, even though his teachings are mostly obvious shadows of mystery cult wisdom, even though his plan for salvation and relationship to God took centuries of theological bullshit to evolve, simply by trying to plug all the holes Jesus left when he cobbled it together, none of that matters because Jesus Destroyed Logic through his miraculous acts.

Faith will save you. Reason and Logic is God’s joke to fool the proud and the educated. It’s a mystery. There are some things you can’t understand. You need to let go and believe…

This is the language of a cult. And a cult is simply what every organized religion was in the beginning, before it grew large enough to become respectable.