In the news today was the story of a 780-year-old treasure honoring St. Anthony of Padua that was stolen from a Southern California Catholic church. The relic, which is normally kept under lock and key, was brought out by the Rev. Jose Magana because “he thought it might help his parishioners regain their faith during the difficult economic climate.” 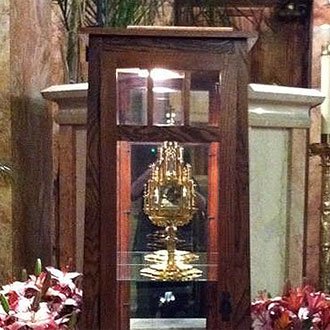 This story tickles my funny bone for various reason:

First is the fact that a Reverend thought he could inspire hope and faith in parishioners who were facing economic hardship by displaying an opulent chunk of Church Gold. (Hard times? Lost your job? Don’t worry – GOD is still as rich as ever, see?).

Second, is the fact that the relic – which is most likely an ancient bit of skin, hair, fingernail or bone purported to be a piece of St. Anthony’s corpse, in the tradition of Catholic magical superstition – is housed in a 16inch frame of gold and silver. This gold and silver was most likely taxed quite violently from the poor, who were exploited to raise funds for the church’s noble endeavors, like the crusades. So rather than giving parishioners hope, this is more like saying “who cares about your financial troubles? You should be giving all your money to the Church anyway instead of whining.”

Third, St. Anthony of Padua is the patron saint of lost causes and missing objects! So on the one hand, the faithful should be praying to St. Anthony for the quick return of his own relic… which begs the question: can prayer, relics, or saints actually do anything at all? (If he can’t find or protect his own goddamn relic, do you think he’ll help you find your car keys?)

Fourth, rather than actually doing anything to help his frustrated parishioners, Rev. Jose Magana thought a display of opulent waste would fix everything. (Instead of melting the icon down, or auctioning it off, and feeding thousands of poor people, or dividing the money up among the people who spend time praying (and tithing!) at his church, Magana just thought, “Shit, we’ve got this thing sitting around it storage anyhow, let’s show it off for a little while!” Although the church likes to make grand statements about its holy mission…

“When the Church hears the cry of the oppressed, it cannot but denounce the social structures that give rise to and perpetuate the misery from which the cry arises.” – Archbishop Oscar Romero (Aug. 1978)

… the truth is it has always taken in more than it gives out. If it wanted to sell all of its collections of art, relics, gold, wealth and properties, it could pretty much buy food for everybody in Africa for a hundred years. 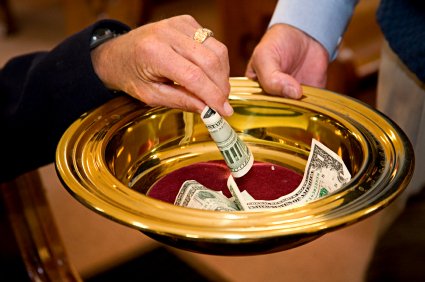 Who was St. Anthony of Padua?

But there’s more! St. Athony of Padua (originally from a wealthy family) was inspired to join the Franciscans by five Franciscan friars who went to preach the gospel to the Muslims in Morocco, where they were martyred (the first martyrs of their order).

Here’s what really happened: At the time, the Muslims had already rediscovered Plato, Aristotle and the Greek Philosophers (whom the church had banned!) and were significantly more advanced than the Europeans in nearly all categories. They had reason, social order, and ethics – while the Christians were in the dark ages and basically barbaric religious zealots, waging religious wars against everybody they could. Into this advanced Muslim world, came these religious quacks (St. Berard and his compansions – only one could speak Arabic), who began cursing Islam, the Koran, Prophet Muhammad, and telling everybody they should become Christians.

Because of their open preaching of the Gospel and their bold denunciation of Islam, people basically thought they were insane. (Damn Crazy White Folk!) However, when it became apparent they would neither go away nor stop preaching, they were apprehended and cast into prison. Having vainly endeavored to persuade them to abandon their Catholic faith, the Moorish king, in a fit of rage, beheaded them with his scimitar.

These were not “good” people who died violently at the hands of “bad” people. These were silly religious fundamentalists going into a culture they knew would reject them, denouncing the faith of the public, and desperately hoping to be martyred for it. (Martyrdom is the quickest, easiest way to assured heavenly rewards. Unfortunately, while it was somewhat easy to do when Christianity was being persecuted by Rome, it was devilishly difficult to do once Christianity had all the power. The only way to be “martyred” was to travel into foreign countries that weren’t Christian, and make an unholy ruckus until you pissed everybody off.)

Anyway – after these five “martyrs” found their reward, and their bodies returned to be revered and praised, a whole bunch of kids wanted to join the friars and go and get martyred too. St. Anthony of Padua was one of them. Unfortunately he got sick on the way to Morocco and turned around. He lived a long life (34 years, at least) and became known as a gifted speaker – such a gifted speaker that they cut out his tongue and made a relic out of it, so that people could come and look and say, “Yup, that’s a damn fine tongue. No wonder he’s famous.”

Absurd? No – this is Catholicism. What’s absurd is that these ridiculously superstitious medieval practices continue in modern times! The Church should be ashamed of its relics for three reasons:

One, because it goes against all of Jesus’ teachings endorsing simplicity, poverty and generosity (rather than taxing, hoarding and making enough profit to make shit like relics that can be kept in storage when everybody else is struggling to feed their families);

Two because it encourages people to worship and revere men who not only were nothing special, but aren’t even a good moral example;

Three because, while most of the Catholic Church has updated its teachings, trying to make them at least appear sensible to contemporary, educated folk, the practice of saving and worshiping body parts of dead people is vile.

If Jesus does come back, I hope the first thing he does is reduce all the world’s churches to piles of rubble and distribute the wealth that has been sucked out of the blood and sweat of the populace for 2,000 years in his name!