Taoism is one of the religions I appreciate. From the Lao Tzu’s tao-te-ching we get pearls of wisdom like “Those who know do not speak, those who speak, do not know” and “Even a 1,000 mile journey starts with a single step” – what’s not to like?

So I was a bit disappointed when I saw this ridiculous headline on the front of the Taipei Times:

Apparently the Beitian Temple in Hualien County’s Jian Township has for several years been setting up a 33-meter-high ladder made of 108 swords, and anybody who climbs it becomes a “Taoist Master.”

One of the devotees, who applied because a local deity named “Mad Monk” had told her mother she should, was Lin Ji-chi, a 33-year-old cosmetologist. If you think this story is already bad – it gets worse.

A temple official first climbs up through the “heavenly gate” and onto the dizzyingly high platform at the top of the ladder, where he prays to the gods to grant blessings to local people and throws pieces of paper with auspicious Taoist spells to worshipers on the ground. After praying, he asks the gods’ permission to start the ceremony by casting divination blocks.

Then, the worshipers who had to climb the sword ladder did so one step at a time, guided by the senior master. After reaching the platform at the top and worshiping the gods, they cast their divination blocks to the ground until they obtained “divine approval,” a sign that they had passed the test. Thereupon they officially became Taoist masters.

In other words – simply completing the obstacle course alone didn’t quality them; they had to ask the god’s approval… by casting lots UNTIL they got an affirmative answer! (This is like flipping a coin until you win). 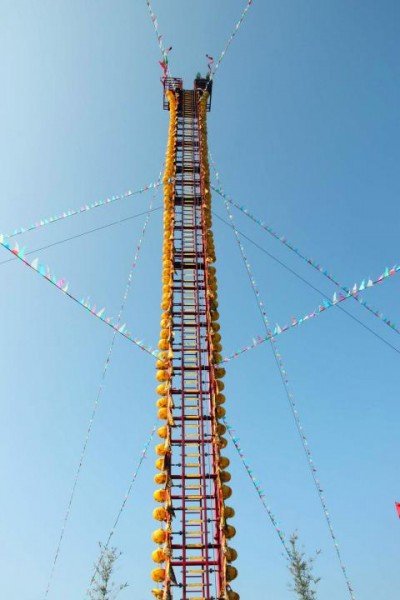 One of the “contestants”, Chen Pao-chu is a 55-year-old woman who was back for her 2nd year! Chen passed the test last year but kept it secret from her husband, which was “contradictory to one of the traditional wifely virtues, which is to help one’s husband and teach the children,” so she was disqualified.

I’m wondering, besides the obvious boost in social status (from housewife to “Taoist Master”), what are the tangible benefits of climbing up a ladder of swords? It has to be done barefoot, so there is some connection with basic penance like the Catholic flagellation – although for Taoism the point is not to strive or yearn, but simply to let go and allow your harmonious nature to flourish. So what does climbing a ladder of swords prove? How is it different than, say, bungee-jumping, or participating on a reality show obstacle course to win $50,000? Isn’t it actually, by virtue of its public nature, an act of pride rather than humility? In what possible way can it be a spiritual experience (other than the exhilaration and fear, which could also make bungee-jumping or skydiving a religious experience).

On the other hand, pushing yourself past your comfort zone and challenging yourself has always been a core part of devotion and piety. We need to be willing to risk and sacrifice, to take huge leaps of daring – if not to bring us closer to God, at least to expand our own limitations and boundaries. It may seem easy for me, but it was damn difficult for 55year old Pao-chu (she almost didn’t make it)

What do you think? Too easy? Commendable? What have you done to broaden your spiritual awareness? Does publicity nullify the benefits of the act?

If they do it again next year, I’m going to apply. There’s an empty space for “Taoist Master” on my resume.