If Jesus Christ wasn’t a historical person, where did he come from? Who created him? How does one go about ‘creating’ a god anyway; and who would worship a fiction?

To begin with, keep in mind that every figure from mythology, and even many pseudo-historical figures, had to be created by someone. For example, think about the classical Roman gods of Olympus; their complicated stories, romances, and personalities. Were they real? Are they based on a historical person? Who chose their names, and why?

It doesn’t matter if we can’t answer these questions with 100% accuracy; they were figures of the public imagination long before their stories were written down. Although today they may seem obviously fictional, they were believed in and worshiped for many centuries. In addition, simply by existing, we can presume that at some point, somebody made them up.

But how is a mystery/historical figure simply created? Consider a modern figure we can perceive more clearly: Harry Potter. J.K. Rowling wanted to create a character that would combine English culture and lifestyle, a magical-alchemical tradition, and (perhaps) the core story and values of Christianity. So she chose a name, she described his appearance, she created friends for him, a family, and finally a story, and included into her creation elements from many different traditions. Harry is the literary bond that allows this fictional world to exist, in him and around him.

Now let’s turn to a far older story, and ask the question, “Where did Orpheus come from?” This question is less easy to answer. On the one hand, we have a combination of history, myth and legend, and we don’t know which versions – if any – are ‘true’.

We must not expect to find the legend of Orpheus told as a simple and single story, without variations and without inconsistencies. That would be surprising, if we consider the different people who told it, the variety of the motives which prompted them, the remoteness of the times to which they believed their stories to refer, and the ever-present doubt whether even the basis of those stories, the one-time existence of their hero, is a historical fact or not. Even persons whose existence is incontestable, but whose fortune it has been to fire in some way, religious or otherwise, the imagination of their generation, have frequently in the course of time had a string of quite legendary stories associated with their name. With varying degrees of certainty these can be detached and the historical kernel at their centre laid bare. (Guthrie 25)

Orpheus appears into history as the spokesperson for the Dionysian mysteries. Although it may be possible that his legend began around the ‘historical kernel’ of a real prophet or teacher, academic consensus in general considers him to be fully mythical:

Orphism was a product of Pythagorean influence on Bacchic mysteries in the first quarter of the fifth century… but Pythagoras belongs to history, and Orpheus to myth. (Bremmer 24)

So where did he come from? I propose that when Pythagorean ideas were met by Bacchic mystery rites, someone decided to fuse them together. However, in order to justify and introduce this new creation, a fictitious ‘giver of laws’ was needed. 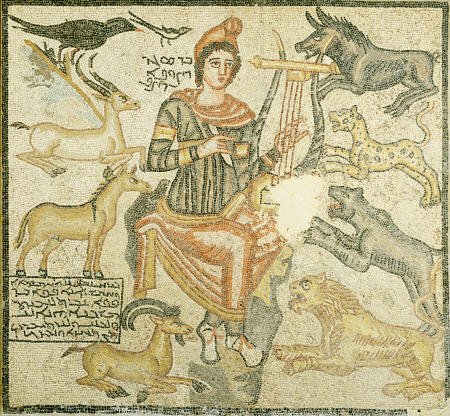 Due to an evolutionary new form of spiritual practice, combining Pythagorean influences and Bacchic mysteries, Orpheus was created as a divine spokesperson. It doesn’t matter that we don’t know who did it; we have the end result, so it must have happened.

We are far luckier with the example of Sarapis, an Egyptian-Greek syncretic god designed to appeal to the largest possible majority, thereby unifying the empire. Sarapis is a historically verified, deliberately planned religious synthesis, commissioned by Ptolemy I (323 BC – 283 BC). Although consciously produced, Sarapis worship remained immensely popular for centuries.

Ptolemy I was a general under Augustine and became ruler of Egypt. In 305/4BC he took the title of Pharaoh. He is also the ruler who conceived of and constructed the great Alexandrian Library. The kaleidoscope of animal-faced Egyptian gods was frowned upon by many Greeks, and religious differences and variation made it difficult to rule his subjects. So he chose two priests, and commissioned them to craft an Egyptian-Greek religious hybrid. For this task he chose one Egyptian, Manetho, educated in Egyptian history and born close to a famous shrine of Isis, and one Athenic Greek, linked with the mystery rites of Demeter and Persephone at Eleusis (Witt 52).

Sarapis combined Osiris and Horus into one figure. He was also identified with the Apis Bull, a popular Egyptian figure. His mother was the powerful goddess Isis. He came with a human face, as a man, but was also a figure of supernatural proportions. 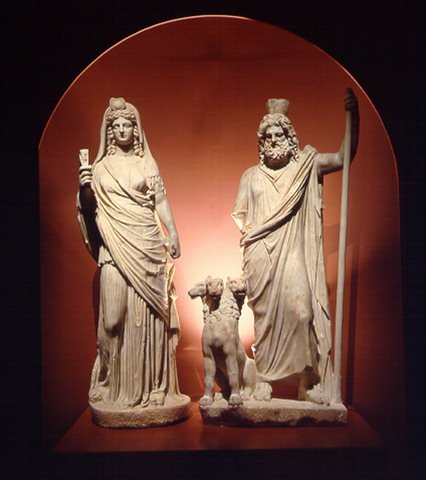 Zeus, ruler of heaven, and Hades, ruler of the underworld, were later combined into one, supreme new figure: “One Zeus, one Hades, one Sarapis” (Julian, Orat. 4, 135: FRA 538). Thus Zeus-Sarapis was sometimes shown on a throne as king of heaven, or with the three-headed dog of Hades, Cerberus. He was associated with the symbol of the snake, either in the form of the Caduceus used by Ascelpius, or as the head of Draco – symbolizing the return journey of the soul. Sarapis worship came packaged with his mother/consort Isis. Together they were an unbeatable pair.

Sarapis was deliberately created by the Ptolemaic theologians for export abroad. He had powers of assimilation to the leading gods of Greece and in time won international acceptance. Isis, too, became increasingly cosmopolitan. (Witt 55)

But of all the gods of the Mystery religions, perhaps the best-loved was Isis – loved for her warm humanity and for incarnating all the best aspects of woman as lover, wife, mother and widow. (Godwin 26)

Sarapis was regarded as a healer, with Isis; usurping the role of Ascelpius he became the guardian and savior of all mankind. Moreover, his form of healing was medicinal, rather than mystical: Ptolemy I built a temple of Serapis (the Serapeum) adjacent to the Library of Alexandria, where ‘doctors’ could study medicine and healing arts.

Next to the Alexandrian Serapeum was the great university: the cult of Sarapis and the establishment of the library and the museum were alike due to Ptolemy I. The Library was to overflow into the temple and the links were to remain unseparable till the final onslaught by the Christians. We know that in the temple there existed ‘pastophoria’. There were the quarters of the pastophors whose task was to master the medical texts and all the traditional magical lore of Egypt. (Witt 190)

The Serapeum seemed to have offered treatment similar to those prescribed by Ascelpius: bathing, incubation, etc.

Sarapis was seamlessly adapted into the magical traditions, becoming a supremely powerful magical name – equivalent to 10,000 other names.

Do this for I am your slave and petitioner and have hymned your valid and holy names, lord, glorious one…of ten thousand names, greatest, nourisher, apportioner, Sarapis (PGM XIII.637ff, qtd. Arnold 66)

I call on you, lord, holy, my hymned, greatly honored,….Sarapis; consider my birth and turn me not away, me,…(magical words)…who knows your true name and valid names…(magic words)…I hymn your holy power in musical hymn…(magical words)…Protect me from all my own astrological destiny; destroy my foul fate; apportion good things for me in my horoscope; increase my life; and may I enjoy good things, for I am your slave (PGM XIII 619ff) (qtd. Arnold 66)

Worship of Sarapis and Isis was expanded by the Roman Emperor Hadrian (117AD to 138AD), who encouraged expansion of Alexandrian religion. Hadrian also built the Pantheon and the Temple of Venus and Rome, as well as several opulent temples in Athens.

In our quest for the beginning of the story of Jesus Christ, Sarapis gives us a clear example of how a deliberately created religion, harnessing all the best parts of many different traditions, could unite the growing spiritual values of the Roman Empire. If Sarapis could be created, and yet still worshipped as a God, could Jesus Christ have also been made as a conscious attempt to dismantle the religious barriers between Rome and its conquered Jewish tributaries?

Surprisingly, the connection between Jesus and Sarapis goes much deeper: several ancient testimonies claim that Sarapis was worshiped by Christians, who used him almost interchangeably with the figure of Jesus Christ!

In Egypt those who worship Sarapis are Christians and those who call themselves Christ’s bishops (‘overseers’) are addicted to Sarapis. Jewish rabbis, Samaritans and Christian priests in Egypt become astrologers and soothsayers. The visiting archbishop is obliged to worship Sarapis by some and by others Christ. (Witt 235 (Athan. Vit anton. 90: FRA 561, 24)

In the Egypt of the time of the emperor Hadrian those who called themselves bishops of Christ are recorded to have devoted their souls to Sarapis. The link between the two faiths was the gospel of salvation. (Witt 54, phlegon, Epist. Ap. Vopisc, (Saturnin.), 8: FRA 280, 15)

The ‘time of Hadrian’ was 117AD to 138AD; this is still very early in the history of Christianity. Had the small Jewish movement started by Jesus Christ in Israel moved so quickly and grown so much that Jesus could be equated with Sarapis – a Greek-Egyptian synthesis? And how are we to reconcile the fact that Christians were ‘addicted’ to Sarapis? 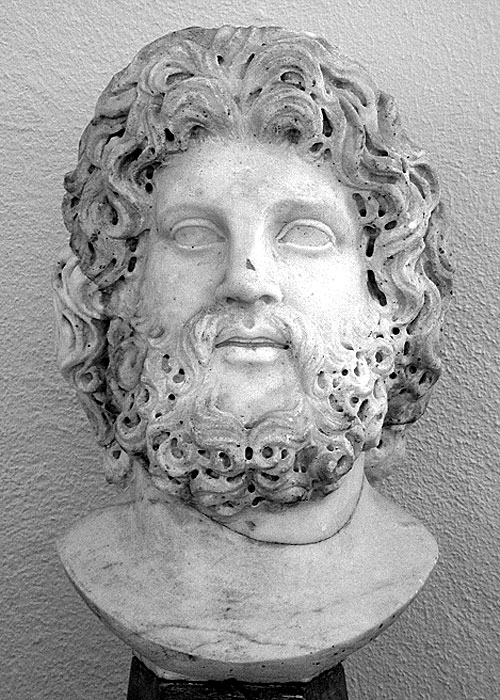 My argument is that Jesus was the next logical step in Hadrian’s campaign; a final evolution of the Egyptian-Greek composite figure of Sarapis, which was written to assimilate the stubbornly rebellious and violent Jewish people under the fold of a State Religion.

Christianity is a Jewish synthesis of Greek-Egyptian mystery cult tradition. Rather than surprising, the expansion of the popular cult of Sarapis (founded in Alexandria) to include Judaism (when the Jews of Alexandria were already creating interpretive, comparative literature) is entirely probable.

***Read our post In the Name of God to discover exactly how this new synthesis was created!*** 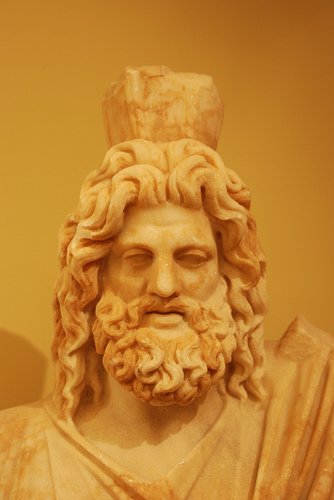 Such a synthesis had already happened for Orpheus, and again – deliberately – for Sarapis. Syncretism and a movement towards monotheism and one State religion, the already popular varieties of Mystery cults, and the Jewish practice of magic were already heading towards the creation of a Jewish mystery cult when political conflict in Jerusalem gave even more motivation to develop a new Jewish-Greek-Egyptian hybrid.

Thus, a magical name with a symbolic meaning was created. In the beginning, he was probably little more than an idea, perhaps a selection of wise sayings, preceded by “Jesus says _ .” As the story grew, his followers debated challenging topics such as whether or not to keep Jewish Law. The debate sparked heavy revision, and someone tied Jesus to Old Testament ‘prophecies’. Consequently, a story is created in which the character of Jesus fulfills the law. The rest of the details emerge, change and reshape in response to controversy, rather than as fide

lity to a genuine historical tradition – including the fact that he was historical! 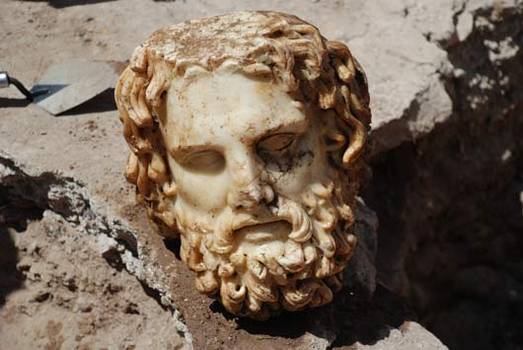 This theory explains how there could be so many controversies, disagreements and schisms in the early Christian communities: there was no “truth” for them to agree on, they were involved in the active creation of a faith.

There were, however, two defining features of this new Jewish mystery cult which were innovative, and proved to be fundamental in its future.

1. Christianity was a synthesis of the totality of the movements around it, so in a sense, Jesus Christ is ‘more’ than all the others.

2. Christianity sprung a side-movement which believed in the flesh of the resurrection, and hence of Jesus himself.