If you’re searching for the Real History of Thanksgiving, it might be for a school project or simply to satisfy your curiosity. Why do we have this great family holiday of good food and desert, a long weekend, just to remember what to be Thankful for? Well, you probably know the story of how the Pilgrims came over to America and landed on Plymouth Rock in 1621, and how the Indians taught them how to grow America food like corn, turkey, maize (wheat), and how after the first harvest they had a big happy meal together. Isn’t it wonderful how those clean, Christian pilgrims accepted the naked savages at their table like equals?

The problem with this story is that it’s a myth. It never happened. And even worse, the true history of Thanksgiving – the brutal and cruel story of what really happened between the white European colonizers and the friendly Native Americans – is not only masked but celebrated every year with turkey craft projects and pumpkin pie.

This here is the true history of Thanksgiving.

Why we celebrate Thanksgiving

Ok, the pilgrims of Plymouth did have a big first autumn feast. After their crop failed miserably, and they were about to starve in the harsh New England winter, the Native Americans bailed them out with supplies. Yeah Indians! So they invited one of them, their main contact, Massasoit, who invited a bunch of his relatives to join in on the 5 deer he brought. The whites were not pleased. After getting wasted on beer – they got trashed so often their governor, William Bradford, commented on his people’s “notorious sin,” which included their “drunkenness and uncleanliness” and rampant “sodomy” (source) – they scared all the Indians away with their guns.

But that’s just the beginning. The pilgrims of Plymouth were on a campaign of racial extermination. This was, after all, their promised land. They erected an 11 foot wall around the colony. Then a group led by Miles Standish went off to kill the Indian chief. Miles finally succeeded, pretending to be a trader. He cut off his head and fixed it outside the walls of Plymouth as a symbol of ‘White Power’.

An even larger group of religious white zealots landed in the 1630s and began an active campaign of genocide against the Indians. Settlers were rewarded for each Indian they killed, which resulted in the horrific pastime of killing and scalping Indians for money. That’s right, scalping was never a practice of the Native Americans until the Whites taught them how to do it.

Maybe you know the rest of the story; Native Americans were brutally decimated, hunted, stripped of all rights and dignity, treated as animals, while the white Europeans took over America as their God given right to pillage and plunder. This is nothing new of course; the Jews took over Israel in exactly the same fashion, destroying whole towns and cities reclaiming the land that God had promised them (in the burning bushes or other magical beings that talked to Abraham and Moses).

All thirteen colonies celebrated Thanksgiving by October 1777, and George Washington was the first president to declare the holiday, in 1789.

What are we really being thankful for? Obviously, for the fact that the Native Americans were overcome, and the colonies triumphed, giving us a white, Christian America! Read about it yourself in this memorial dedicated to the deaths of two Indian Chiefs by Miles Standish, that Pilgrim Hero who averted ‘serious disaster’ by launching a pre-emptive strike against the Red Skins. 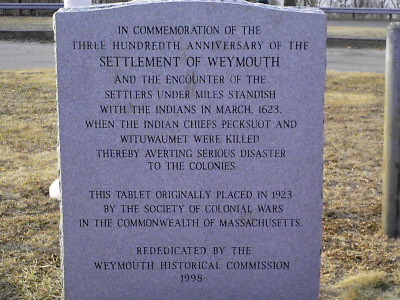