An article that caught my attention this summer is suggestively called “In Israel, diggers unearth the Bible’s bad guys.” The article continues to detail the archaeological discoveries by a team in Southern Israel, of what used to be the Philistines city of Gath. Although fairly objective, the article mentions the discovery that names similar to “Goliath” existed, as well as a temple with two pillars – which is reminiscent of the one Samson tore down with his super-human strength:

The memory of the Philistines — or a somewhat one-sided version — was preserved in the Hebrew Bible.

The hero Samson, who married a Philistine woman, skirmished with them repeatedly before being betrayed and taken, blinded and bound, to their temple at Gaza. There, the story goes, he broke free and shattered two support pillars, bringing the temple down and killing everyone inside, including himself.

One intriguing find at Gath is the remains of a large structure, possibly a temple, with two pillars. Maeir has suggested that this might have been a known design element in Philistine temple architecture when it was written into the Samson story.

Diggers at Gath have also found shards preserving names similar to Goliath — an Indo-European name, not a Semitic one of the kind that would have been used by the local Canaanites or Israelites. These finds show the Philistines indeed used such names and suggest that this detail, too, might be drawn from an accurate picture of their society.

The findings at the site support the idea that the Goliath story faithfully reflects something of the geopolitical reality of the period, Maeir said — the often violent interaction of the powerful Philistines of Gath with the kings of Jerusalem in the frontier zone between them.

“It doesn’t mean that we’re one day going to find a skull with a hole in its head from the stone that David slung at him,” the head archaeologist said, “but it nevertheless tells that this reflects a cultural milieu that was actually there at the time.” 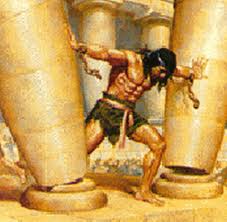 Something I’d like to point out that the team included South Koreans – who are notoriously apologetic and given to wide flights of fancy to provide evidence for their (often fundamentalistic) faith; a South Korean team also “discovered” Noah’s Ark recently.

The implication that such articles/archaeological digs gives is that the Bible records real history; in other words it is historically reliable. So when we find a big destroyed Philistine temple with two pillars, exactly as the Bible records, then maybe the writer was also recording the just as tangible history of a strong man who pulled down that temple with God-given powers; or when the Bible records a conflict with the Jews and the Philistines in which a small boy defeated a giant – that it may really have happened. And who knows – maybe it did? The point is less that the findings are interesting for those who feel drawn to biblical tradition, than that those researchers making the discoveries are probably already decided on what they hope to find.

(It would be interesting if some long lost Philistine descendants organized a dig, unearthed the same findings, and then sued Israel for reparations – after all, the Jews came in as violent, foreign conquerors; pillaging, raping and stealing land, livestock and women from the Philistines much as the Europeans later “Christianized” the heathen Americas.)