I’m loving DaVinci’s Demons – a new TV series about the life of the young Leonardo Da Vinci. From the first episode they managed to throw in a ton of intrigue and character twists.

The only thing is, this brash and daring, charming and handsome, half-insane genius almost certainly didn’t exist.

It’s hard to know what DaVinci believed, because he had to be secretive his whole life (hence his language codes and secret notebooks, etc.) This was a period when blasphemers and heretics could be locked up, tortured or executed. It’s doubtful that DaVinci would ever openly defy the church.

This is especially true, because he was employed by many churches to paint religious art.

Riaro, the agent of the Pope, confronts DaVinci and asks him to join the church’s cause.

“What’s NEXT?” (the desire for knowledge) is the question all men ask, says Riaro…

“Between the base animal and the enlightened man’s reach for God lies knowledge. You just want to know what’s next. I do to.” 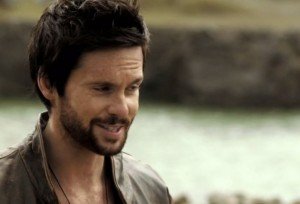 “That’s not what you want,” says DaVinci, “You want to SUPPRESS knowledge.”

“No… I want to administer it. Someone has to. Why not an agent of God?”

“Well if God exists, surely he intends his knowledge to be shared by all.” (Says the very modern, democratic and liberal DaVinci of the series.)

What an outrageously post-modern Americanistic idealism; God being entirely besides the point, democratic equality reigning supreme.

“The truth is,” DaVinci continues, “Progress frightens you and your ilk.”

“Not at all, we embrace it” counters Riario. 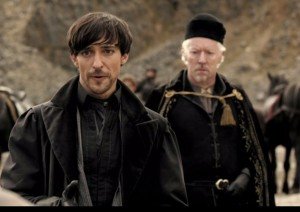 He’s a handsome, badass, rebellious non-conformist. The perfect hero for modern times, rebelling against the autocratic, corrupt government of the times (which happened to be the Catholic Church).

This all gets very interesting when we consider that DaVinci is one of history’s most recognized and beloved heroic figures – representing imagination and innovation and daring… and at the same time, the Catholic Church is STILL one of the biggest, richest and most powerful organizations in the world, and that the exact same discussion is still incredibly relevant.

I actually toured the Vatican for the 2nd time this month.

Inside the treasury, are a few selected items out of the thousands of precious objects sent to the Catholic Church in earlier days – ridiculous artifacts and trinkets covered in huge diamonds and gems and gold; millions of dollars worth of raw materials, generating millions of new tourist dollars just to let tourists look at them for awhile.

Does the Church embrace knowledge? Change? Science? Are they solving problems and helping people?

In Dan Brown’s new book Inferno, the hero is dealing with a madman who’s cure for overpopulation is to sterilize the global population. Surprisingly, unlike Dan Brown’s earlier books – the villain succeeds, and all the other characters kind of shuffle around and go, “Well, that’s too bad… but, it’s probably best this way, isn’t it?” There is no easy solution to overpopulation, but the crisis is absolutely critical and we are soon going to destroy ourselves as a species.

While the WHO launches campaigns to educate Africans about and deliver millions of free condoms, The Church, the novel points out, runs a counter-campaign to put the fear of Hell into them and convince them not to use birth control (leading to, not only more aids and other diseases, but also a toxic population explosion).

Isn’t it surprising that a popular TV show can characterize the hero as an atheist (at the very least, openly agnostic) and the Church as the evil, cruel, vicious enemies of freedom, reason and progress… but that a majority of its watchers are still believing Christians who go to Church every Sunday? Is there some kind of total mental disconnect?

Or am I wrong – are Christians in America becoming a minority (it certainly doesn’t seem so to me, but at least to do a show like this, our culture must have become pretty tolerant towards anti-religious statements, right?)

What do you think of DaVinci’s Demons? Do you think about your beliefs while you watch TV or keep entertainment and your faith separate?