I love Julianne Moore and Chloë Grace Moretz, and I think they were perfect in the roles of Stephen King’s “Carrie” and her crazy-religious-freak mother. But there was a lot about the 2013 movie adaption of King’s novel that was disturbing. And no, not just all the blood, violence, gore and death.

Carrie was a very Christian movie.

Of course the original story is already highly religious in nature, with Carrie being forced to pray for forgiveness by her abusive mother.

But the original is less judgmental and more open-ended. Carrie is seen as more of a tragic victim. Her wild, amazing telekinetic powers defy the neat boundaries of Christian orthodoxy. Sure her closeted, narrow-minded religious fanatic mother thinks those powers come from Satan. But there is no indication that King thought so – in fact Carrie seems to be using Carrie’s powers to criticize Christianity as backward-minded and violently judgmental.

On the surface, this appears to be the case in the movie also, which concludes with Sue Snell telling a courtroom:

“You want an explanation? Carrie had some sort of power. But she was just like me…but we pushed her. And you can only push someone so far before they break.”

So Carrie is just like everyone else. Everybody has the potential to be Carrie – so Carrie is a metaphor… but what does that mean?

It means that, through small moral sacrifices, she was taken over by Satan, and you can be too.

There are a few key indicators that we are dealing with, on a whole, a Christian universe where good gets rewarded and evil gets punished. We are dealing with characters who struggled with problems of moral complexity. The ones who make “good” choices like Sue Snell (Gabriella Wilde) survive. She was trying to redeem her “sin” of making fun of Carrie. She admitted her guilt.

Chris Hargensen (Portia Doubleday) on the other hand, was unrepentant and paid the price with her life. In case you missed what characters were supposed to be good and evil, they made it easy by giving Sue very white blonde hair and light clothing, and Chris very dark hair and black clothing. (It was reversed in the 1976 film, but today’s movie goers can’t tell right from wrong unless somebody has light hair and dark hair).

How Carrie sells her soul to the devil

It starts with little things like disobeying mother, and wanting to be liked and fit in, and be “normal.”

Then she starts thinking about boys, wearing makeup and dresses, and showing off her “dirty pillows.”

At first she says no to handsome Tommy Ross, but he wins her over. She keeps saying no, and he keeps tempting her… to the prom, for a dance, even to vote for themselves for prom king and queen.

He shrugged . ‘Let’s vote for ourselves. To the devil with false modesty.’ She laughed out loud, then clapped a hand over her mouth. The sound was almost entirely foreign to her. Before she could think, she circled their names, third from the top. The tiny pencil broke in her hand, and she gasped. A splinter had scratched the pad of one finger, and a small bead of blood welled.

And Carrie, after a moment’s pause, agrees even to this: “To the Devil.” A quiet but open acknowledgement and invitation to Satan.

Which is of course, where her magical powers come from. (God’s only play in this story is weak – she gets an immediate splinter/cut from giving into this treacherous self-voting. All sins carry consequences).

Because in a Christian worldview, even though magic and miracles and power and unnatural events are allowed to happen, when people use them they are from the devil. Unless they’re Jesus (more on that later).

Bad things happen to everybody. But Carrie let temptation get the best of her, and because of the Devil’s strong hold over her, she gave into her passion, emotion, anger and violence and let Satan’s power flow through her to destroy everything around her.

Later, when she goes home and washes off the pig’s blood (and the blood of all her classmates), her actions finally sink in and her moral responsibility starts up again and she cries, “What have I done, I’m so sorry, God forgive me” etc.

We don’t get this repentance in the book. Not only does Stephen King’s Carrie kill everybody, but she does it while giggling because they look funny as they fry.

King’s book finishes with this burnt into Carrie’s lawn:

CARRIE WHITE IS BURNING FOR HER SINS

In the movie, the message is written on her tombstone:

The book shows characters being remorseful, “If only we hadn’t been so cruel, if only we’d have reached out.”

Carrie was a product of child abuse and poor upbringing. She was “evil” because she was raised religiously, and believed herself evil.

That’s why she had to commit suicide (in the book, she just dies from exhaustion and various wounds). In the movie, Sue offers her hand to help her; Carrie very deliberately saves Sue but brings the house down to bury herself and her mother. Carrie knows and recognized that the judgment is correct and she needs to pay.

Which is pretty dumb. 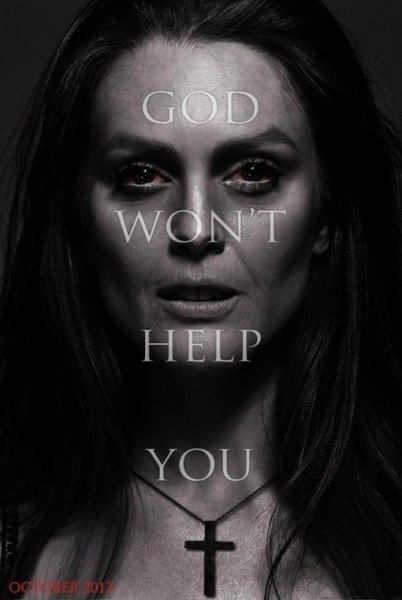 Note: The original Carrie was also written during the beginning of the Satanic Panic – the mass hysteria that Satanists were lurking everywhere; a reaction probably to Anton LaVey founding his Satanist religion in 1966. Books like the mega bestselling Rosemary’s Baby (1967) by Ira Levin, which turned into a the 1974 movie by the same name, warned of the violent dangers of secret Satanists living among us. William Peter Blatty published The Exorcist in 1971 and it was made into a horror film in 1973. King published Carrie in 1974 – so the belief and terror in Satan was at an all-time high. In fact King’s Carrie was really just cashing in on an already popular mass-culture phenomenon and morbid curiosity of Satanism. LaVey and his Satanists didn’t actually believe in any Satan, but were more like Humanistic Atheists just trying to be controversial, so the Satanic Panic, while being the backbone of contemporary exorcist/demon possession horror flicks, is all a bunch of hot air and bullshit. I’ll explore this history in more detail in my next book.

There are only two kinds of supernatural thrillers

Most of our literature and movies are about people with amazing powers. Twilight for example, made vampires not evil, but cool and misunderstood. This “humanizing” of monsters has been going on everywhere – zombies, werewolves, monsters, etc – have all become our heroes, going on journeys of self-discovery and learning to use their amazing powers.

Unless it’s a horror movie, in which case, they come from the devil.

We’re either in a “normal” movie with “normal” contemporary morals, and supernatural powers are as common as they are in Xmen, or we’re in a Christian movie, where all powers are evil and everybody’s either going to heaven or hell.

Because there’s only one Jesus.

Which is why it’s more than a little strange that Jesus didn’t kill himself.

Jesus grew up Jewish but surrounded by pagan culture. Like Carrie, he was told he wasn’t and couldn’t be “normal.” He was special, loved by God, had to be kept apart, practice different cultural norms like what clothes to wear. He wasn’t allowed to “mix” with the others. But he saw and was probably tempted by all those relatively happy and charming (and unusually educated and intelligent) Romans and Greeks.

Jews believed in demons and in magic and witchcraft, and some of them believed you could control the demons by using their names and get you to do stuff for you. In fact, King Salomon used a magic ring to summon the Lord of the Demons and have him and his demon hoard build the first temple.

This was OK because the Old Testament is a pre-Christian text without clear dualistic principle deities of Good and Evil.

There were multiple gods, but the Jews were only allowed to worship one.

So when Jesus first realized he had magic powers, like Carrie, he probably would have been scared and confused.

Although Christians will rebut that Jesus always knew his true role, there are many places in the Bible where Jesus needs to think, plan, or appears to doubt, fall into anguish, or be confused. His last words according to Matthew 27:46 are: “My God, My God, why have you forsaken me?” (Matthew portrays him as a human who suffers. John portrays him as a superman who feels no pain and is omniscient. No wonder it took over 1000 years of church councils to agree on what percent of Jesus was a man, and what percent a God…)

If Jesus was in a very strict religious family, like Carrie he wouldn’t be able to accept realities which don’t fit into the neat boxes of pre-established belief systems. Fortunately, Jesus was born in a time of unprecedented religious freedom, where a whole bunch of religions were coming together from all over the world and sharing knowledge, where people were open minded and tolerant and prayed to whichever God was closest (or to none at all if they chose). And were practically everybody practiced magic tricks and believed in supernatural power.

Why it’s all a publicity stunt and propaganda

The thing that bothers me the most about this whole “Horror movies based on Demonic possession” genre is that they make Satan a puppet. What does Satan get out of taking over poor Carrie, killing a high school full of kids and burning down a town? He manufactures fear and loss, which drives people to believe in and accept God.

We are led to believe that Satan is intelligent, but that he keeps interrupting our happy lives to scare us with gore and violence and fire. Who benefits? God and religion. Satan never benefits from stories of demonic possession. Which makes it likely to assume, that IF Satan exists, and IF he’s intelligent and trying to oppose God, what Satan is REALLY doing is trying to make us happy.

He’s getting rid of trauma and problems. He’s stabilizing our emotions, our economies, our nations and culture. He’s decreasing intolerance, racism and injustice. He’s trying to feed the poor and heal the sick. Because that’s the only way to make people stop believing in God – when they have no problems and are perfectly happy and can create everything they want out of life, they won’t let themselves be controlled by fear.